Or that’s the sound that this made: 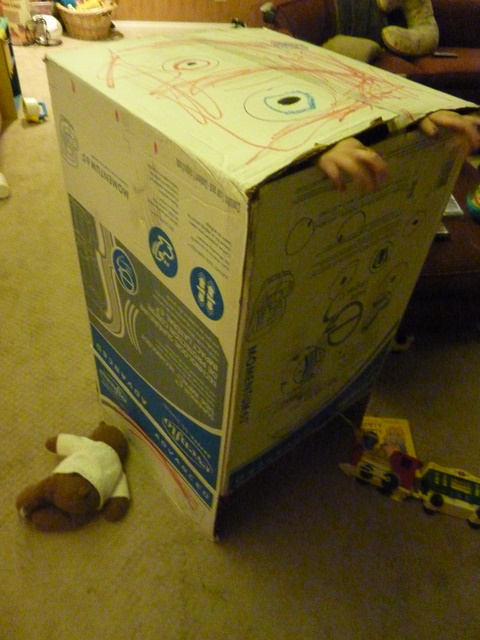 Eleanor and William (who were inside) told me that they were a “four-legged monster.”  They drew about a dozen eyeballs on the outside of the box, and also informed me that the red scribbles signified “creepy blood.”

After tromping around the sunroom and moaning for a few minutes, I heard a little whimper, and Eleanor crawled out.

“Whoa,” she panted, “I think I kind of freaked myself out in there.”

Awww.  Ain’t he cute?  I had the pleasure of witnessing the elementary school Halloween parade this morning, and Jeffrey was thrilled to walk with his class.

In case you couldn’t tell, he’s a centurion — or, as he puts it, “a Roman captain of the guards.”  Not some common foot soldier, oh no.  He became interested in the costume after recieving a Roman Playmobil set for his birthday.  Of course, yesterday he came home from school insisting that he had to change his costume to a mummy — or rather, “a Roman mummy” — but gave up once I told him that we didn’t have any “mummy wrapping stuff.”

Hmmm.  Do you think there ever were any Roman mummies?  You can see it — some Roman stationed at the garrison in Cairo, who converts to  . . . um, Ra-worship or whatever, and is embalmed after his death?  Eh?  Should I be staying away from the candy bowl?

And here’s Eleanor at her preschool this morning: 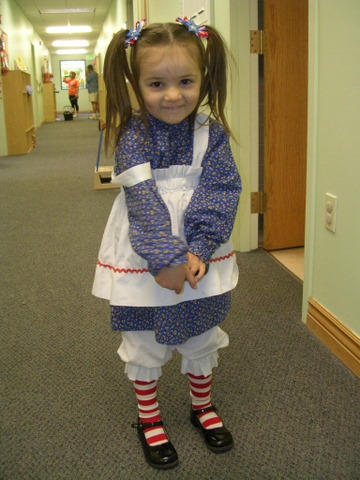 She is wearing the Raggedy Ann costume that my mother made for me when I was three years old.  My mom’s been saving it for decades, and now the granddaughter finally gets to wear it.  The striped kneesocks are, in my opinion, what elevates this costume from cute to awesome.  Awwwww!  There’s a homemade crepe paper wig that goes along with this costume, but I’m partial to the pigtails, myself.  (Truthfully, my only memory of wearing the costume as a three year old is the sensation of the crepe paper rattling around my face.  I didn’t like the wig, but Eleanor thinks it’s cool.)

William’s going to be a sheep for Halloween, but we don’t have any pictures of him in the costume yet.  It’s the costume that Jeffrey wore when he was one, featuring a hat that Brian knitted himself.

For supper tonight, we’re having sausage chowder in little pumpkin-shaped bread bowls that I found at the grocery store, and I’ve managed to obtain a box of the ever-adorable Halloween doughnuts from the Banbury Cross bakery.  It’s a box of doughnuts in the shape of cats, bats, ghosts, and pumpkins, complete with candy corn eyes and sprinkle decorations.  Squee!

Of course, the best part of the evening will be giving out candy to kids with our fake-hand bowl.

For those of you who haven’t seen it, it’s a big plastic bowl with a fake hand glued to the bottom.  You put your hand inside the fake one and find a secret black glove that is sewn to the inside of the bowl.  When the bowl is full of candy, the glove is obscured, and when kids reach in for their treat, you can reach up and grab them from the inside of the bowl.

Little kids (like, age 4 and under) don’t think that this is scary, just confusing.  It’s the older kids who have learned to be scared, to expect a trick when told to take their own treat.  Some kids want to put their hands in the bowl and get grabbed over and over again (although I’m always careful that they only take one piece of candy). It’s fun.  And inbetween trick-or-treat visitors, I get to sit on the porch, eat doughnuts, and read a book.  What can be sweeter than that?