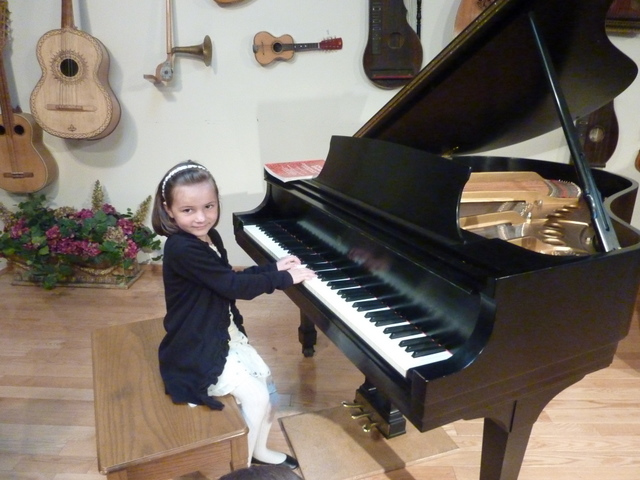 I’ve found that lately the best motivation to get Eleanor to practice her recital pieces is to let her play with the plastic busts of Beethoven and Rachmaninoff that I found at the thrift store.

If she plays her little arrangements of “Sonata Pathetique” or “Vocalise” a few times, the statues come down and give her kisses.  If she practices more, Eleanor gets to scratch the composers on the head and I make them moan with pleasure.  When she practices very well, then Beeth & Rach “go crazy” — I make them dance across the keyboard, up and down Eleanor’s arms and around her head while making Daffy Duck-style whoops. Eleanor loves it.  And we play it again.

Disrespectful, you say?  Maybe, but I think Sergei and Ludwig would be DARN HAPPY to know that little girls of the 21st century are still learning and playing their music, and to heck with what happens to a little plastic statue.

All the hard work paid off yesterday at her recital.  Our main focus in the past week was to get Eleanor to keep playing to the end, regardless of whether she freezes or makes a mistake or whatever.  For those of you who don’t play an instrument, please understand that this is very difficult to do.  A lot of adults can’t help stopping to correct themselves.  Learning to ignore errors and keep going is a skill of supreme confidence that usually only comes with the self-flagellation that is repeat public performances.

Anyway, the strategy was successful — in her performance, Eleanor totally froze during her solo piece, BUT after an excruciatingly long pause, she eventually pulled herself together enough to come to some kind of finish.  Whew!

The second piece she played was a duet that I performed with her.  Did she make mistakes?  Yes, but you can’t tell — she just skipped over them and kept going.  Yay!

I am so sick of “Here Comes Santa Claus.”  It’s been playing in my house, in one form or another, at least 3-5 times a day since late September, often with miscellaneous grunts of frustration thrown in for spice.

People who complain about seeing Christmas ornaments in stores the day after Halloween have NOTHING on a home with a young piano student.  There have been times when I felt that hearing even one more note of this song would be enough to send me over the edge.  But it’s been worth it.

November marked the completion of Eleanor’s first year of piano lessons, and either as a result of this or perhaps other factors, her teacher decided to give her a very advanced piece to play for the holiday recital this year.  Her arrangement of “Here Comes Santa Claus” features eighth notes, flats, sharps, and lots of tricky fingering (cross-overs, position changes, and other things that frequently foul up the beginning pianist).  This is unusual for a kid who is still in the “primer” stage of lessons.  She’s only five, and to tell the truth, I had serious doubts when I first saw the music.

The great thing is that Eleanor tackled the project with enthusiasm, and after many, many, MANY days of practice, had it pretty much ready to go by last Saturday’s recital.  She practiced walking up to the piano by herself, playing without too much wiggling around on the bench, and taking a bow afterwards.  I’m very proud of how she’s able to focus and work hard.

On the day of the performance, she eagerly slipped into her red ruffly Christmas dress (“with a matching headband!” she told anyone who crossed her path), packed up her music folder, and we all headed down to the recital hall.

She was the first person playing in the program . . . and she FROZE.

Yup.  That shiny black Steinway on stage was nothing like the piano at home.  She didn’t seem nervous or upset, she just looked puzzled:  “Where are my fingers supposed to go again?”  After a few minutes of being lost, her piano teacher came up and sat next to her, opened her music, and pointed out where she needed to be.

Then Eleanor and I played a duet called “The Snow Lay on the Ground” together, which went off without a hitch.  Everyone praised her work, and then she got to go eat cookies.

If there was anything about the performance she found upsetting, she hasn’t mentioned it.  When we got home, we made a video of her playing it without mistakes, and she seemed very pleased by that.  Besides, we were going to a performance of “Nutcracker” that evening in Provo.  It’s simply impossible for a little girl to be upset when she knows ballerinas are next on the menu.

I’m so proud of my little girl!  And best of all, I don’t have to hear a single thing about Santa Claus Lane EVER AGAIN.

Eh, well.  How about one more time: