This year, Martin Luther King Jr. Day fell on Katie’s birthday.  Can we be forgiven for focussing more of our attention on her?  She is the ripe old age of two.  In case you forget her age, just wait a moment.  She’ll eventually do some semi-disastrous thing and remind you.

Both Brian and the kids had the day off from school, so to celebrate, we hit the slopes!

That is to say, we walloped the mountainsides with inflatable penguins.

Sledding!  Which does not come cheap in these parts, especially since what I’m used to paying for sledding is nothing. I’m sure there are sneaky little hillsides in the Snoqualmie Pass where one can sled for free without being cited by the snow police, but I’ve yet to locate any of them.  So the state parks-run Hyak sledding hill for us it is.

And, well.  It is nice to have heated bathrooms on hand, if that’s what the entrance fee pays for.  Ahem. 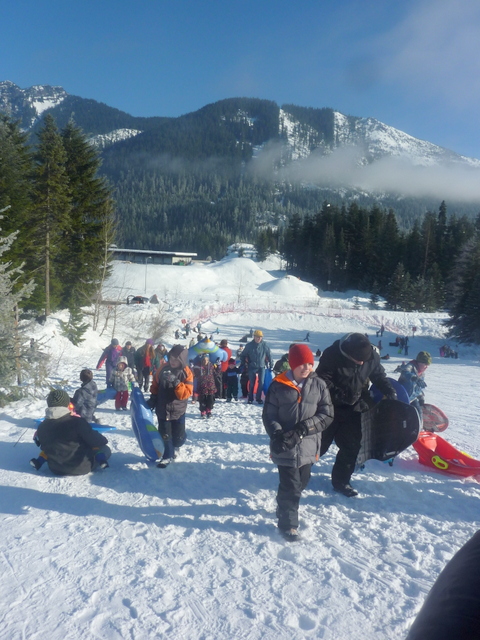 Much to my surprise, Katie loves sledding.  None of my other children enjoyed it when they were two, but Katie just squealed, laughed, and wanted to go again and again.

That is, until she got sick of wearing her mittens, and refused to put them back on.  Instead, she wanted me to hold her in my arms and blow hot air on her fingers to keep them warm.  That’s when I decided to retreat back to the minivan for hot cocoa. 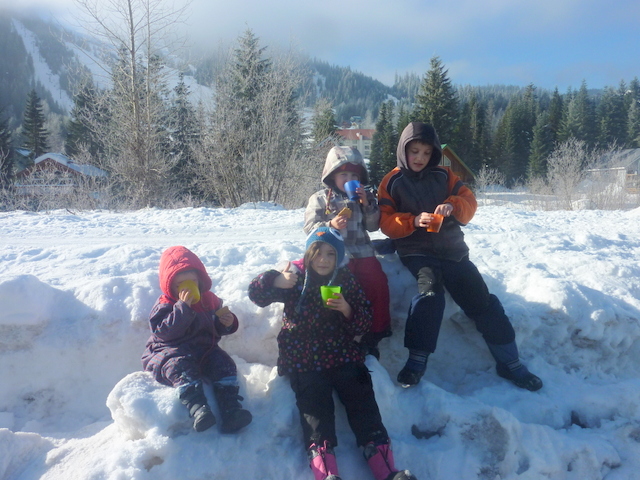 During that break, Katie somehow managed to flip on the van’s headlights without me noticing and drained the engine battery.  Because I had obviously forgotten that she was two, and had to remind me.

Luckily, we were able to get a battery jump from other kind families and get home to hot pizza.  Yay, birthday memories . . .

The kids had a four day weekend over President’s Day, so we decided to head down south and take advantage of the mild winter weather and cheap hotel rates.  (Really.  A place called the Bumbleberry Inn gave us a room for $45 a night.  Wowsers.)

Highs were in the low 60s, and it was great to shed our coats and go “walking in the top of the mountains,” as William had been begging to do.

Best of all, it wasn’t overbearingly crowded.  In summertime, Zion Canyon feels like an amusement park, with hikers shuffling through on each other’s heels.  During our winter stay the park wasn’t anything near empty, but it was uncrowded enough to give us some nice solitude on our hikes.  Brian has declared that he never wants to visit Zion again in the summertime.  Hear, hear.

The downside of the warm weather was muddy trails.  But Eleanor found this rather thrilling.  She purposely trod through the thickest, stickiest ruts, singing “Mud!  Mud!  Mud!  Mud!” at the top of her lungs. 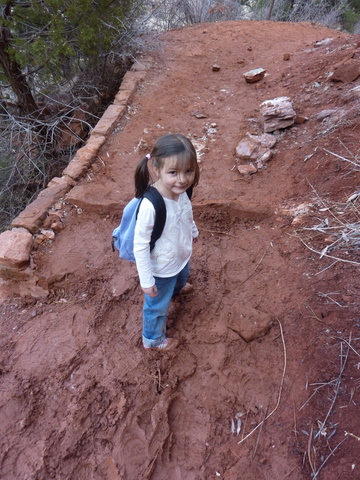 She was such a good little hiker — halfway through our first hike, she turned to us and cried, “Do you know what?  I haven’t whined a single time during this hike!”  It was true, she hadn’t; Brian and I hadn’t even realized it before she pointed it out.  After that, whenever she was about to get cranky on the trail, we reminded her of how she didn’t whine, and she quieted down.

Mud!  Mud!  Mud!  Everyone’s shoes got a nice little coat, as if we’d all been dancing in a bottle of Burnt Ochre. 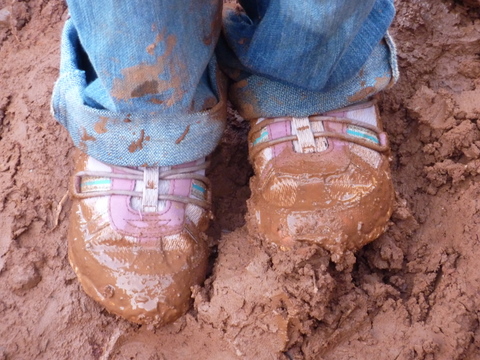 One of the trails we chose had a lot of spur trails and no directional markers, so we ended up going the wrong way, all the way to the top of one of the little valleys in the Court of the Patriarchs.  It was still beautiful, even if the trail eventually disappeared.

Jeffrey loved the Emerald Pools, so much so that he did not heed our warnings about hiking with wet shoes.  Alas and alack.

Brian’s dad, Randy, joined us for the Emerald Pools hike (he had caravanned down with us, in order to visit extended family in Cedar City) and was invaluble when it came to holding children’s hands on the steep parts of the trail.  At one point, he was occupied holding both William and Eleanor’s hands, and an older, white-haired gentleman who passed us took the time to tell Randy that “you should enjoy them when they are so young like this — they grow up so fast!”  Apparently, the white-haired man was under the impression that Randy was the children’s father!  Randy decided to take it as a compliment to be taken for a 32-year-old, although when we later bumped into that white-haired man again, he took care to say “Come along, grandchildren” in as distinct a voice as possible.

The only real challenge to the trip was finding places to eat for dinner.  Most of the cheap restaurants in Springdale were closed for the season, or only serving lunch.  But a exploratory drive to Hurricane revealed a Chinese buffet place that was, we thought, a perfect way to ring in the Year of the Tiger.  Plus, they had Jell-O.  You haven’t really lived, cuisine-wise, until you’ve watched your seven-year-old try to eat Jell-O with chopsticks.

In the evenings, we holed up in our hotel and watched the Olympics while munching on microwave popcorn.  I don’t know if we got very much rest, sleeping all together in the same room, but we certainly returned to Salt Lake feeling much less stressed. 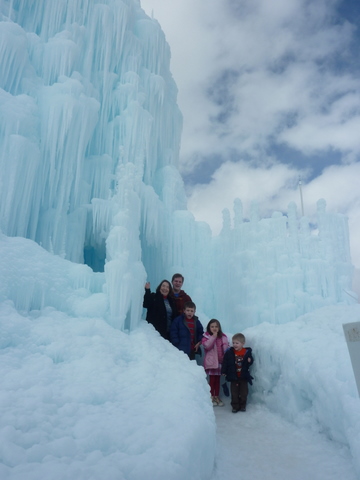 Two weeks ago we made the trek up to Midway to see the ice castle that’s been making a lot of local news.  It’s a series of towers built using an underground sprinkler system, hoses, PVC pipe, and loads of ingenuity.  It was absolutely beautiful, even if it unforunately caused me to get “Theme from Ice Castles (Through the Eyes of Love)” stuck in my head.  You know:

I’ll spare you the rest.

This tower had a tunnel going through it, which I think is impressive as all get out.

The towers were built by Brent Christensen, a local businessman who has no background in art but is pretty darn amazing anyway.  He was inspired to make these towers after he saw the results of a broken sprinkler head spraying water into long icicles on someone’s lawn.  The building began back in November, and he’s still working on them — even on the day we were there, he was climbing on top of the towers, fusing icicles together and tinkering with water systems.  It’s gorgeous work, I hope he does it again next year!

So how long do you think it will take to melt come spring?