This morning, all of the muscles on the inside curve of my left arm were stiff — from the joint of my left thumb down to the elbow. I couldn’t figure out why that was, until I picked up William and propped him up on my left hip, as usual.

That’s right — my arm was stiff and sore because William — who is currently weighing in at around 20 lbs. — is pretty much demanding to be held ’round the clock these days. So much, that my arm is cramping up in my sleep.

It’s all because of his tooth, really. Yes, that’s right. Wimmy has a lil’ bumpy razor-tooth that took its sweet time emerging from his lower gum this weekend. Saturday night was a scream-a-thon; on Sunday he hurt so much that he couldn’t nurse well. He just clutched his gum and howled. Poor fella.

Oh — oh — and did I mention the bad haircut? Yes, another Baby Milestone that we’ve managed to botch spectacularly. Brian was convinced that the long wispies on Wimmy’s head and the downy tufts over his ears were causing him trouble. You know, getting food stuck in them and so forth. Moreover (and I suspect that this is the real reason) people kept confusing Wimmy for a girl. (Oh. No. Not. That.)

So, after much cajoling, I agreed to let Brian snip a bit. The results? 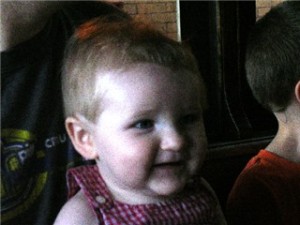 Let’s just say that there’s a good reason why we’ve never cut Eleanor’s hair, ever. It’s because Brian and I are completely lost when it comes to cutting hair. William now has a too-short fringe of fluff bordering his head that begins parallel to his brows, but then rockets up at a 45 degree angle just to the right of his nose. Did I mention how hard it is to get a 9-month-old baby to hold still for a haircut?

The ear tufts look like they got nibbled on by rats.

Fortunately, the whole experience was cut short (heh) when Brian accidentally scraped the top of Wimmy’s ear with the scissors. So not only did William go to bed that night with a bad haircut, but with his ear pathetically bandaged to the side of his head. Poor lil’ guy.

At least people aren’t confusing him for a girl. Now they just say, “Oh! He got a . . . haircut!” Or if I talk about the fringe, they say, “Oh, good! I didn’t want to ask what had happened!”