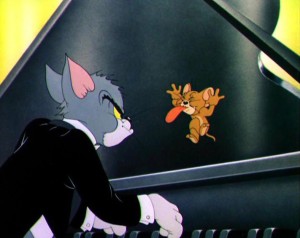 In my last post, I described how Jeffrey, out of fear for the mouse that had snuck into our kitchen, had increased his piano time in the hope of scaring it away.  He was, specifically, practicing pieces for his recital, which took place this past Saturday.

And he done good!

Jeffrey had been practicing his pieces since September, and the learning had been slow.  So slow, in fact, that his teacher suggested that perhaps this year might not be the best time for his first public performance (she didn’t want him to do badly, and have a negative experience).  I was miffed at the idea, and Jeffrey was enthusastic about performing, so we cranked up the practice.

Every day for a week, Jeffrey would run through his entire performance — including the bows — about ten times. Five in the morning, five in the evening.  He had a solo called “Let’s Boogie,” followed by a duet called “It’s Natural to Have a Flat” (what is it with sheet music and the bad puns?) that we played together.  He not only had to play the pieces perfectly (er, well . . . perfectly-ish) but had to put the music on the piano himself, keep his eyes on the music instead of on his teacher, wait for me to get on stage so we could start together, etc.

A pretty tall order for any seven year old, but especially for Jeffrey.  But he took it seriously — whispering the notes of his song and air-fingering when we were in the car, stepping to the piano to play it through at odd moments.

Last Wednesday he had a group master class, during which his teacher would decide whether or not he was ready to perform.  I nibbled my nails the whole time, but Jeffrey was awesome — his music was “gourd-geous.”  (She had given him a gourd to take home.  What is it with the bad puns?!?)

On Saturday he was the very first kid performing in the program.  He marched up in his little blue sweater vest and did everything perfectly (well, perfectly-ish), and then I walked up next to him and we played together.  So much work for only two minutes of music!

There was plenty of applause, especially from both sets of his grandparents, and as we rose to take our bow, Jeffrey reached down and wiped his nose on his vest.