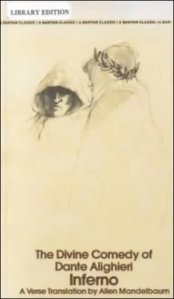 This week my aforementioned Olde Fashioned Colde Virus morphed into Ye Devil’s Sinusitis and then progressed merrily on into Thine Ear Infectione o’Doom.

Not much work was done on the book this week — my writing time was 100% staring at the screen while miserably pressing a cold compress onto my face and counting the hours until my next dose of antibiotics. Oh, wait — at least 30% of that time was spent making mincemeat out of many, many boxes of Kleenex.  All of Friday was devoted to harassing a doctor into giving me stronger medicine (she did.  As she put it, “it looks like you have a giant blister on your eardrum”).  Owwwwww.

The best thing to do, I figured, was to spend time reading about people who were infinitely more miserable than I was, and so out of my mass of wallowing self-pity I turned to Dante’s Inferno.  It’s simply impossible to feel bad about constant ringing ear pain when reading about being buried alive with 1,000 Arch-Heretics in a flaming red-hot coffin.

I’ll admit that my desire to Inferno-ize myself was also owing to running into one of my old literature profs. at the grocery store (he remembered my name, which is stunning) and feeling residual guilt at not having read Inferno as thoroughly as I was supposed to for class.  Also, I heard about the new video game based on the poem, and found it both intriguingly bizarre and unintentionally hilarious.

In the game, Dante Alighieri is a scythe-wielding ex-Crusader who engages in hand-to-hand combat with Marc Antony and Cleopatra at the end of Level 3.  (Hear that? It’s the sound of hundreds of Dantean scholars all spitting out their rose hip tea at the same time.)

Oh oh oh — and Beatrice is also in hell, because Satan wants to make her his bride.  Thus effectively giving one of the greatest epic poems in world literature essentially the same plot as Super Mario Bros.

May I add that Super Karamazov Bros. would also make for an awesome video game?  Especially if it took the steampunk route . . .

Anyway, I’ve much more to write regarding Inferno, but I’ll save it for further posts (if I can scrounge up the time).  I’m really enjoying this read, it’s much more enjoyable than when I read it as a harried undergraduate.  I’m in Canto XVI right now — Seventh Circle, Third Ring, Second Zone, if you’re interested.  Thank goodness for the map in the back of the book.

One thought on “Infernal Devices”