Eleanor celebrated her 5th birthday a little over a week ago.  For the first time ever, we cast aside our family rule of limiting the number of invitations to the birthday child’s age.  (Ex: you turn seven, you have seven guests.)  Eleanor has been going to a dozen or more birthday parties all year long at school, so it seemed kind of rude not to reciprocate.  Personal inconvenience is no excuse for hurt feelings.

Anyway, this is why we had FOURTEEN children show up for the party.  Really, it wasn’t that bad.  If anything, it highlighted the differences in gender among the kids.  The girls waited quietly for their turn playing Pin the Tail on the Donkey or whatnot, and the boys scrambled off to play with toy trucks.

(Granted, we probably shouldn’t have been playing games in the same room as the toys.)

As per tradition, Eleanor and William helped me make a kind of candy lollipop we call “Tiger Tails” as gifts for the kids.  It’s marshmallows dipped in caramel, then dipped in pink confectionery coating, then drizzled with melted chocolate.  I found this lollipop tree at a thrift store, and it made for a really spiffy display.  (My cookbook calls this candy “Heaven on a Stick,” and as a coincidence, “Stairway to Heaven” was playing on the stereo as we put them in the tree.  Har.)  I’d take a big pink lollipop over a goody bag any day, wouldn’t you? 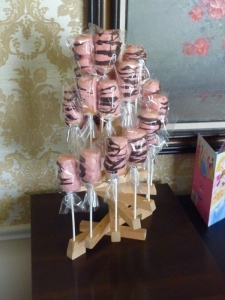 We also played a game called “Musical Islands.”  It’s similar to Musical Chairs, except that we use towels on the floor, and nobody is eliminated with the removal of towels.  At the end, all of the kids were giggling, trying to cram on top of one towel.  Hee.

Brian and I made these paper kites using this very clever guide I snipped out of a magazine years ago.  You make three folds in stiff paper, add a wooden skewer and two pieces of tape, and voila — instant kite!  We hid them all in a box and used it as the prize in a treasure hunt.

Eleanor requested a big chocolate cake this year.  The frosting is unusual — it has both milk and semisweet chocolate chips in addition to sour cream and confectioner’s sugar.  It tastes like a melted candy bar.

My parents and Brian’s mother were able to come up for the party, as well.  My mom couldn’t resist giving Eleanor this sweet little doll.

Eleanor once again declared this “the best birthday ever.”  Success!