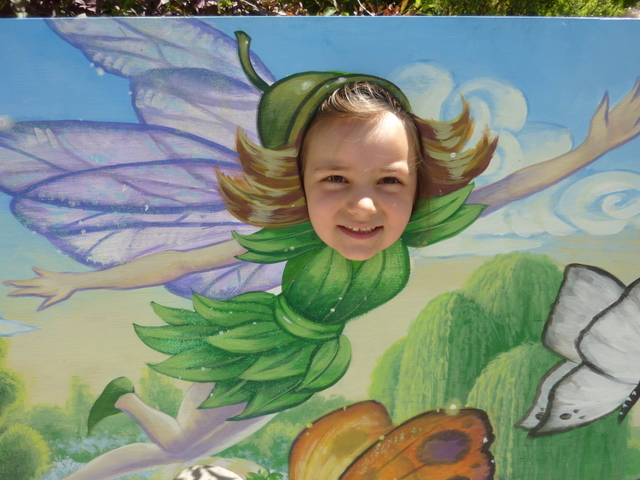 Today my mother-in-law and I took Eleanor and baby Katie to the Princess Festival down at Thanksgiving Point.

Lo, it doth rocked.  I mean, how can you not love this picture of Ellie with Prince Tamino from The Magic Flute (which was performed as a rather nice stage play, not an opera)? 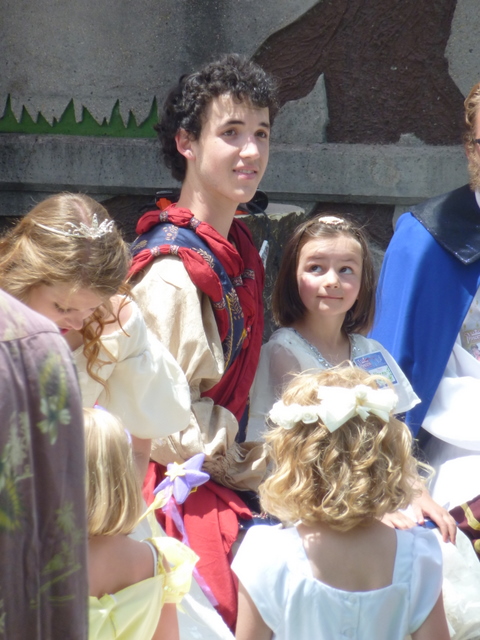 I’ve been describing the festival as “like Disneyland, only without the rides.”  That is, it’s just about meeting the fairytale characters.  The wicked stepmother was especially cute, hamming it up grandly for the Cinderella show: 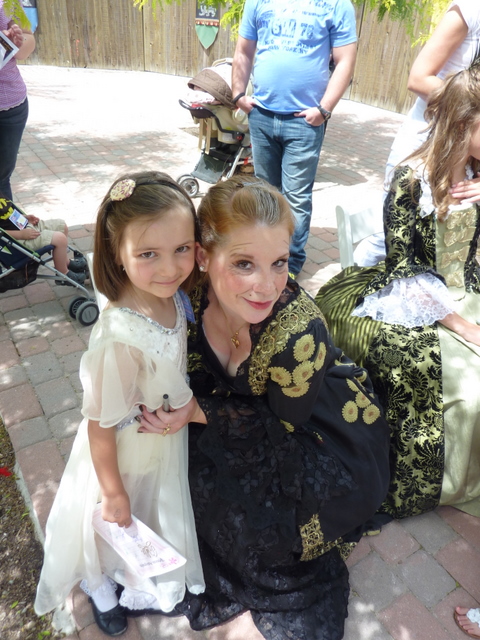 Alice and the Mad Hatter had a tea party in the hedge maze.  I’m guessing that the actor potraying the Hatter hadn’t read the books, because all he said was “How is a raven like a writing desk?” over and over and over again. I wish the actress playing Alice had responded with her lines from the book: “I think you might do something better with the time than wasting it in asking riddles that have no answers.” (Want a real answer to the riddle?  Click here.) 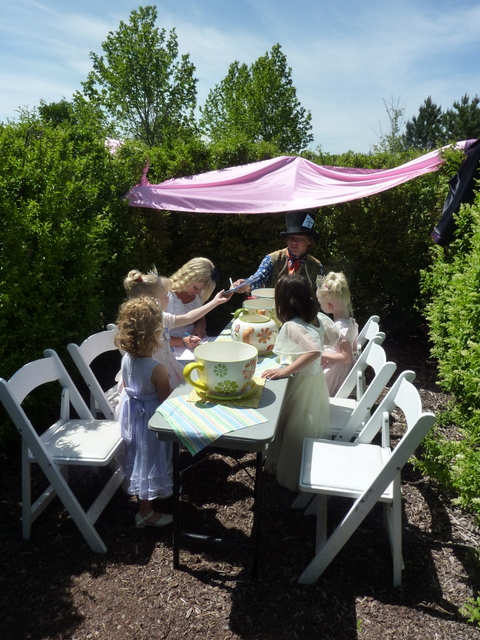 The other half of the maze held Beauty and the Beast.  Eleanor gasped when she saw them: “Mom, he really is a beast!”  Note the silk roses tucked into the hedge.  Nice, eh? 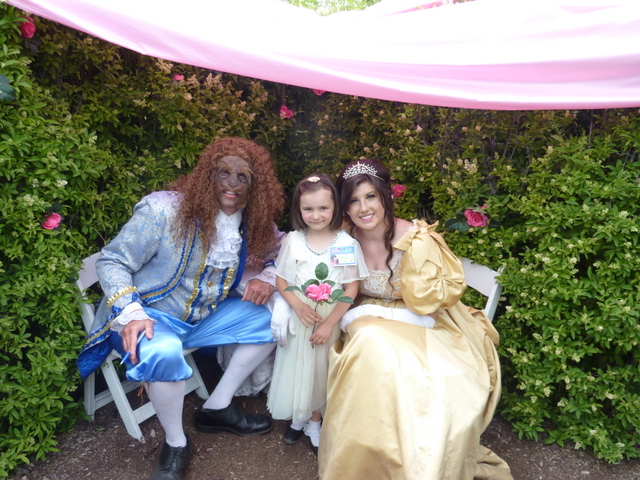 I also appreciated that the references to the original fairy tales.  Hence, we saw Aladdin with Scheherezade, although . . . that’s kind of meta when you think abou it. 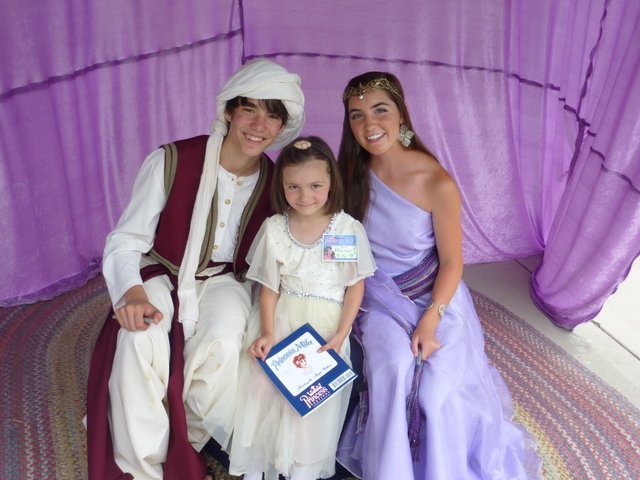 And how great is it to sit on a pile of mattresses with the Princess and the Pea?  Eleanor was asked if she felt a pea, and the response was “Huh?”  I guess we haven’t read that story lately! 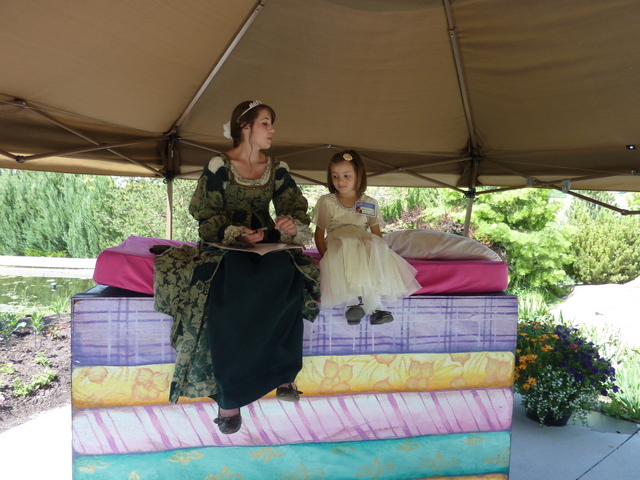 The festival also included the Frog Prince (a toy frog voiced by an actor hiding somewhere behind the scenes with a microphone) and the Twelve Dancing Princesses (who performed in an underground grotto which did not photograph well), Snow White, Rapunzel, The Little Mermaid, Sleeping Beauty, and many more.  I, however, was rather partial to the pumpkin coach.  It’s a sweet, sweet ride.  Especially if you can bake it into a pie afterwards. 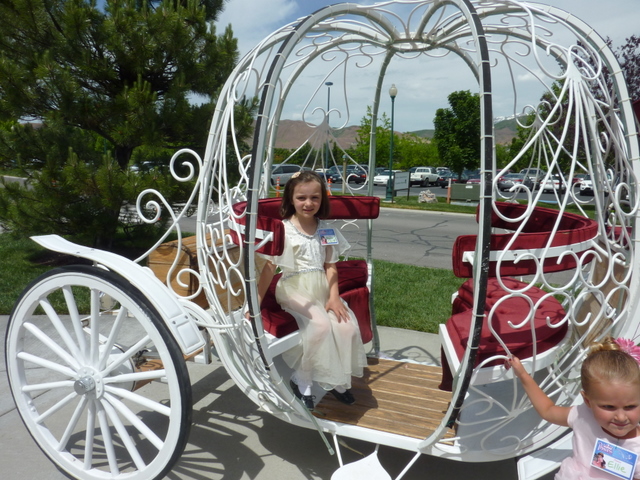 But perhaps Katie had the best idea for enjoying the festival.  Ain’t she sweet? 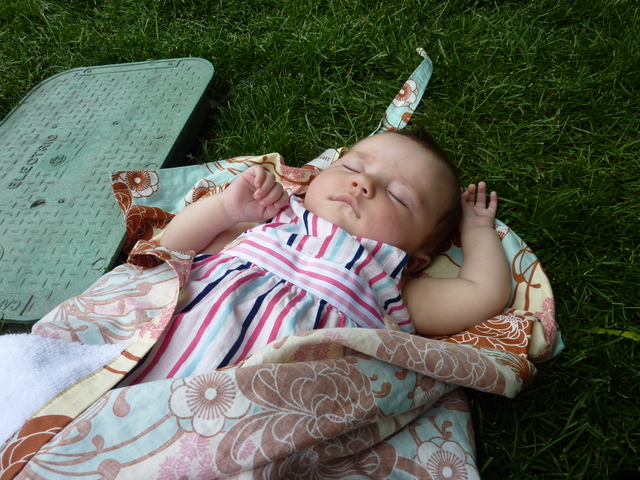 One thought on “More Brocade Than You Can Possibly Imagine”