OH, HOW WRONG YOU ARE!

In Provo, July 4th is at least a week.  A week.  Which is why we spent the first half of our holiday weekend there, taking in “Colonial Days.”  This is an exhibit sponsored by a local printing press museum.  There’s a Civil War encampment on the lawn, an exhibit about the Mayflower, some guy making lead bullets over a campfire, and ladies in 18th-century dress knitting doodads with acrylic yarn.

Brian and I agree that this mismash of time periods should lead the organizers to rename the event “Olde Tyme Days.”

Need I even say that Jeffrey was in hog heaven at Olde Tyme Days?  He insisted on coming in costume — the tricorner hat was a Christmas present from Uncle Michael and Aunt Natalie — and once Eleanor and William got wind of this, they insisted on costumes, too.  That’s why, in the picture above, she’s wearing a pioneer dress two sizes too big, and why William is sporting a leather vest (Grandma came to the rescue with those.  Whew!).

Oh, and Katie was dressed as Napoleon:

As interesting as the various exhibits were (one was a big collection of famous peoples’ autographs, including letters from Mark Twain and Helen Keller), my favorite part of Olde Tyme Days was this expression: 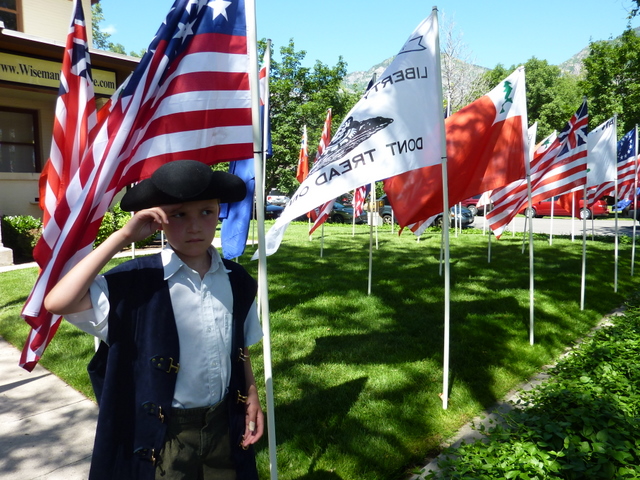 We call this Jeffrey’s History Face.  He wears it whenever he’s learning about the past. 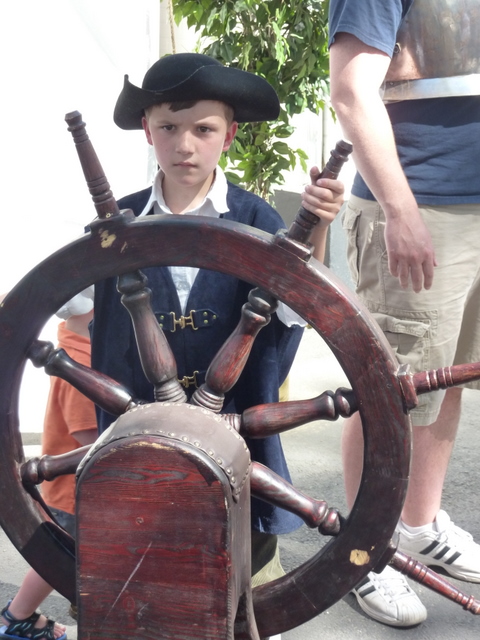 Even kicking back in an Olde Tyme chair is no reason to let down your History Face: 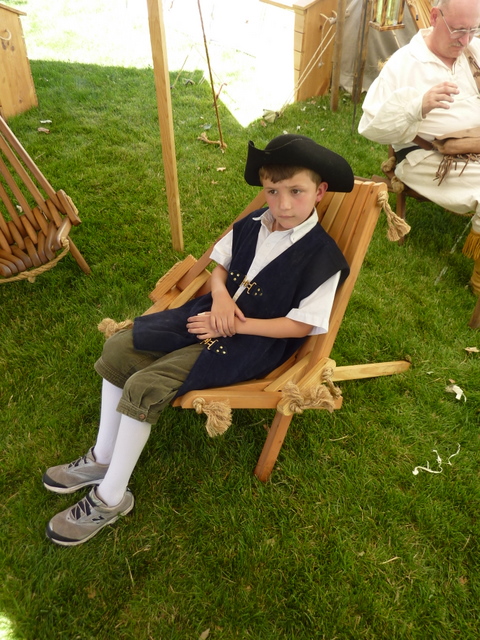 Eleanor, meanwhile, was given this little cornhusk doll:

And William got a snow cone.  A slushy, slushy, snow cone:

A SNOW CONE IS NO REASON TO LET DOWN YOUR HISTORY FACE!

After Ye Olde Tyme Days, the kids got to visit our friend DeLynn and visit her horses and donkeys of various sizes.  Jeff made the mistake of walking into the stableyard with a bucket of oats.  DONKEY MOB!

I stayed at home and made a blueberry pie.  And then spent the subsequent hours chasing Jeffrey away from the pie.

This was probably not necessary, since the pie, while pretty, was not my best culinary success.  I don’t think the recipe included enough cornstarch in the filling.  It was more like “blueberry soup pie.”  But dinner also included a lovely spice-rubbed pork tenderloin.  It pretty much made up for soup pie.

After dinner we headed to a hillside in my in-law’s neighborhood to watch the firework display over BYU’s stadium.  (On July 2nd!  See?  I told you it was a week long thing!).  Eleanor, who is usually skittish with fireworks, was relieved to be so far away.

“Not too loud, not to soft — these fireworks are just right,” she explained before the display.

She ended up running to my lap for comfort anyway.