I like the fact that July in Utah is bookended with two patriotic-ish holidays: Independence Day, and then Pioneer Day three weeks later.  I don’t know of any other state that celebrates its founding this way.  (Although I’ve only lived in seven different states, so who knows?)

Brian and I don’t do much for the holiday.  In fact, our only main observance of the holiday —

Okay, other than getting stuck with playing the difficult “pioneer” themed hymns in church for the third year in a row.  Take my word for it, “For the Strength of the Hills” takes all the strength in your fingers.  And don’t even get me started on “Carry On.”  You can stick that song in your handcart and haul it off.

ANYWAY our only main observance of the holiday this year was going down to the South Towne Expo Center to see a preview of all the floats that will be in the Days of ’47 Parade tomorrow morning.  It’s really quite fun, because who can resist . . .

. . . Seagulls and crickets working together to run a Book of Mormon printing press!  (I love that the books roll off the press with the covers on and everything.)

A squadron of eggs hang gliding over the Jordan River Temple!  (Apparently South Jordan is known historically for egg farms.) 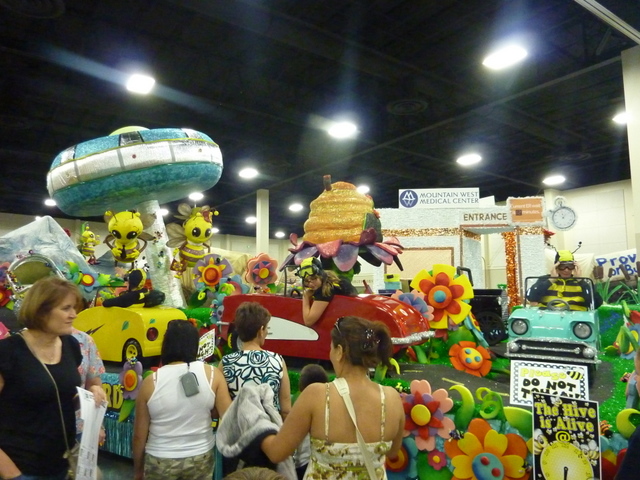 As you can see, the Oddity Meter expressed very high levels of Odd.  I love it, especially the float devoted to the Murray City Library, which is where I had my first reference job: 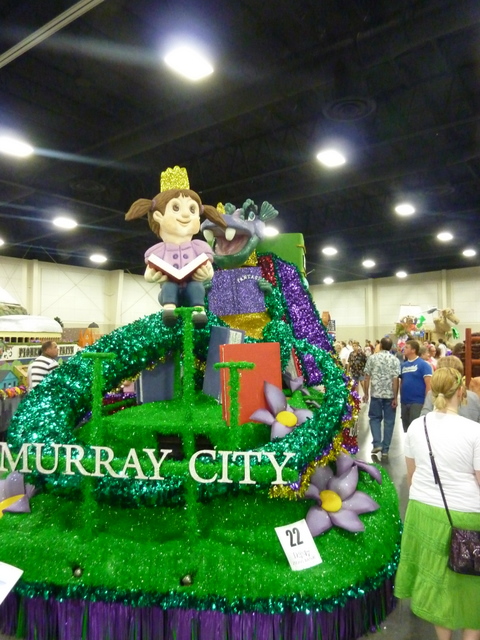 The library’s mascot is a dragon.  The Chinese Cultural Association also had a dragon on their float — one that sprayed water.  Cool, right?

Unfortunately, it was also sponsored by the “WTF Foundation.”

The float below celebrates “Wilford Woodruff: First Fly Fisherman in the West.”  Oh, really?  Well, you learn something new every day.  I will say that this float had the best sculptures.

We did have some personal favorites.  William adored this train float, which was from the Youth Parade held last week:

And Brian and I both voted for this float, celebrating religious diversity in Salt Lake.  It has tiny models of all these churches in the city, including the LDS Tabernacle and the Cathedral of the Madeline.  Way impressive.

The tiny houses were decorated with little flowering vines, and some even had bitty wreaths on the doors.  Wow.

In fact, the only bad thing about the parade preview is that there were clowns giving away balloon animals, and Eleanor reallllllly wanted one, but we had to say no because our kids have a tendency to put balloons in their mouths.  Thus began the Grand Commencement of the Whining.  Eleanor whined for a balloon all through the expo center, during the walk to the car, the entire drive home on the freeway, and continued to do so even as we dragged her into bed.

Well, if nothing else, you gotta be impressed by her persistence.  That’s the pioneer spirit, baby.