Know what?  I’m a wimp.  A camping wimp.  For me, camping means sleeping in a tent no more than 20 feet away from my car, sleeping on an air mattress, and munching on fresh fruit, cheese and veggies from a cooler.  What’s not to love?

Brian and I decided we would try to squeeze a camping trip in at the end of summer, and booked a night’s stay at the Tanner’s Flat campground up Little Cottonwood Canyon. 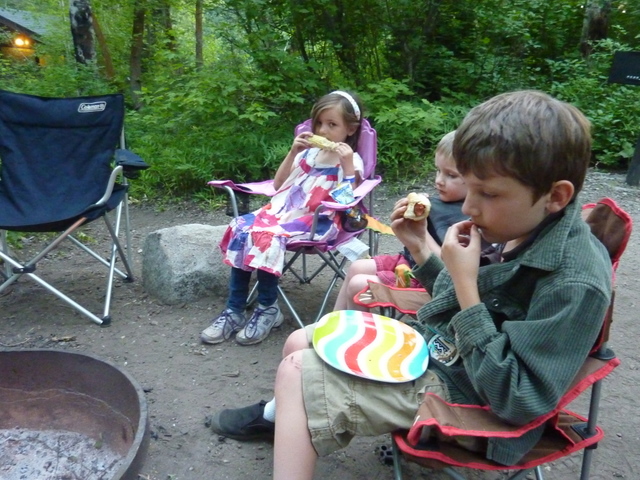 We really haven’t been tent camping with the kids in over a year, so it was almost a brand-new experience for them.  They loved goofing off in the tent and making as many trips as possible to the campground bathroom, which was just downhill from us.  (When making campsite reservations, I always go for the one nearest the bathroom.)

Eleanor was thrilled to spend time gathering kindling for the campfire.  She lead William on several expeditions, a la Little House in the Big Woods.  Adorable.

Jeffrey’s main occupation was throwing multiple marshmallows into the fire while shouting “TEMPLE OF DOOOOM!” and then watching them spontaneously combust.

I was really worried Katie would not sleep well, but she was great, and slept in quite a bit.  Jeffrey, on the other hand, woke up at 6:00 and proceeded to bounce on the air mattresses as much as possible.

Ugh.  We decided we might as well get up and go hiking.

The Albion Basin is at the top of Little Cottonwood, and is very, very popular for hiking, due mainly to the scads of wildflowers:

Go ahead, sing it to yourself: The hiiiiills are aliiiiiiive with the sound of muuuuusiiiiic . . .

It’s so busy that on most weekends you have to park at the bottom of the basin and take a lousy shuttle bus up to the trailhead.  But we were on the road early enough to bypass this inconvenience and park where we wanted!  Right at the trailhead for Cecret Lake: 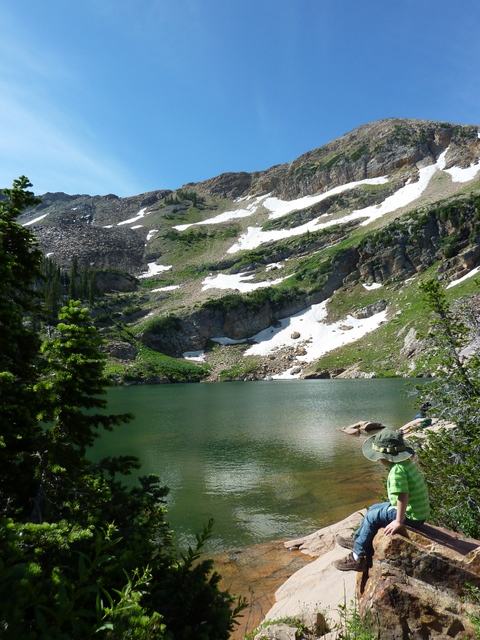 Oooooo, purdy purdy.  Last year, we did this hike, and it was just as pretty, but we got rained on, then hailed on.  And then we saw some moose.  This time, we were nearly alone during the first part of the hike, and saw lots of hummingbirds in this meadow:

Downtime on the trail was spent waiting for Heidi to pop out from behind a boulder with a goat or something.

And . . . then we realized that our main activity for the day was over by 11:00 a.m.  So we went back to the campsite, ate lunch, built a fire, roasted yet more marshmallows (yes, more TEMPLE OF DOOOOOM!), and packed up for home.

Need I say that sitting in full sunshine in August next to a campfire is a dumb idea?  Naps were in due order that afternoon . . .

One thought on “Camping at Tanner’s Flat”