My youngest sibling, Alex, got his Eagle Scout Award last week.  This was a very big deal for my parents, and they all requested that we come to his Court of Honor.  (And a two of my cousins, Kim and Erin, were there too!  I haven’t seen them in a few years, and it was great to coo over their babies.)

For Jeffrey, it was two of his loves combined: he loves being a Cub Scout, and he absolutely worships his Uncle Alex.

I made sure to spiff up Jeff’s Scout shirt for the occasion, collecting all the little beads and neckerchief slides and sewing on those impossible arrow points.  (Who invented those dumb arrows?  Not anyone who knows how to sew, surely.) 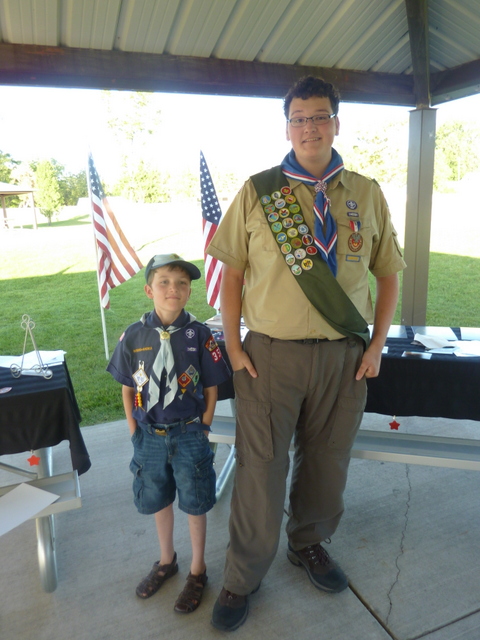 My dad was able to represent the Scout Council and give Alex his award.  (Isn’t his hat awesome?  Brian and I both come from big Scouting families).

Alex’s Eagle Scout Project was building this enormous concrete fire pit in the city park behind my parents’ house.  To celebrate the end of the event, everyone had fun torching marshmallows to death in the new pit.  There were benches and everything — an impressive project.

Alex gave his Mentor award to my mom (who, to tell the truth, did a lot of work to get this project done).  D’awwww!

And now Alex gets to go off to the Blair Atholl Jamborette — an international Boy Scout event in Scotland.  And he gets to wear a kilt!  AND I NEED PHOTO EVIDENCE OF THIS, DO YOU HEAR ME, ALEX?

2 thoughts on “SHRIEEEEEK! (That’s supposed to be an Eagle Sound)”