We officially celebrated William’s eighth birthday a week after his birthday. It’s a good thing, too, because if we had celebrated on the day proper, it would have been in the middle of a shivery rainstorm. Since our plans for his party involved lots of outside water play, this was a great thing.

Eleanor was put in charge of the games. She found an article in American Girl magazine with a list of different water games to play, and was excited to gather all the materials and be in charge of all the activities. Many, many water balloons were exploded in the service of this cause.

Jeffrey was put in charge of setting the table. For fun, he took the extra cups and built decorative pyramids with them. 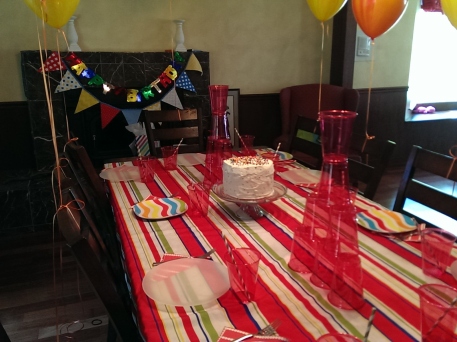 My job was to make the cake. Since the internets are all twitterpated with the reissue of “rainbow chip” Betty Crocker frosting (trust me, this is a thing), I decided to buy a bag of rainbow chips and make my own. I then mixed rainbow sprinkles into cake batter for a homemade “funfetti” cake.

It was . . . sweet. Very sweet. So sweet, in fact, that I gave the leftovers away. The kids loved it, though.

William had a blast at his eighth birthday party. He is such a loving kid, “sweet to the core,” as a friend of mine described him once. I’m so lucky to be his mom!