With all the good weather this week, we decided to continue our All-Star Playground Tour this week.

Tuesday was spent making a return trip to the Beacon Hill Playground, with its amazing built-into-the-hill slides, super-long zip lines, and splash pad.

It was so much fun that I completely forgot to take any pictures. Alas, such is life.

On Wednesday we found the only playground left in the city that still has its original 1970s playground equipment.

Awwww, yissssss, this was a great place to play. I thought the kids would like the 20 ft. high swings the best (tallest swings in the city!) but it was this that really caught the kids’ eye:

A big, super-fast old-school merry-go-round. With the bumpy metal and everything!

I pushed the kids around a few too many times. Not only did Jeff get motion sick and have to sit face-down for the rest of the trip, but I twisted my back a bit and had to resort to an ice pack when we got home. (Not to mention feeling nauseous myself just watching them go round and round. Ergh.)

There was also a metal slide. Burn the skin off your thighs, children!!

On the way home, we stopped to visit the smallest swings in the city:

It’s in a tiny “parklet” outside of Molly Moon’s Ice Cream. Don’t be fooled — Katie still managed to tip herself backwards on the tiny swings. She lost her ice cream (sad!) but the good fellows at Molly Moon’s gave her another one, free of charge. Nice!

Speaking of sadness, we faced quite a bit of it on Thursday. We made one last trip to the adventure playground to check on our fort. The last time we saw it, it looked like this: 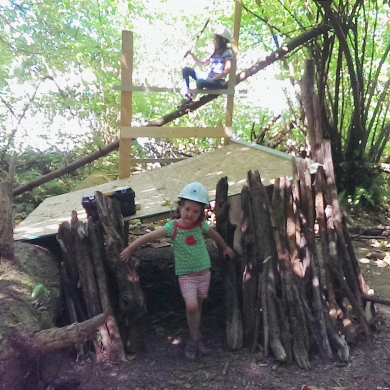 But when we arrived, all we saw was this:

Every last scrap of the fort had been torn down and dragged away. This is specifically against park rules; you are told whenever you visit that you aren’t allowed to tear down other kids’ forts. It’s really weird that everything was gone, even the stuff that we had nailed into trees. Eleanor got pretty upset by it all.

But we rebuilt the lookout ladder, and it made her feel a little better. 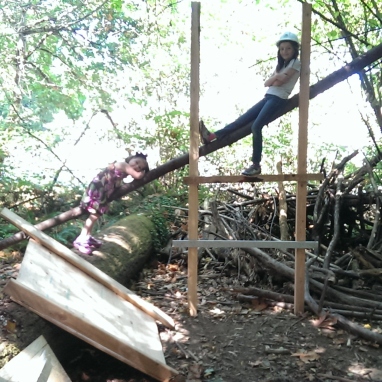 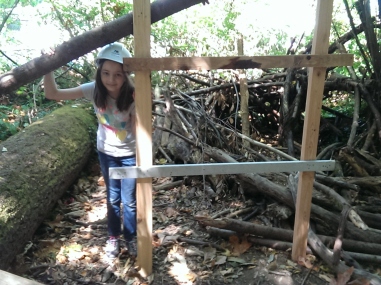 We spent the remainder of our time playing in all the other forts. Since it’s late in the summer, there were some fairly complex forts around. Jeff immediately began collaborating with a group of other boys and helped build a bridge and . . . possibly some sort of slide? It was difficult to tell.

We’ll have to use these pictures as inspiration for next year!

We also spent a little time at the end exploring the beloved “dragon slide” nearby: