The big event for our Yellowstone trip was something Brian, Jeffrey, and I had been planning for months: a 10+ mile hike. It’s one of the requirements for the Boy Scout Hiking badge. Since my parents were accompanying us to the park, they offered to take the younger kids and shuttle our car from one trailhead to another.

This opened up a ton of hiking possibilities in the park. When Brian mentioned it to the park rangers in the Backcountry Hiking office, their eyes lit up with excitement. Of course, the hike we chose was dependent on factors out of our control; any untoward bear behavior could result in a trail being closed to hikers by the rangers. So after choosing a Top Three or so, we were able to pick a good 13.5 mile stretch through the Black Canyon of the Yellowstone.

This is a river canyon that winds along the northern border of the park. It took us good 2 hours just to drive there from West Yellowstone, so Brian, Jeff, and I left at 6:00 a.m. Dawn was just breaking when we started up the trail.

We hadn’t gone long before we heard a series of howls off in the distance. Several animals howling at once — was it wolves, or coyotes? Initially, the howls were faint, but they grew louder and then suddenly burst into a series of barks and bays. Wow, I thought, some elk just met its maker.

There’s no way of proving it one way or the other, but we’d like to assume that it was wolves we heard howling that morning.

I admit that the first section of this hike was my favorite. This plateau was stunning; the grasses running up and over the hillsides look velvety and untouched. As the trail began to turn towards the black-colored mountains that form the canyon, Jeff spontaneously burst into song, belting out “America the Beautiful” for all the bison to hear.

He also kept singing “Home on the Range.” We had also tied a bear bell to his belt, and later wondered why we had bothered. Jeff IS a bear bell.

This suspension bridge marked the “official” entrance to the canyon. 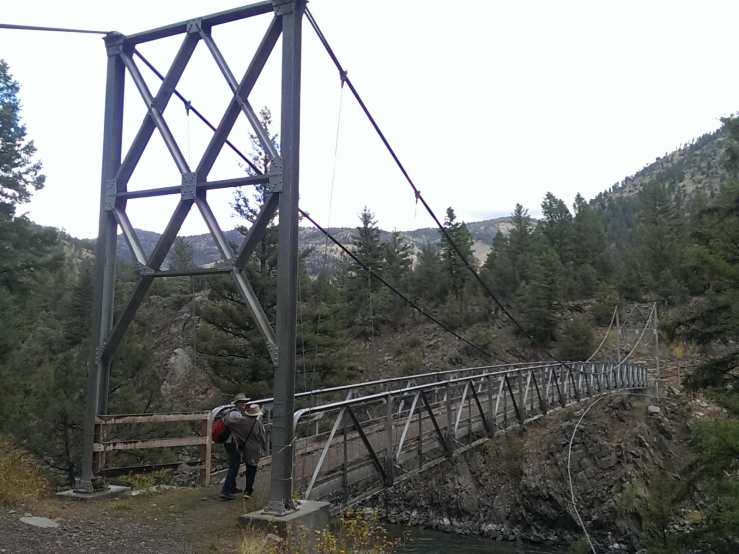 So far, we had only seen two other hikers on the trail: a pair of backpackers who had just woken up from spending the night on the riverside. We only saw about 20 people total through the day, which is considered pretty sparse by Yellowstone-in-the-summer standards.

Soon we were hiking just a stone’s throw away from the Yellowstone River. There were numerous elk bones and antlers along the way. The farther we walked, the . . . ah, fresher the bones appeared.

A rainstorm prompted our lunch break under a big pine tree. We thought it was the perfect place to stop and munch while waiting out the storm. We didn’t find out until afterwards that a very fresh (yet picked-clean) elk carcass was just nearby. Since bear like to stick around carcasses, we got ourselves out of there fast. (On the other hand, we had a Human Bear Bell with us, so we probably had little cause for concern).

The second half of the hike was where my body began to protest. I managed to stub both of my big toes quite badly on boulders, and then the hip flexer muscle on my left leg began to get sore. But onwards we climbed! 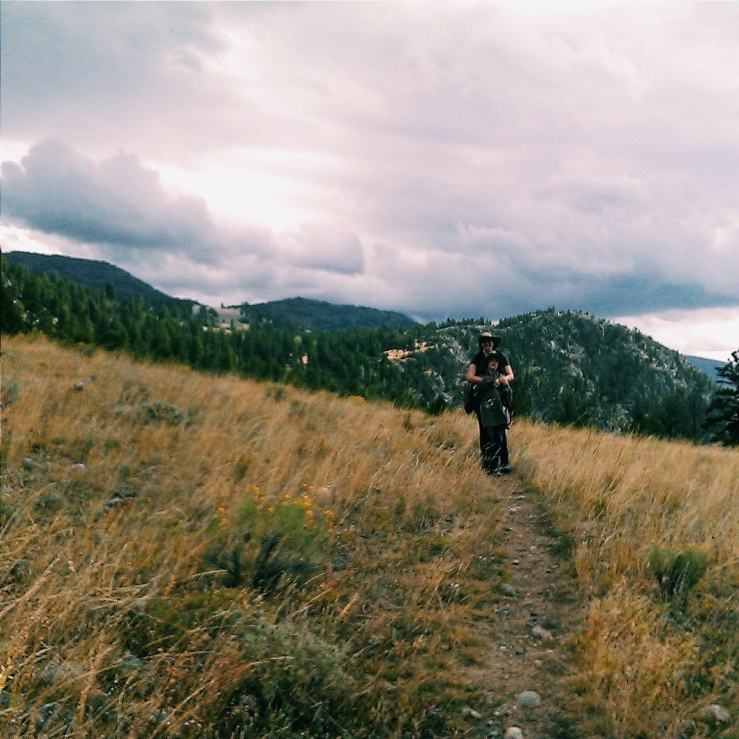 Jeff found this cool tree that had grown up and around an elk antler. The antler stuck out on either side of the trunk.

And my hip flexer began to protest quite a bit more. Still we climbed!

We came to this meadow that was occupied by a bison, so we climbed up and over a hill to avoid him. My hip flexer whined a bit sharply.

We walked through a stunning plain of chest-high golden grasses. As we pushed through, a herd of bison noticed our approach and began to run up a hillside to get away. Don’t worry, they were well beyond the  25 yards required for safe bison viewing. But still, I kinda felt like I should have had a bonnet and handcart for a moment.

Around Mile 10, we came to a creek that we needed to ford. I pulled off my shoes, and found out that my stubbed toes were in far worse shape than I thought. Three toes were blue, and the toenails on both big toes were cracked clear across. A blood blister was forming at the base of the left toenail. Ow!

Needless to say, it felt soooooo goooood to dip my feet in a cold stream for a while. The water shoes we packed were totally worth the investment.

Many pats on the back for completing the crossing without anybody falling in. And now:

This is where my hip flexer gave up the ghost. At this point it was extremely painful to put any weight on my left leg. I was doing a zombie step-drag the entire rest of the way.

Soon we came to the suspension bridge signifying the exit from the canyon. It had a lovely view of the river churning below, but I admit the bouncy-bounciness caused me to freak out about the height a bit. Brian teased me that it was the only part of the hike I was in a hurry to finish. 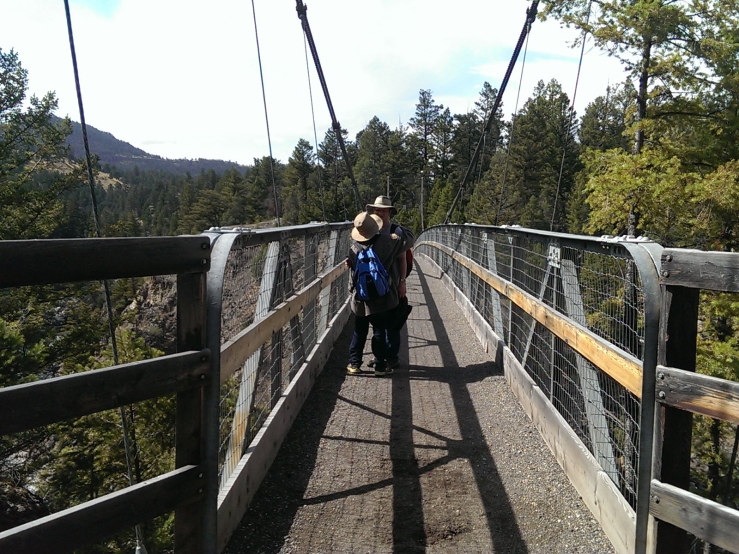 We began to see more families with young children or groups of senior citizens, doing in-and-out mini hikes, so we knew we were approaching the end. Brian and I felt like they were the seabirds sailors see when coming near land. (Unlike the backpackers, these daytrippers were appropriately impressed when we told them we had started at the Blacktail trailhead. It felt good.)

Alas, the last 1.5 miles was all switchbacks. Steep, straight-up punishing switchbacks. It was pretty miserable, which is too bad since it was still consistently gorgeous.

Brian, who was feeling fine, marched on ahead to see if the car had been shuttled over to the trailhead. Then he came back and took Jeff’s backpack. Jeff, who had been only slightly faster than I, perked up over the removal of his pack and sprinted up the remaining switchbacks!

Sprinted! Oh, to be twelve again.

I’ve never been so happy to see a car. When we met up with my family in Canyon Village, the three of us insisted we stop and eat right then and there. I don’t think we packed enough calories for the hike. (Only ~800 calories per person, for a hike that burned ~3500. Not smart.)

I also was not able to walk properly on my left leg for about a week. Even when we returned home to Seattle, I had to climb stairs with only my right leg. But still. Totally worth it. I love this park.

One thought on “Up & Down the Black Canyon”