It’s that time of year again — in which I list my favorite books for young readers (aged 0-18) from the previous publishing year. Note: this is a list of personal favorites, not Best Books or even Books Libraries Should Consider Purchasing. Just a few titles that tickled my fancy.

My tastes (like a lot of librarians) are very wide-ranging. Not every book on this list is for you. (I once had a friend whose favorite book is Cormac McCarthy’s The Road glance over one of my previous lists and pick out a super-fluffy novelization of “Twelve Dancing Princesses” to read. She didn’t like it. Surprise, surprise.)

Not all of these books are age-appropriate for all kids. Books with themes and content for the 12+ crowd are labeled with a double asterisk (**). Grown-ups, please read them yourself first before handing them over to a young person.

Most Beautiful Picture Book of the Year: The Moon is Going to Addy’s House by Ida Perle

The Book So Nice I Listed It Twice: Hoot Owl, Master of Disguise by Sean Taylor, illus. Jean Jullien. Heh — I mistakenly thought this was a book published in 2014, and so put it on last year’s list. Still one of my favorite read-alouds

For Everybody Who Ever Wanted to Hug a Giant Person Made of Pillows: Lenny & Lucy by Phillip C. Stead, illus. Erin E. Stead

Best Demonstration on the Art of Persuasive Speech: One Word from Sophia by Jim Averbeck, illus. Yasmeen Ismali

THE CHARACTERS IN THIS BOOK EAT TEN KINDS OF PIE: The Tea Party in the Woods by Akiko Miyakoshi

I Usually Don’t Like Books About A Character Who is “Different”  But Then Later Accepted, But This One Really Resonated With Me: Red: A Crayon’s Story by Michael Hall (Parenting a kid on the autism-spectrum will do these things to you)

In Which I Exhibit My Love for Stories With Little Wee Gnomes and Things: The Little Gardener by Emily Hughes

The Book that Pinterest Loves: Home by Carson Ellis 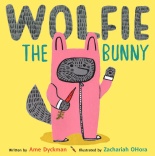 Best New Sibling Story (in which Big Sister has legitimate reasons to fear that Baby Brother will eat her): Wolfie the Bunny by Amy Dickman, illus. Zachariah OHora

The Best Children’s Book That Made Me Bawl All Over My Kitchen: The War That Saved My Life by Kimberly Brubaker Bradley  (There are lots of children’s books about overcoming trauma. This is one of the best-written in a long, long time.)

Book With The Most Crossover Appeal for Adults: The Hired Girl by Laura Amy Schlitz (did you grow up loving books like Anne of Green Gables or Little Women? READ THIS ONE YOU MUST).

The Book That My Kids Keep Requesting Me to Read Aloud: Fearsome Creatures of the Lumberwoods by Hal Johnson (This book reads like someone thew Scary Stories to Tell in the Dark in a blender with John Hodgman’s The Areas of My Expertise. Bizarrely hilarious and creepy in turns.)

Best Fairytale Novelization (My Favorite Sub-Sub-Genre): The Cottage in the Woods by Katherine Coville (a retelling of “The Three Bears” in the voice of a Victorian-era governess! Who is also an enchanted bear!!!)

Best Conclusion to a Series, Part One: Gone Crazy in Alabama by Rita Williams-Garcia (Featuring: eccentric grandma who gives lectures with a tambourine! Gosh, I love these characters.)

Best Conclusion to a Series, Part Two: Princess Academy: The Forgotten Sisters by Shannon Hale (Featuring: girls who wrestle alligators in a swamp! And then climb on the roof and yell “FRESH MEAT!” to all the neighbors!)

This Had BETTER NOT BE the Conclusion to This Series, DO YOU HEAR ME, JEANNE BIRDSALL? The Penderwicks in Spring by Jeanne Birdsall (THE NEXT BOOK SHOULD TAKE PLACE TEN YEARS LATER AND BATTY AND JEFFREY NEED TO GET TOGETHER. DROP ME A LINE IF YOU HAVE ANY QUESTIONS.)

Best Story About a Part of the World I’m Betting You Know Nothing About: Tiger Boy by Mitali Perkins (The Sundarbans. Yeah, I had to look it up, too, it’s okay.)

Dude, I Want to Have a Dragon Friend Whilst Living in a Mansion in San Francisco! The Dragon’s Guide to the Care and Feeding of Humans by Laurence Yep and Joanne Ryder (they drink tea! In a secret room in the basement! Swoon.)

This Book Has Appeal for Girls and Boys, but The Cover Design is Unfortunate: Buckle & Squash: The Perilous Princess Plot by Sarah Courtald (I’m actually kind of ticked, since this book is hilarious and lots of boys would like it if they give it a shot)

**Required Reading for Middle School Kids (and their parents): Goodbye Stranger by Rebecca Stead (One of the best depictions of middle school social dynamics, ever. Ever.)

**GARY SCHMIDT IS A GENIUS JERK WHOSE NOVEL MADE ME SOB ALL OVER THE LIVING ROOM: Orbiting Jupiter by Gary D. Schmidt (I’d tell you more but then my computer would short-circuit from the BUCKETS of tears OH GARY SCHMIDT, YOU JERK!)

**Best Mystery for the “Veronica Mars” and “Sherlock” crowd: Trouble is a Friend of Mine by Stephanie Tromly (Is also hilarious. The sequence where all the characters crash through the ceiling of a creepy dentist’s office is the BEST)

**Best Historical Fantasy: Walk on Earth a Stranger by Rae Carson (A crackerjack tale of Gold-Rush era pioneers, with a great supernatural twist; I can’t wait to read the sequel!)

**I Was Completely Sick and Tired of YA Dystopian Novels, but HOLY SMOKES this Book Was Worth Diving In Once Again: The Scorpion Rules by Erin Bow (Featuring: the best amoral world-ruling AI ever!)

**Best Bildungsroman: The Tight Rope Walkers by David Almond (Also a Best Book With Crossover Adult Appeal) (Also David Almond is a jerk who made me cry all over a hotel room)

**Best Retelling of a Greek Myth: A Song for Ella Grey ALSO by David Almond (it’s not often that one author gets two books on my list. But whoo — this modern retelling of “Orpheus & Eurydice” is incredible)

OMIGOSH A Graphic Novel About a Girl Who Does Roller Derby SQUEEEE! Roller Girl by Victoria Jamieson

Best Graphic Novel With Dancing Skeletons. Because It’s a Category If I Say So: Human Body Theater by Maris Wicks

**Best YA Fantasy: Nimona by Noelle Stevenson (Yep. And I’ll Arm Wrestle Those Who Say Diff’rent!)

**One of the Most Important Books You Can Read This Year: Drowned City: Hurricane Katrina and New Orleans by Don Brown

Probably the Best Kids’ Nonfiction of the Year: Most Dangerous: Daniel Ellsberg and the Secret History of the Vietnam War (Fun fact: the Pentagon Papers were 50,000 pages long. And Ellsberg Xeroxed it. And then MAILED IT TO PEOPLE.)

What Did You Do After School When You Were 13? Did it Involve Sabotaging Nazi Equipment? No? Well, It Did For These Kids: The Boys Who Challenged Hitler: Knud Pedersen and the Churchill Club by Philip Hoose

A Story That Makes Me Proud to Be Human: One Plastic Bag: Isatou Ceesay and the Recycling Women of the Gambia by Miranda Paul, illus. Elizabeth Hunan

In Which Ben Franklin Uses the Scientific Method and all STEM Breaks Loose: Mesmerized: How Ben Franklin Solved a Mystery that Baffled All of France by Mara Rockliff, illus. Iacopo Bruno

Paintings of Sea Creatures So Exquisite They Belong on a Cathedral Ceiling Somewhere: The Most Amazing Creature in the Sea by Brenda Z. Guiberson, illus. Gennady Spirin

There Were TWO Highly Acclaimed Books About Typhoid Mary Published This Year. This is the One I Read: Terrible Typhoid Mary by Susan Campbell Bartoletti (see also the one I didn’t read: Fatal Fever by Gail Jarrow)

Best Con Artist Story: Tricky Vic: The Impossibly True Story of the Man Who Sold the Eiffel Tower by Greg Pizzoli (he actually sold it TWICE!)

In Which Harriet Tubman Packs Heat: The Underground Abductor by Nathan Hale