It’s one of my goals every summer to try and get my children outdoors as much as possible.

Even if I don’t always get the chance to do the same myself. But I think I may have gone a little overboard with my goal this week.

Sure there was some indoors time, such as the construction of this Space Pod kit which Brian and I gave to Wimmy for his birthday. The boys initially wanted the grown-ups to help, but we pointed out that the instructions said it was either for one adult and one child aged 6+, OR two children aged 9+. William was thrilled that he could finally count himself in the 9+ category, and set to work.

Nice, right? It’s the preferred place to read books right now. This afternoon, the boys grabbed all the pieces of the Snap Circuits sets and “installed electronic space equipment” in the Pod.

BUT — despite that inside stuff — it was all about the Outdoors this week.

The biggest contributor to this was the 2nd half of Summer in the Woods. Every morning I’d drop Wim, Ella & Jeff off in Yost Park forest, and they would spend six hours learning about nature, whittling spears, making cordage, hiking and playing games. They were under the care of camp counselors that have names like Hawkeye and Little Bear and were barefoot every single day of camp.

I didn’t take any pictures of them at pick-up (I regret that now), but they were often covered with glorious scratches, mud streaks on arms and legs, and slumping with exhaustion. We’d often swing by Dairy Queen for ice cream cones (I tried to resist doing this every day, but I’m a pushover and the kids know it), then spend the afternoon quietly collapsing with books.

My time in the Great Indoors during Summer in the Woods was spent dealing with Fruitstorm II: the Reckoning: 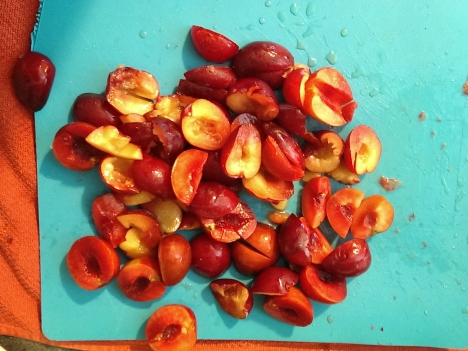 Yeah, plums and blueberries. I’m started to get really tired of making jam.

Eleanor had to miss the last three days of Summer in the Woods because of this: 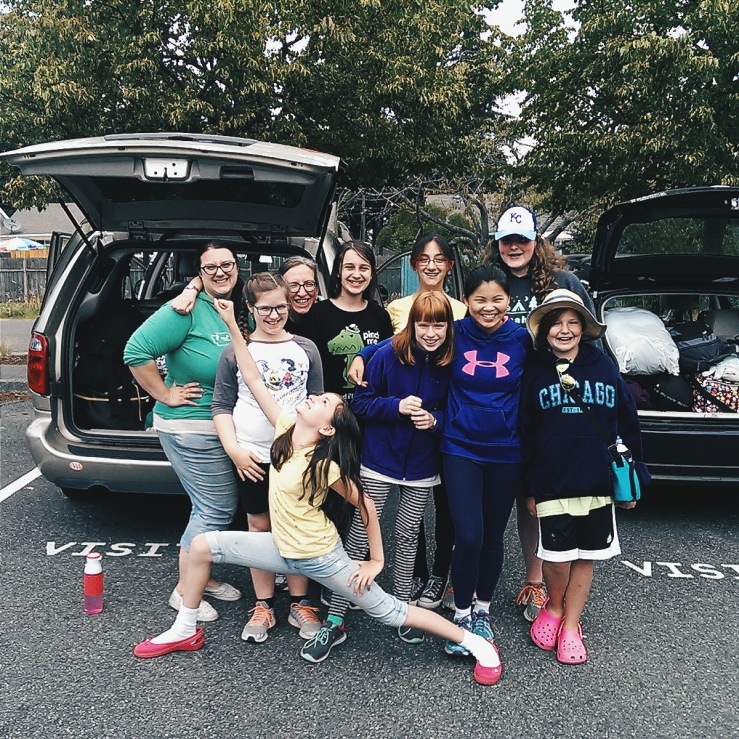 Her troop spent two nights at Camp St. Alban’s, from Wednesday to Friday. I was recruited to carpool five of the girls down to the camp.

Which . . . went less smoothly than I anticipated. My cell phone died about 3/4ths of the way there, so I lost my GPS directions. The printed map from the camp was unclear, so I missed a cruicial turn and ended up driving the Key Peninsula Highway for an extra 45 minutes.

Did you know that the Key Peninsula Highway dead-ends at a cul-de-sac? I do! Guess how I found out?

I will say that the girls in Eleanor’s troop are an absolute delight to spend time with. They spend their time singing camp songs and chattering about other music (“Have you heard of this song called ‘American Pie’? It’s like the best song ever” and then they all sang the chorus together and it was adorable!) and geek culture (Monty Python quotes, lengthy debate about how spells in Harry Potter effect one’s physiology) and what they want to be when they grow up (one girl wants to be a large-mammal vet and spent time identifying all the horse breeds we passed on the road; another wants to be a cultural anthropologist and “solve the mysteries of the ancients”).

The drive home was not nearly as fun. Podcasts are entertaining but just aren’t as fun as twelve-year-old girls. (5 hours driving in total. Ugh. And oh yes, I still had to carpool William to skating class right after I arrived home.)

AND THEN . . . after multiple days spent in the outdoors, I had the NERVE to take the family hiking this past Saturday.

Such a thing could not be borne by . . . certain unnamed persons in the family.

Said persons voiced their opinions mutiple times and then sulked on a pile of tree roots.

But Wallace Falls was otherwise a delightful hike. About 4.75 miles roundtrip, with a stunning trio of waterfalls at the end. The trail continued another 4 miles or so, but we declined to do that.

I love this sign the park put up as you begin the main part of the trail. I love the North Cascades, I love these forests!