Our school year doesn’t begin until after Labor Day, so we decided to cross our fingers for good weather and arranged to rent a cottage in the Hoh River Valley for the weekend.

We’d stayed in the same little house before, two years ago. But that trip was in October, and it rained almost the entire time. This trip was a lovely, sunny time without a drop of rain.

Our main task was to view different parts of Olympic National Park. This is always a tricky task. The park is centered around the Olympic Mountains, which is beautiful but impassable by car. So, you have to drive quite a bit around the outside of the range to reach all the different features of the park.

The first stop after our ferry crossing was Lake Crescent, at the northern end of the park. This is one of the most beautiful places in the entire state. The highway passes right along its edge, and in our previous trips I’d always pressed my nose against the car window as we sped past, wishing we could stop. But this time, we could!

We headed straight for the Lake Crescent Lodge and rented some canoes so we could paddle around for an hour. The weather was warm, sunny, and perfect.

Brian had the girls, and I had the boys. The idea was that Jeff had more canoeing experience and could help me out, but it actually led to bouts of uncoordinated paddling. There were a few times when I ordered the boys to put their paddles up while I did all the navigation myself.

We warmed up afterwards in the Lake Crescent hotel. I love national park lodges, they are so charming. (The kids didn’t understand the concept of mounted elk heads on the wall.)

After our canoe time, we drove to a picnic area on the lakeshore. There weren’t any other tourists around, and it was incredibly peaceful. 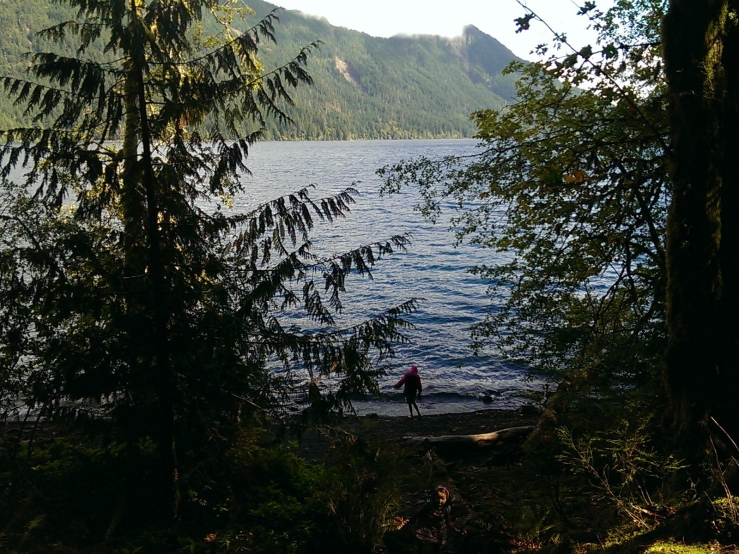 Having filled up, we headed back to the Storm King ranger station to do the little hike to Marymoor Falls. The kids grumbled at first, but they loved the payoff at the end.

It was late afternoon by the time we got back to our car, so we zipped off down the highway for the drive to Forks. (Yes, that Forks. There’s still plenty of vampire junk around town — although not nearly as much as there was in 2013 when we took our first visit to Forks — but enough to catch the kids’ attention. This lead to a lengthy car conversation about vampire lore, cheesy YA literature, and whether or not a vampire and a werewolf can have a baby).

After settling in and grabbing dinner at a diner in Forks, we decided to drive down to Kalaloch Beach for the evening ranger program. It was all about seeing stars in the park — both in the sky, and in tidepools (seastars). Katie was chosen to pretend to be the Pacific Ocean in an audience participation activity. She scurried up and down the aisles of the amphitheater, crying out “Make way for the water!”

The sunset at Kalaloch (which we viewed before the program) was incredible. The kids were itching to get their feet wet in the waves — and William went ahead and doused his pants.

The next morning it was very warm and sunny outside, so we all donned our swimsuits and headed to Rialto Beach. Our last beach day of the summer — and it was hot enough to require air conditioning in the car!

Well . . . remember that trip to Graylands Beach, and the crazy only-on-the-shore haze?

Rialto Beach was the setting of the little-known Gidget movie,  Return of the Haze: Don’t You Feel Underdressed?

It was a little disheartening to arrive in swimsuits and be greeted by a beach full of people wearing long pants and hoodies. We splashed in the waves anyway. It wasn’t that bad, to tell the truth — the water was warmer than Puget Sound — but the waves kept tossing up little pebbles that hit our shins and made them sting a bit. Eleanor was happy I joined her in the water, so it was worth it.

There were surfers catching the waves, so it wasn’t that ludicrous. Yeah. . . the surfers were wearing wetsuits, but still.

We returned to our cabin for warm clothes, warm lunch, and a few rounds of Magic: the Gathering before we drove into the mountains to see the Hoh Rainforest. The last time we visited this area of the park, the trail we wanted to take was blocked by a massive Roosevelt Elk, which was incredible. No such luck this time. But the Hall of Mosses was just as majestic without the elk, to tell the truth.

Our plan was to try to see another beach sunset, so we drove to Forks and bought a picnic supper of fried chicken, then drove down to Ruby Beach to eat.

Again, the chilly wind foiled our plans a bit. Brian and I were dismayed at the prospect of eating chicken with chattering teeth, until the children discovered a neat fort that someone had built out of driftwood. We all fit snugly inside, and there was a circle of logs to sit on, and a smooth stump in the middle that worked as a table. It was the best pirate hideout/picnic spot ever.

After our supper, the kids were eager to use the information they had learned at the ranger program the evening before and ran out to explore tidepools. 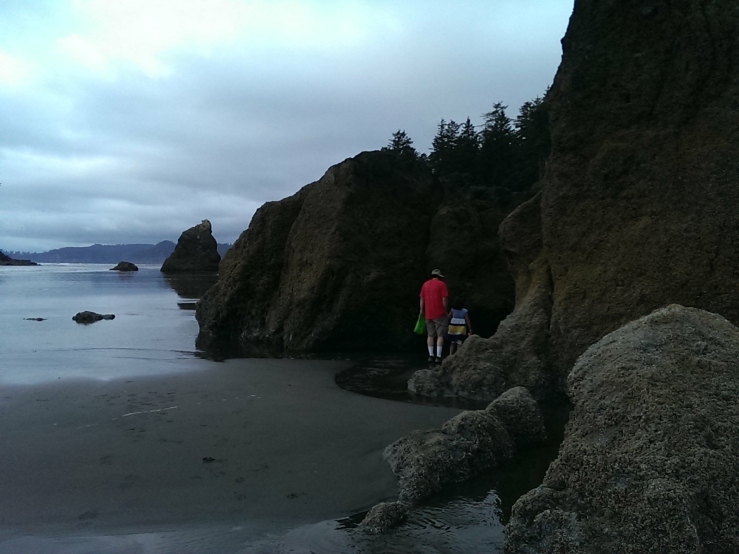 They learned that touching sea anemones is okay to do, but they will make your fingers sticky. We also got to hear barnacles click while bubbling under the waves.

Ruby Beach is one of the most iconic locations on the Washington coast. I love being there.

Our rental cottage sits on a few acres of rainforest, and the property owners have created their own network of private trails. Katie and I took a stroll during our final morning at the cottage. (We also got to try out the outdoor shower — the cottage relies on well water, which was a bit dry at the time of our visit. The owners installed an outdoor shower that uses purified rainwater. It was really fun to use — nice and hot!)

Anyway, the private trails — several of the larger stumps, trees, and logs have been given names like “Grandfather and Grandmother Stump” or “Gentle Giant.” This rainforest is deservedly famous — it’s so lush and lovely.

On the way home we stopped in one more part of the national park, a little trail called “Ancient Grove.” It’s a little loop that circles on a plateau above the Sol Duc river, and is so old it’s nearly haunted.

It was too short of a visit (although we were good and exhausted by the time we got home); the mountains/ocean/rainforest is such a stunning combination of landscapes! Hopefully the days will pass swiftly by until we get to travel there again.