It’s come to my attention lately that I only have about five or so years left with all my little ones living under my roof.

Therefore I’m more inclined to make a big deal out of holidays, vacations, etc. while I’m still in this happy place.

This year was no exception. How I love to spoil my little ones. How I love to cuddle them and eat good food and look at their new books and admire their fuzzy new pajamas.

Here are the stockings all filled up on Christmas Morning. I like to take a picture of what Santa has done before the kids have a chance to discover everything. 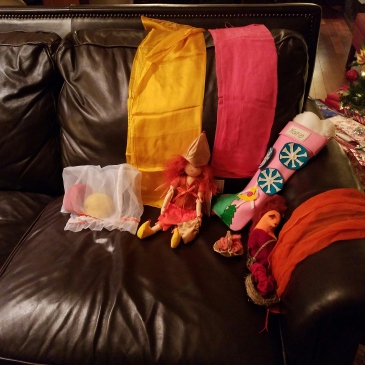 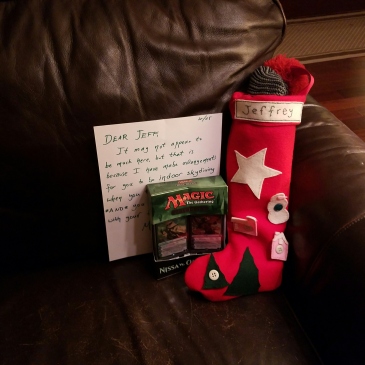 And then I also take a picture of this:

Yeah, those are tiny little snowmen. Jake was given a pair of “Holiday Specs” by his mom, and when you put them on they turn all bright pinpoints of light into little snowmen. You can even rock the glasses from side to side to make the snowmen dance!

The adults all thought this was absolutely wild. We squealed and passed them around, and even went outside to look at the radio tower light across the street. (Big red snowman!)

Jake got his camera out to capture the kids’ reactions to putting on the specs. But to everyone’s surprise, they didn’t think it was all that cool or surprising. They said something along the lines of “hey, neat” and that was it! Humph.

Here are Das Kinder on the stairs on Christmas morning:

And here they are discovering their stockings. Katie put her hands over her mouth and gasped-squealed when she saw that Santa had, indeed, brought the Orange Fairy. (Only one more fairy in the collection to go!) 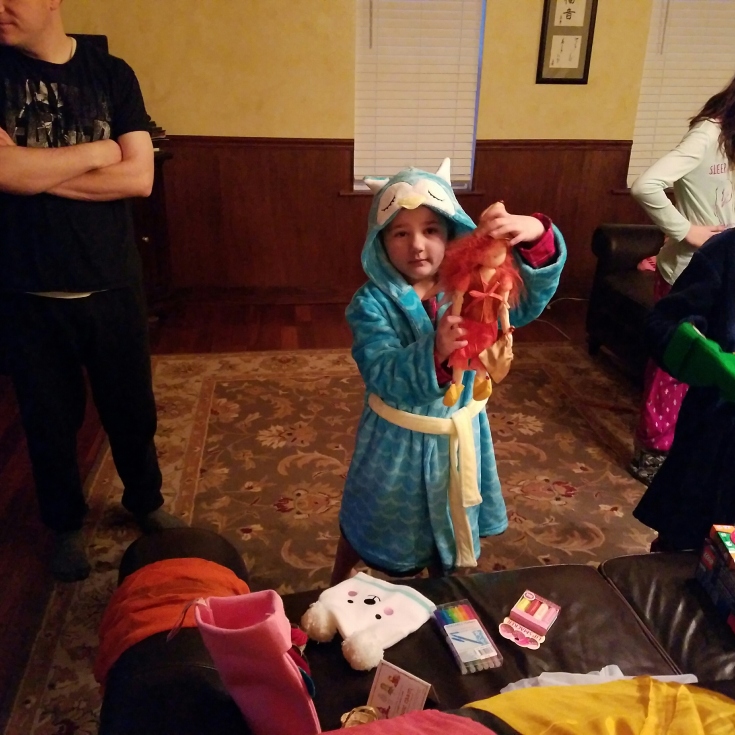 After stockings and a quick breakfast of Danish kringle, we swept ourselves off to church. Jake and Erica came along with us, which was great because both Brian and I were involved in the music program. I was in charge of prelude music, which were a set of organ/piano duets that I played with Charlotte, my RS president. (No pictures of this, sorry.)

Then after church the rest of Brian’s siblings gathered at our house for their family’s traditional Christmas Day breakfast/brunch of huevos rancheros. (Um . . . no pictures of this, either.)

Finally . . . before the children exploded . . . we opened our presents. Kathryn and Randy gave Brian and I a set of cute little containers for homemade ice cream, along with a beautiful ceramic artwork by a potter Brian used to go to school with (it’s now hanging on my dining room wall). I gave Brian a new watch, which turned out to be the exact same model/brand as his old watch . . . and the exact same model/brand as Randy’s watch. Brian gave his old watch to Jeff and the three of them all held up their wrists in proud display of three-generation Timex digital watch fans.

Eleanor enjoyed knitting mittens so much that she whipped together another pair for William, and then wrapped them up using the old box-in-a-box-in-a-box trick.

Here is William in his pajamas, which he changed back into as soon as we returned home from church. The hat he’s wearing was a Christmas Eve present, and he loved it so much that he wore it nonstop for pretty much an entire week. Even in church — I was in the choir seats, and looked down into the congregation to see my son wearing his sherpa trapper hat in the chapel. I pantomimed for him to take it off, but he merely shook his head, quietly placing his hands on the ear flaps as if to prevent me from using my psychic powers to remove it.

I think he wins the Most Cuddliest Award.

Jake and Sven volunteered to cook Christmas Day dinner, which was more than fine with me. They chose to make sushi and other Asian-inspired food, in tribute to the trip to Japan that they had taken together the previous spring (and also because sushi is delicious).

Besides the sushi — which included breaded panko chicken as one of the fillings, wow — there was this stir-fried hoisin duck with bok choy dish that tasted fabulous.

There were also supposed to be gyoza, but we didn’t have the correct kind of gyoza wrappers, so instead we had a bowl of gyoza-tasting filling scramble. It still tasted great.

Working together, we made roll after roll of sushi in no time. There was a big row of sushi platters going down the entire table.

AND YET. It all disappeared in about 15 minutes. Yummmmmmmm.

More games, more treats, more family, more everything that evening. I made sure to keep the “cookie tree” (i.e. the three-tiered cake stand) well stocked through the day. Caitlin and Randy and the kids and I had all helped frost and decorate a big batch of my mom’s sugar cookies, and it was fun to set them out for everyone to enjoy, along with a stock of highly-coveted sold-out treats from Trader Joe’s that I had stashed away in early November. (Chocolate Mint Mini Shortbread Stars, and Chocolate-Dipped Candy Cane Jo-Joe’s. They sell out almost immediately after Thanksgiving.)

We also ate the figgy pudding I had cooked with my pressure cooker a few days earlier. It was . . . okay. I think there was a typo in the recipe, because it gave instructions to soak a bunch of dried fruit in warm water to plump it, but then only uses a few pieces for the top of the pudding. What about the rest of the fruit? Eh, so it was kind of dry. Next year I’ll see if I can fix that.

Here is Eleanor holding one of the puddings.

Yeah, her holiday outfit is eclectic and adorable. Here’s the full view:

So wonderful! Her pretty floral socks say “STOP TALKING” around the cuff. Every thinking woman needs to own a pair of those.