I have a friend who is a choir teacher in the school district just north of where I live, and she agrees with me that, for some reason, March is the busiest time ever for families with kids who do music.

It’s been this way the last few years, but the crunch seemed extra hard this time around.

The performance of Cantata Memoria was last night. It’s the most beautiful piece of music about the saddest thing ever. We’ve been listening to her practice CD in the car, so I’ve basically been driving around town for the last three weeks with tears coursing down my cheeks.

This piece was commissioned and premiered last year for the commemoration of the 50th anniversary of the Aberfan disaster — an event that is still strong in the cultural memory of the UK, but relatively unknown here — when a hillside of slurry from a coal mine collapsed and buried the local elementary school, killing 116 children and 26 adults. The coal mine operators had been warned about the collapse beforehand, but since environmental law and industry regulation didn’t exist in 1966 the way it does now, the mine ignored the warnings, and tragedy struck. (The parents insisted that their children’s death certificates listed the cause of death as “Buried alive by National Coal Board.”)

Anyone clapping their hands in glee over the would-be demise of the EPA needs to take a long, hard look at what life was like before.

“Cantata Memoria” is performed in English, Welsh, and Latin, and incorporates a musical reenactment of the landslide, a chorus of children’s voices, and repeated images of birds and light in memory of all children everywhere whose lives are taken through the greed and cruelty of adults.

Brian and I were especially impressed with how composer Karl Jenkins chose to musically depict the landslide — the chorus sings the Welsh pitran patran in increasing intensity to show the storms that created the hillside collapse, counterpointed with the children’s voices singing “All Things Bright and Beautiful,” with its lyrics about running rivers and waters rushing by. When the “landslide” struck, the children’s choir turned its back to the audience, and the baritone soloist sang “Nothing . . . nothing . . .” while the children sang a Welsh bedtime lullaby. It was all very affecting. There was a video presentation that accompanied the performance, and it included archival news footage of the children’s funerals. Let’s just say that we’re lucky Brian didn’t have to escort a bawling Brooke out of the performance hall.

But just like that — I had another great reminder of why I put up with all the insane carpools, early morning lessons, dinners eaten in cars, and harp harp harping on practicing. 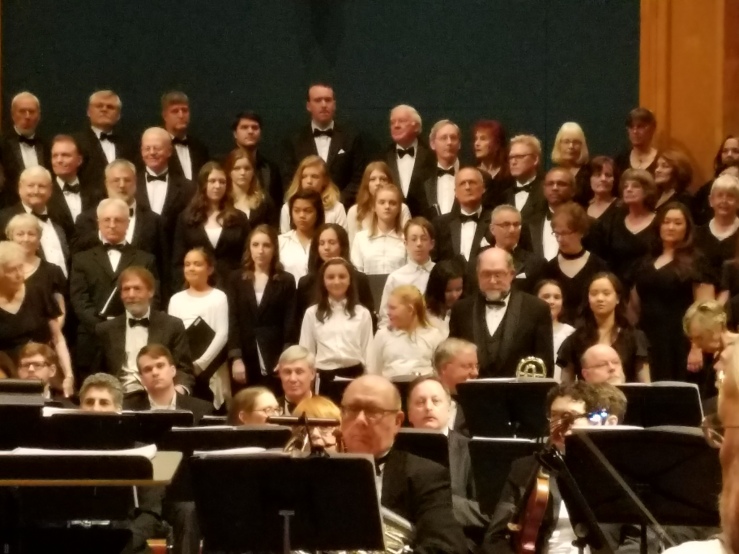 “But if to be alive is to belong

Sing it until the end of the night,

Sing it, sing it, for our children loved light,