Yup, I’m still typing all of this entirely with my left hand. Still sucks. Only ten more days until my appointment at the hand clinic.

But let’s not focus on that. To tell the truth, other than my hand pain and Eleanor’s ongoing depression/eating thing, my family’s situation is fairly ideal for weathering this storm. We’ve managed to do quite a few fun things since shelter-in-place began.

We’ve been on quite a few hikes and interesting walks. Thanks to my collection of hiking books, it’s easy to find trails that are less visited (research always wins the war).

Meadowdale Beach (during the very first week of lockdown, back in early March). The cold weather worked inour favor; there weren’t any people on the water. (Because they have better self-preservation instincts, I suppose) 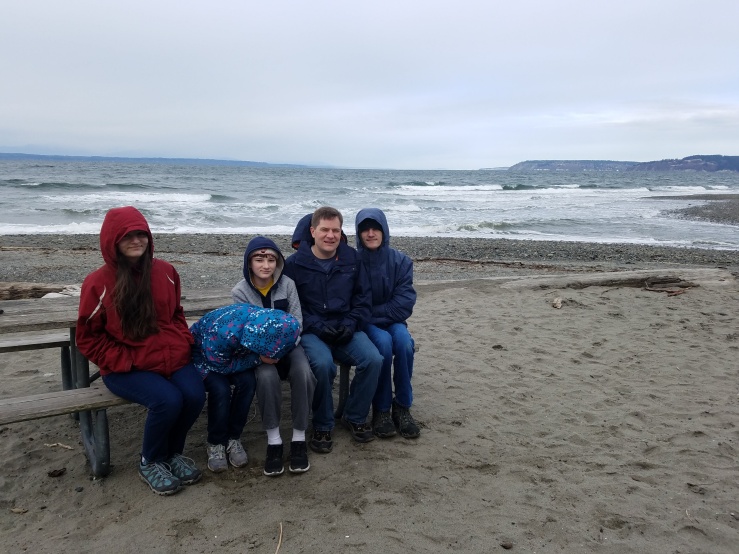 Padilla Bay. Eleanor wasn’t feeling well, so I sat with her on a bench and watched birds.

Robe Canyon. I had done this hike years ago, when Katie was three. It was nice to do it with Brian this time. We got rained on (I slipped and fell in the mud twice, ugh) but that simply made our photos all the more colorful. 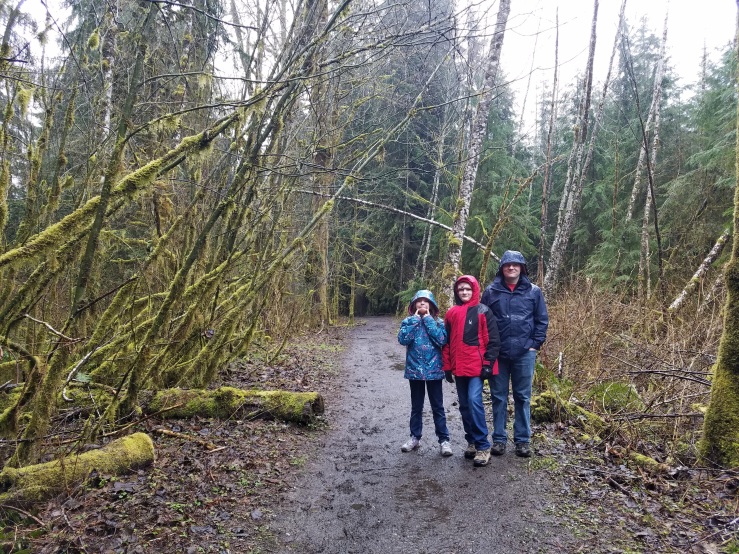 The kids have their ups and downs with homeschooling. Katie at one point spent a morning writing me a letter about how much she hates the Saxon Math program. I decided to count it as “language arts” and move on.

Katie and William did a lot of hands-on chemistry experiments with me, via a website called Mystery Science. We learned how to use old pennies and vinegar to coat steel nails with copper, among other things (this experiment failed, owing to me not using old enough pennies). 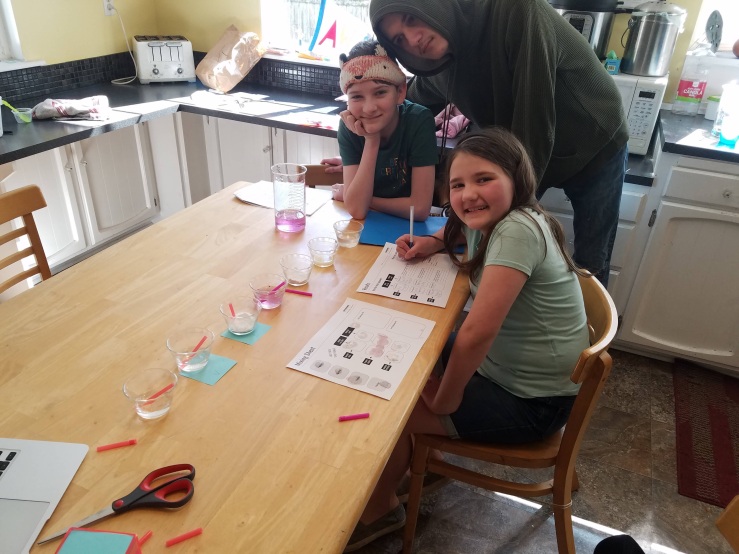 One of the more engaging activities for Eleanor was creating entries for the Edible Book Festival in early April. She made two entries, for “Griddle Women” and “The Chiliad,” and won both 1st and 2nd place in the “Most Punderful” category. Woo-hoo, $25 gift card to Third Place Books!

(Alas, I got no recognition for my entries, “Food the Obscured” and “The Count of Monte Crisco”)

Around that same time, I begin filming Primary Singing Time videos for the families in our ward. Friends and family on Facebook enjoy them, too. Katie and the other children sing with me, and it’s a lot of fun.

William finally finished cutting up the foam for his big bean bag chair. He and Jeff have moved into separate rooms, and it’s a great addition to his new space.

We made “Mormon Food” for General Conference, and had to borrow jello from church friends when I realized I had forgotten to put it on the shopping list.

Hot cross buns for Easter. I watched “Amazing Grace,” the Aretha Franklin music documentary, as well as the St. Matthew’s Passion, and made a most excellent carrot cake with pecan frosting. The girls sang “Gethsemane” for the week’s Singing Time video, and Brian hid an Easter basket in the oven and the attic crawlspace.

Eleanor turned fifteen, and I asked friends and family to send video birthday greetings, which I put together into a surprise montage for her. Kristen made her a coronavirus-shaped pinata, which she gleefully smashed with a stick. Flourless chocolate cake afterwards. 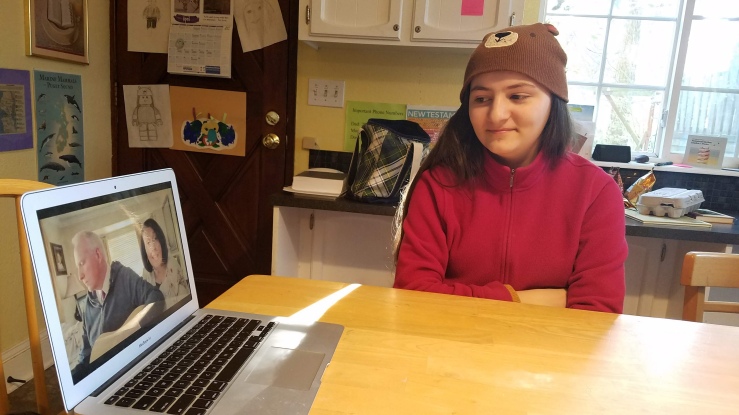 We kicked things off with blanket tents for The Great Washington Camp In (sponsored by the state parks system) and perfected our homemade pizza recipe (overnight rise makes all the dough difference).

Brian and I made a trip down to Olympia for one last visit to The Back Door Bakery, which closed for good on 4/30. Our stimulus check from the government arrived ($83, ha) and we spent all of it on pie and cake and lunch from the Salvadorian place across the street. 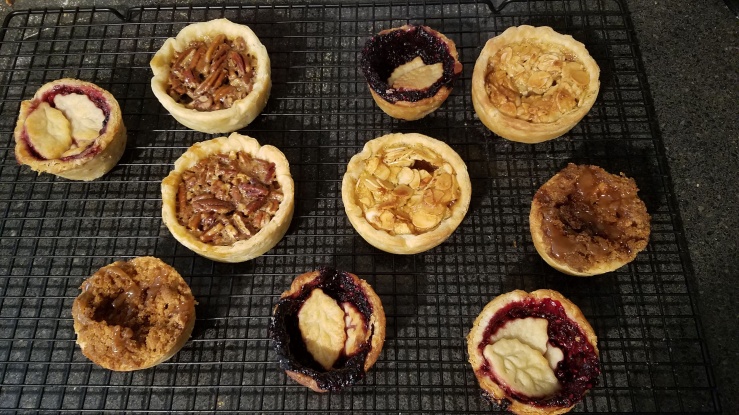 Then came our DIY Disney at Home, to commemorate our now-indefinitely postponed trip to Disneyland. Each day was devoted to one of the different “lands” of the park. Here’s how I described them on Instagram:

Today was Fantasyland day, so we watched “Alice in Wonderland” and had a mad tea party. We attempted to bake replicas of the Matterhorn Macaroons you can get from the Jolly Holiday Bakery, but they spread out in the oven and became Polar Ice Cap Macaroons (they were delicious anyway). Later on we watched “Sleeping Beauty” and made mini fairy dolls and paper flower garlands (Katie is modeling the crown Eleanor made). The evening was rounded out with a few garage swordfighting duels. Best part of the day: sending my kids into impressed shock by reciting every single line of “Sleeping Beauty” along with the film. 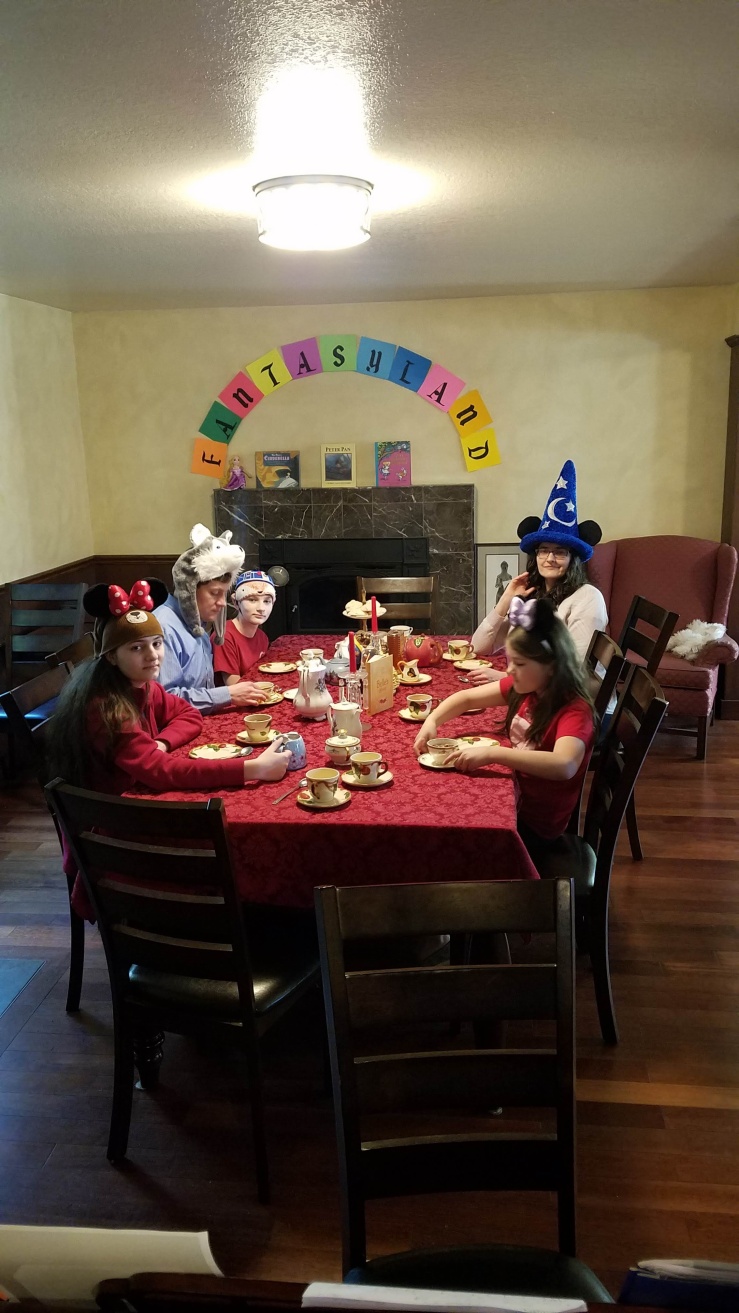 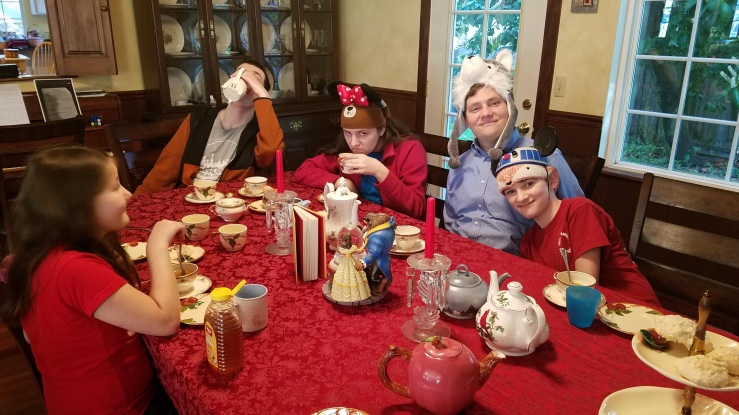 Spring Break 2020, Day 3: Yee-haw! We saddled up for Frontierland today. After a belly-fillin’ breakfast of baked oatmeal, we spent the morning building our own version of the Big Thunder Mountain Railroad. There was a lot of nostalgia in this for me; we haven’t played with the wooden train set in years, and I was pleased to see the teenagers get as absorbed into building and running the trains as the little kids. The afternoon was dedicated to tacos and a screening of “Maverick” (how have I never realized that the screenplay was by William Goldman??). Finally, for dinner we had a hot dog and s’mores cookout, for which Katie has been begging for weeks. Plus, it gave me an excuse to make my mom’s baked beans, which are the best even if they take three hours to make.

(I found youtube videos with full versions of the music that is played over the loudspeakers at Disneyland, and we all agree that the Frontierland one is the best. Great country-western classics!) 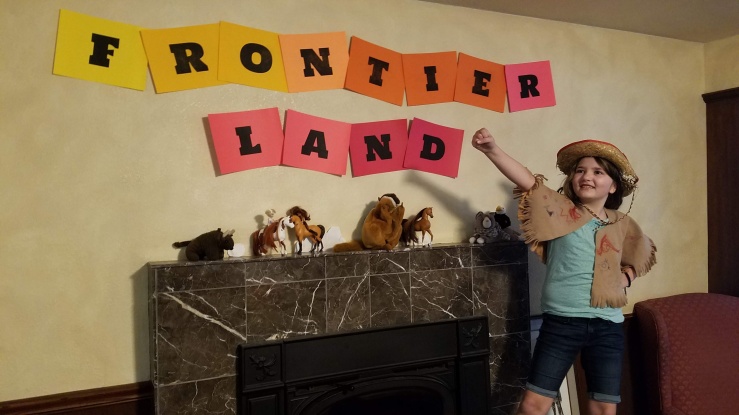 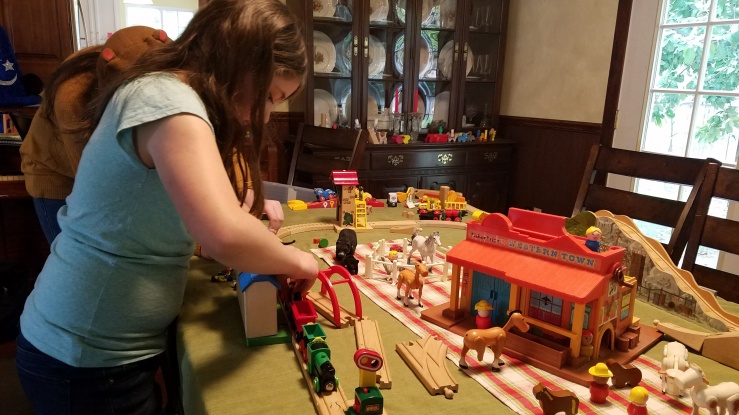 Spring Break 2020, Day 4: We had a tropical trip to Adventureland today! Everyone was excited to try out the package of authentic Dole Whip soft serve mix that Eleanor got for her birthday. We froze it in our ice cream maker, and whoa: it tasted just like the real thing. Besides the sugar rush, we had a fun morning playing the Island games on Wii Party U, and watched “Jumanji: Welcome to the Jungle,” which none of us had seen and proved to be a fun surprise. 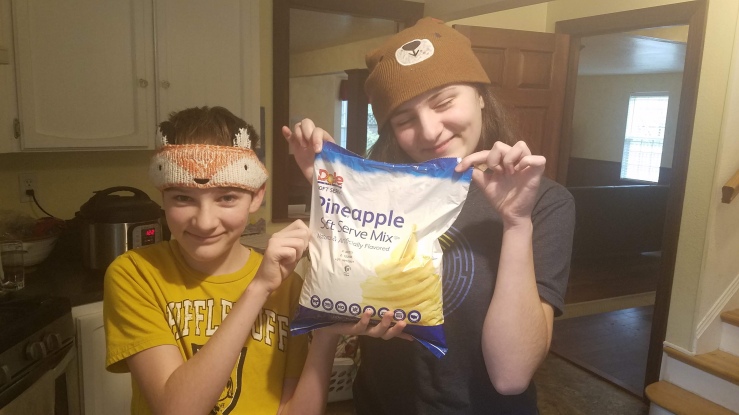 Spring Break 2020, Day 5: Beep-boop, we celebrated all things robot-y and science fiction-y with our tribute to Tomorrowland! Brian started us off with a family Lego Masters competition. Challenge #1 involved creating towers with a limited selection of bricks — and they had to support the weight of a baseball. Challenge #2 was about creating a battle scene between two minifigs (can you tell which one William made?). After a break from “Pizza Planet” (aka Little Caesar’s) we settled down to watch “Flight of the Navigator,” which was great, although I now regret missing the chance to show my kids the epic pile of bananas that is “Space Camp.” After all that, the future took a backseat to the past as we celebrated Shakespeare’s birthday with delicious “gingerbard” cookies. Aren’t they adorable? 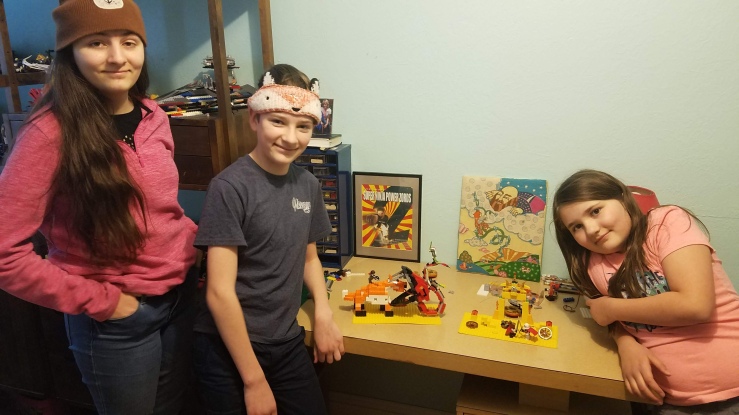 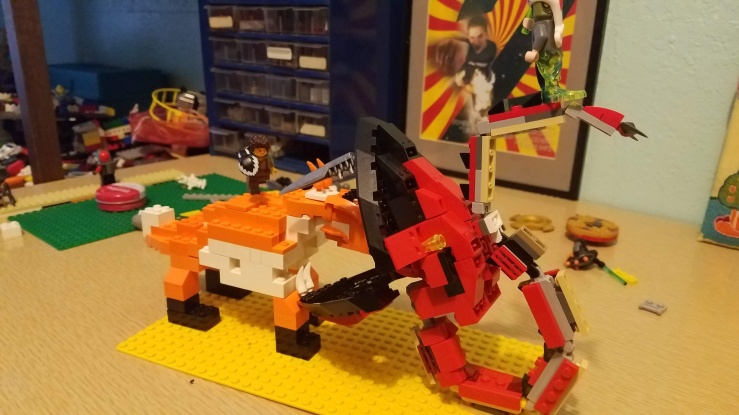 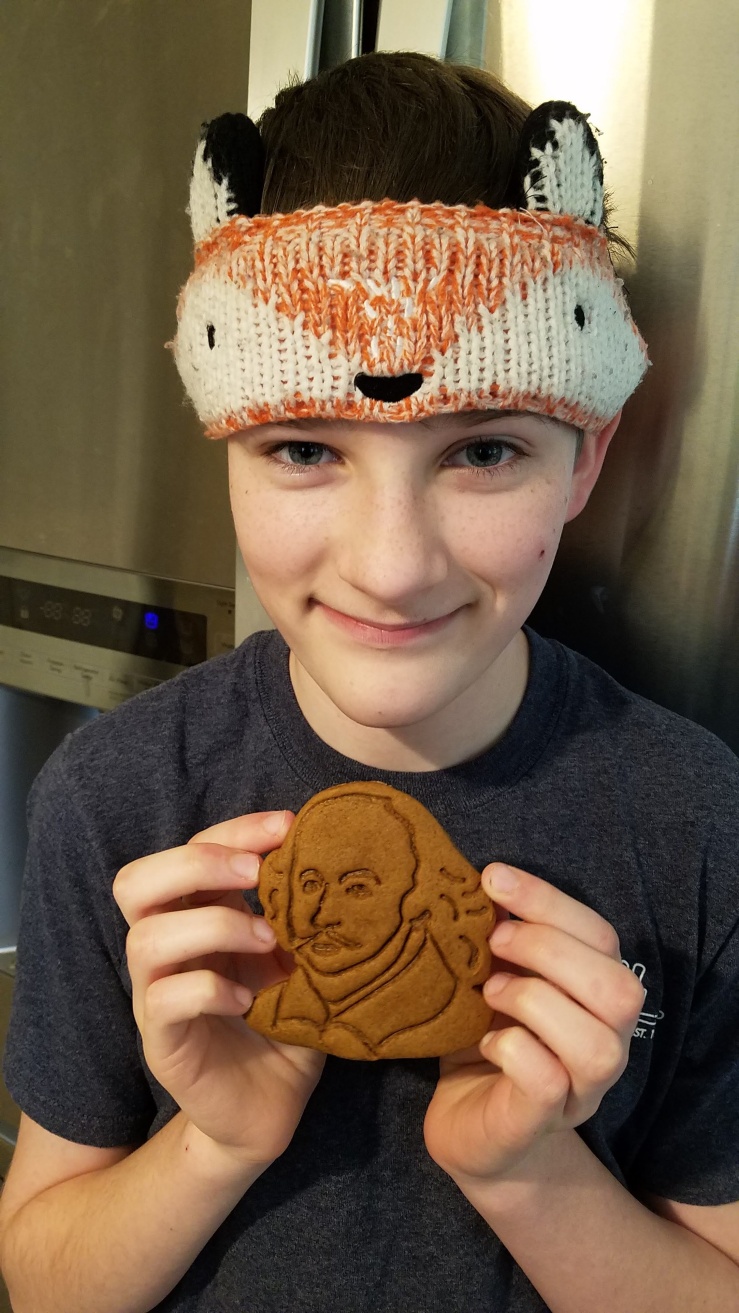 Spring Break 2020, Day 6: our indefinitely- delayed trip to California also included a visit to the Wizarding World of Harry Potter, so we decided to spend a day doing all things Hogwarts, with each of us taking turns teaching a class. William hid stuffed animals around the house for Care of Magical Creatures, which we then used for a blanket-toss game (this was a huge hit). Eleanor showed us how to make fizzy love juice in Potions, and Katie taught how to turn poisonous plants (asparagus) edible in Herbology. Lastly, I taught Transfiguration and we turned origami paper into Golden Snitches. After a lunch of burgers & butterbeer, we settled in for a screening of the first Harry Potter movie, which we hadn’t watched in years (during which I predictably fell asleep 🙄). Whew, throwing my kids five themed parties in a row has been a lot of fun, but also a lot of work. I hope they remember the good times during a period in which so much seemed so scary.

Our last day of spring break was spent on a drive to the Skagit Valley to sort-of see tulip fields and get cookies from Breadfarm. Eleanor actually came along for this, which was a big deal.

Spring was well and truly sprung after the break. The school district started providing a more robust online school program. Katie and William discovered a meadowy daisy patch next to the water towers in our neighborhood. 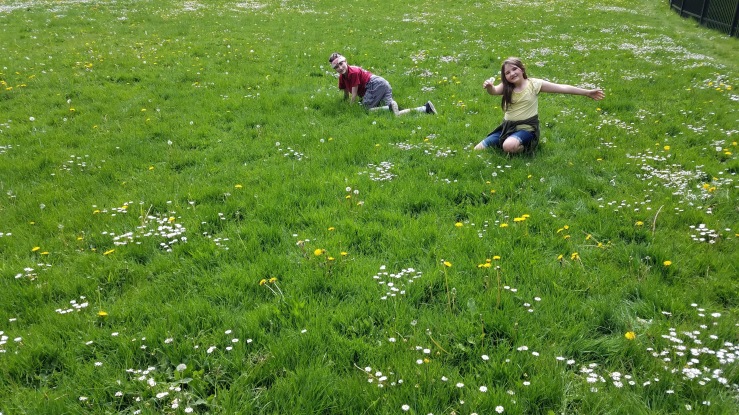 During the first week of May, the seniors at the high school got their caps and gowns, and some parents organized a loosely organized parade to celebrate them. The grads put on their newly acquired caps and gowns and stood (6 ft. apart) near their local elementary or middle school. Then a caravan of 50+ decorated cars drove past all of them along a designated route. It was such a blast — lots of sign waving and horn honking. Jeff and I blasted the school fight song whenever we passed another group of kids. Jeff was especially happy to have a chance to say goodbye to all his senior friends. Probably one of the most uplifting things I’ve done so far. 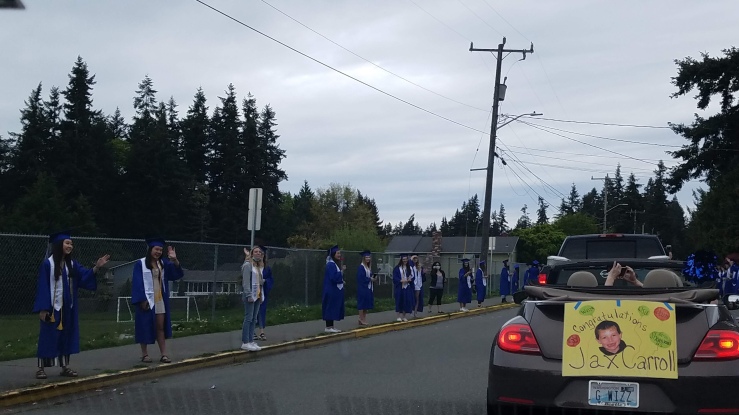 We also observed May the Fourth, aka Star Wars Day. After hurrying through our schoolwork, we ordered Chinese take-out for Orange Mandolorian Chicken, Brocco-Leia Beef, Kung Poe Chicken, Won Taun-Tauns, and Fortune Wookies. Then we cozied up for a screening of “The Last Jedi” (because my kids love porgs) and finished the evening with lightsaber duels and blue milk with whipped-strawberry topping. 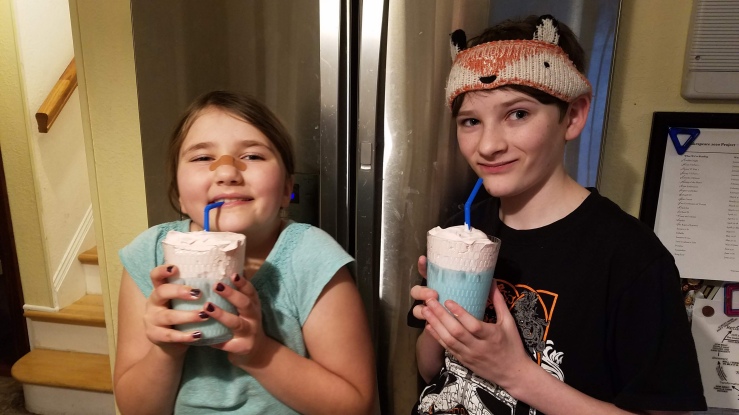 Is that a tiny fairy door on my cardigan? Yes. 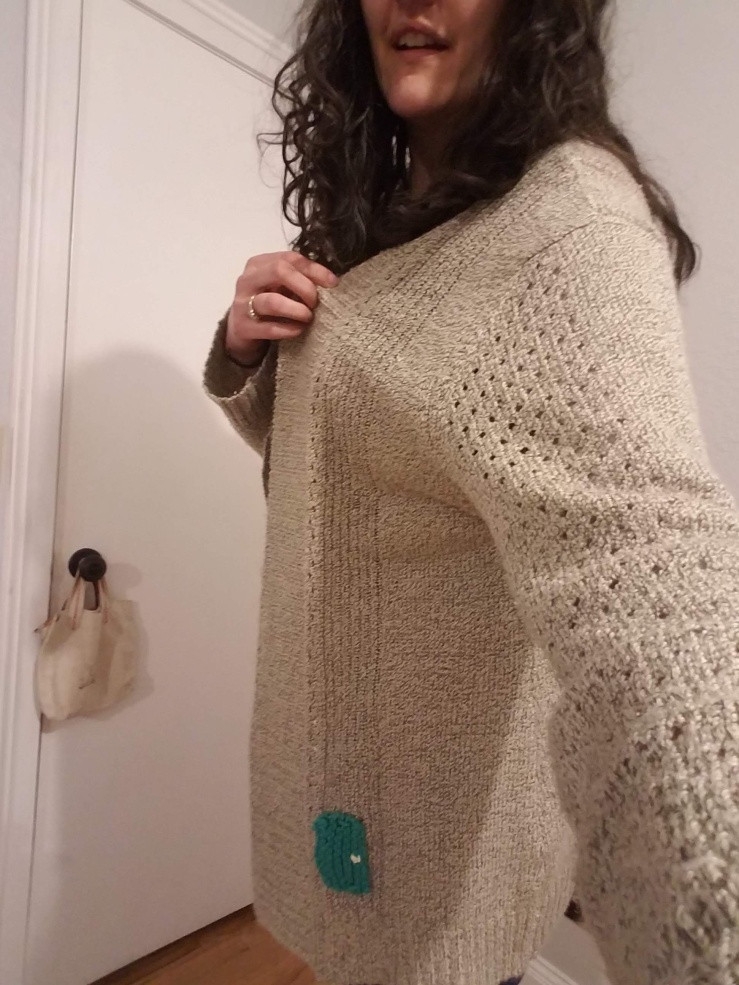 For most of the pandemic, we’ve been holding weekly contests with Brian’s family. Whoever wins gets to choose and judge the next week’s competition. Caitlin challenged us all to make historical-figure costumes out of household objects. Kathryn then instigated a book-spine poetry contest. Peter’s contest was to create fairy doors with a variety of materials and locations (Kristen made a stunning patchwork fabric one; Brian made an origami one; William’s had two doorknobs because fairies.) Anderson was the winner, however, and he started a house-building contest.

Although Eleanor tried her hardest to pander to Anderson’s tastes with a Disney house, the winner was Katie and William’s fairy castle. Which led us to this week’s crazy dance contest.

Mother’s Day weekend came and went. Brian and I spent Saturday doing the Fremont hike in “Seattle Stairway Walks.” Following the trail guide is part hike, part treasure map as we went up and down about a dozen public stairways hidden between houses and leafy alleyways. There were so many beautiful gardens! Fremont is especially fun because there is a lot of public art created by neighborhood residents, from an inspirational poem posted at the bottom of a stairway, to a mirror on a street sign labeled “You’re Brilliant!,” to a little bench next to a telephone pole labeled “Accidental Park.” (A play on the name of Seattle’s Occidental Park.) 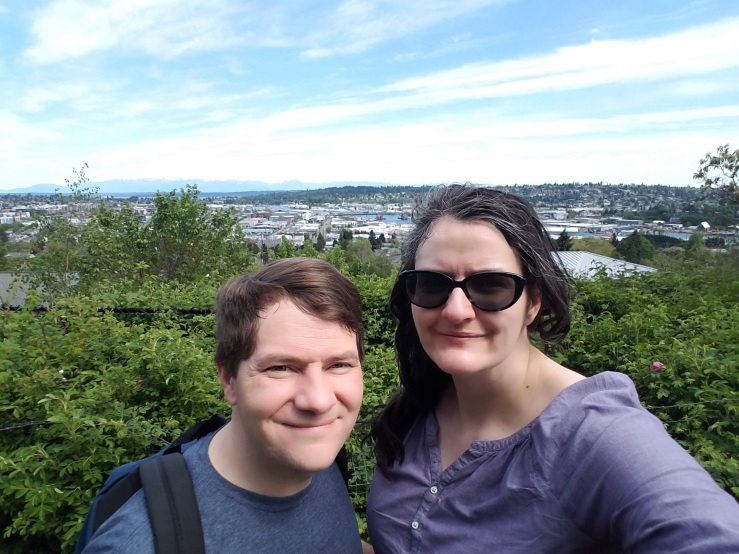 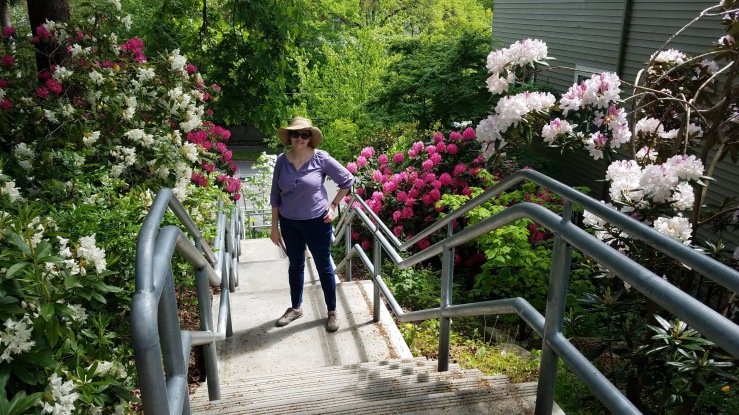 Brian then spent the rest of the day on my present: cleaning up our overgrown rose garden and installing a new birdbath. I love it SO SO much!

On Mother’s Day proper, Katie knocked on my bedroom door. “Mom, are you still in your pajamas?” No, I had already showered and dressed. “But Mom,” she wailed, “you have to still be in bed, or it ruins the magic!” Very well, then. If that is what it takes to get breakfast.

I also made the Cherry Shortcake Bars from Midwest Made, because it seems like springtimey “mom-food,” and the kids cooked sushi for dinner.

Annnnnd I think we’re all caught up!