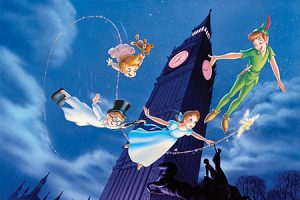 The local junior high is currently putting on a production of Peter Pan.  A friend of mine has a son starring in it, and since she wasn’t able to attend herself (long story) she decided to buy and give away as many tickets as she could to show her support.  Which is how I ended up with free tickets for me, Jeffrey, and Eleanor for a matinee today.

What I wasn’t anticipating was how freakishly elaborate a production is was going to be.

I knew that school theater programs were big in Utah, but I guess I had forgotten exactly how big.  Not only did they do a musical — the whole, no-parts-cut-out shebang, but they also padded as many extra parts into the show as is humanly possible.

So: there were roughly 200+ kids in the show.  Many of them starred as extra pirates, lady pirates, mermaids who waddled onstage whenever the pirates did a dance, a special squadron of Tiger Lily’s maidens who could do flips, clog dancing lost boys, and a special squadron of Indian lads whose job it was to hold spears, stand in the background, and exude as much manliness as an eighth grader can muster.

THEN there were the STARRING padded roles, such as the boy who pantomimed Peter Pan’s shadow, a narrator who made frequent appearances and called herself the Darling family’s chambermaid, ballet dancers who frolicked about as woodland creatures, a troupe of three year olds serving as mini-fairies, a girl dressed as a fairy who reprised the “Never Land” song during the Act II scene change (I called it the “for kids who can sing but not act” role), and — horrors! — REAL GIRL portraying Tinkerbell INSTEAD of a flashing beam of light.

How can you replace a flashing beam of light with a human being?!?  Where’s the personal touch?!?

Actually, I love and admire theater teachers who can be creative enough to allow as many kids participate in a theatrical production as possible.  Not to mention that it helps pack ’em in during ticket sales.

The kids were completely absorbed in the production — they had real flying, elaborate sets, and dance numbers rivalling Berkeley Busby.  (Wait . . . or is it Busby Berkeley?)  Eleanor was afraid of Captain Hook, so she was quite thrilled to see him get eaten by the crocodile at the end.

Jeffrey was so saucer-eyed over the idea of Never Land that he was distraught when the Darling children decided to return home to England.  So much so that he had to jump out of his seat and run up the aisle.  I couldn’t chase after him (what with the broken rib) and was relieved when an usher returned him to his seat.  It’s annoying that he did that, but I feel for the lil’ guy.

Starring Miss Darlene by Amy Schwartz — Darlene the hippo wants to perform onstage, but she keeps flubbing her lines.  Her role as the Flood in “Noah’s Ark” leaves everyone wet, and she mistakenly falls asleep onstage during “Sleeping Beauty.”  Panic ensues, until the critics’ reviews appear, each one hilariously misinterpreting Darlene’s errors for theatrical innovation.  Schwartz is a hidden gem in the picture book world — her illustrations are elegantly simple and childlike, and easy to overlook on a bookshelf of flashier artwork.  But her writing is top-notch; comedic pacing in a picture book is more difficult than it looks, and in a gently farcical story like this one, even more so.  A funny read aloud for the starstruck set.

One thought on “Plenty of Dancing, Not Nearly Enough Prancing”