Our boy Jeffrey turned seven years old yesterday.  He’s such a lovely freckle-nosed one, and we had a wonderful birthday party for him.

He really wanted an “outer-space” themed party, so we gave it to him.  The kids made these funny green alien masks out of craft foam and then headed straight for the hammock for a swing.  It was pretty darn cute seeing all these little green faces popping up from the edge of the hammock (Jeffrey is the second from the left):

We also made a UFO out of paper plates and had contest to see who could toss it the farthest; then we played a darts game with a dart board that looked like the solar system (erm, kinda.  It was made from rings of tape affixed to an old blanket).  Finally, the kids smashed apart a pinata shaped like a rocketship.  It was all very satisfying. 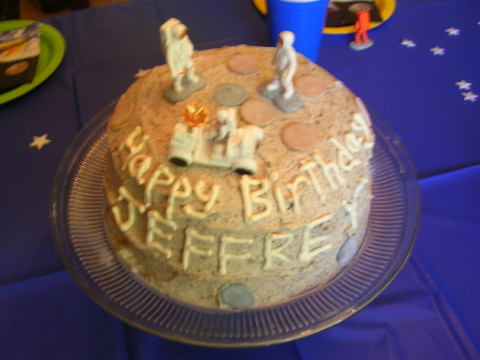 I baked the birthdaycake in a metal bowl so I could flip it upside down and make a “moon” cake.  The idea came from FamilyFun magazine.  The “craters” are brown and purple Necco wafers.

To top off the celebration, Jeffrey lost his first tooth later in the evening, and had the thrill of putting it under his pillow for the Tooth Fairy.  She gave him fifty cents for it, which he thought was incredibly generous.  There’s no inflation like tooth fairy inflation, says I.