This year the children were well aware of what Christmas present I had chosen for Brian — I had inherited an old Nintendo Wii from my brother, and had to spend afternoons painstakingly removing his personal data (idiotic photos and Miis).  What’s amazing is that they managed to keep the secret, and even went so far as to purposely mislead their father.

“Daddy, do you know what you’re getting for Christmas?  A hot dog tree!”

And then, because Jeffrey hasn’t learned to wink on his own, he would look at me and use his hand to manually close and open one of his eyelids.  Heh.

This is a snow elephant that Brian made about two weeks ago, with some neighborhood kids pitching in.  Note the baby elephant holding its mother’s tail!  It collapsed the very next day, but Brian says that’s just the perfect set-up for his next project: a snow lion feasting on the remains!

Every year Brian’s siblings try to spend one day during the Christmas season constructing some kind of structure out of gingerbread.  They never make houses, but instead try to think of some unusual thingamabob with lots of room for creativity and cleverness.  This year’s pick was a candy reenactment of the 1969 moon landing.  See the Earthrise in the background?  The tiny American flag made of strips of candy?  The row of chocolate aliens in the background?  Yeah, it’s not one of our finest.  (That prize goes to last year’s creation, a gingerbread White House that included a bowling alley and a movie theater with a tiny candy screen showing Super Fly.)

Brian’s mother cooked up the idea for a family holiday service project this year.  There is an LDS congregation here in Salt Lake that consists entirely of Burmese refugees.  We decided to throw the children a Christmas party.  In addition to serenading them with ukuleles and putting together a very, very two-bit puppet show, the kids dressed up for a nativity pageant.  Eleanor is the littlest angel (the one with the pink flower in her hair).

Brian, his brother Peter, and our brother-in-law Sven were drafted to be the Three Kings.  The costumes were found in some church closet, and I have to say they are, um, stunning in many ways.  Especially when Jeffrey decided at the last minute to join his father, making possibly the first King to ever bring along his own Mini Me.  In the picture he is seated at Brian’s feet; for some reason there were two bejeweled Pilgrim hats in the costume box.

Later that same evening, Brian’s grandmother hosted a big extended-family dinner at the Lion House, and Eleanor was thrilled to sit next to Sven, who is apparently now in the lead for the title of Favorite Uncle.

Jeffrey took the whole affair at the “fancy restaurant” quite seriously, putting his napkin on his lap, using the correct fork — using a fork at all! — and staying in his seat for a whole fifteen minutes before trying to take a walk around the room.

This post makes it seem like I didn’t do a thing with my family.  Not true; we had multiple Christmas parties with them as well.  I was usually just too busy enjoying myself to remember to take pictures — and also there were no opportunites to take a pic of my husband in a silly costume.  But my parents and two of my brothers came to my house for Christmas Eve dinner, and we cooked a big ham and played the Thimble Game.  And then we ate pie and cookies, couldn’t be better.

Here we are on Christmas morning!  The kids slept in, so I took the opportunity to shower and get dressed before we all went upstairs.

Eleanor was given a bicycle for Christmas, complete with what she calls “long shiny things coming down from the handles.”  Santa has recently discovered that bikes can be purchased for $5 at DI and then fixed up for presents.  She insisted on riding circles around the driveway the second she got dressed. 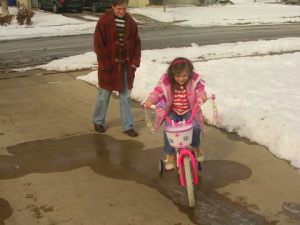 Santa also found a vintage Fisher Price piano at DI for William, which he plunked Schroeder-style for hours on his tummy.  After we were all dressed and fed with a pan of cinnamon rolls my mother had given us, we drove down to Provo to relax and spend more time with family.  What a great Christmas — what a wonderful family — a glorious time was had by all.

3 thoughts on ““No, you’re getting a thumb detector!””