Behold the mighty lion!  It is seated among the remains of the elephant sculpture he made a few weeks ago.  Like it’s feasting on its carcass or something.  Mmm! 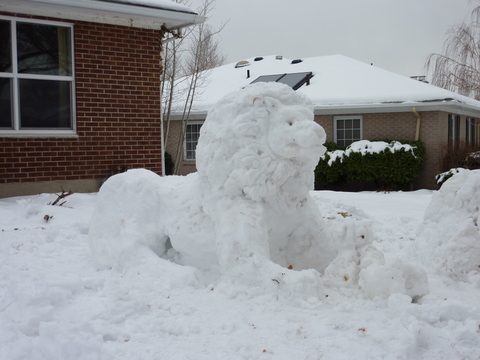 And the thing de resistance — a towering giraffe!  There are no structural supports inside of it.  All snow, all the way through.

He had to use a ladder to build up the neck, and the head fell off twice before he found one that stuck.  I especially like the way it looks as if it were nibbling on the tree.

Today the snow was wet once more, and Brian made a snowrilla.  There’s no word on whether or not it plans to snatch up Eleanor and climb a skyscraper.

Initially, we couldn’t decide if the yard need this gorilla, or a snow rhino.  I argued that a rhino would fall apart too quickly (big heavy head) whereas Brian said a gorilla wasn’t visually interesting.  In the middle of this discussion, Jeffrey scampered through the room and shouted, “Why not a rhinocerous with a gorilla riding on TOP of it?”  But Brian asserted creative control over the project.

Just like the dinosaurs, the snow critters are causing a lot of slowed traffic and picture-taking on our street.  Almost every day my work in our front room is interrupted by some sort of flash going off.  But what we’re really excited about is that other kids in the neighborhood have begun building their own snow creations.  The two girls who helped us with the elephants have made a little bear and duck in their yard, and the family around the corner have constructed a big robot and a series of redrock-inspired arches.  Yesss!

What’s really amazing is that both of these creatures are still standing; it’s been so cold that they haven’t melted (although the giraffe’s ears are looking a little thin, and its legs grow more lopsided by the day).

We also hosted a sledding party last week, attended by Brian’s parents and two of his siblings.  The kids adored bossing around their aunts and uncles, dictating who got to go down the big hill with them.  Grandpa even pulled Eleanor back up the hill (can you tell they are the only grandchildren on that side of the family?). 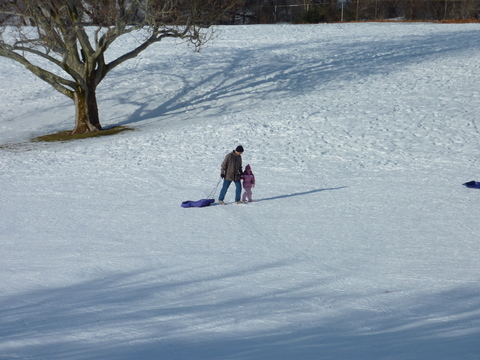 The weather was sunny and warm, but the snow was packed down hard, making for a perfect sledding day.  Afterwards, we made ultra-thick hot chocolate and homemade doughnuts.  Mmmmm, delish!