My friend Angry Baker gave me her personal “Most Likely to Throw a Themed Party” award.  To accept the award, I must pose with my favorite homemade treat; to decline, I must take a nap.

(The caption is also part of the rules.  Oh, and the nap lasted about .03 seconds, or however long it takes the shutter on my camera to open and close.)

Preheat oven to 350 degrees.  Take 1/3 of the coconut and the butter and grind it into a ball in a food processor.  Combine this with the rest of the coconut (use your fingers).  Press this into a pie pan, leaving the top edge fluffy.

While the crust cools, make the truffle filling.  Put the chocolate in a bowl; bring cream just to a boil, then pour over the chocolate.  Let the mixture sit for 10 minutes, then stir it with a whisk until it is smooth and combined.  Pour filling into cooled crust, then refrigerate it for at least 1 hour before devouring.  (I like to let it warm on the counter for 20 minutes or so before eating it.)

It tastes like a gigantic Bounty bar, only much, much better.  Here’s a prettier picture of the results: 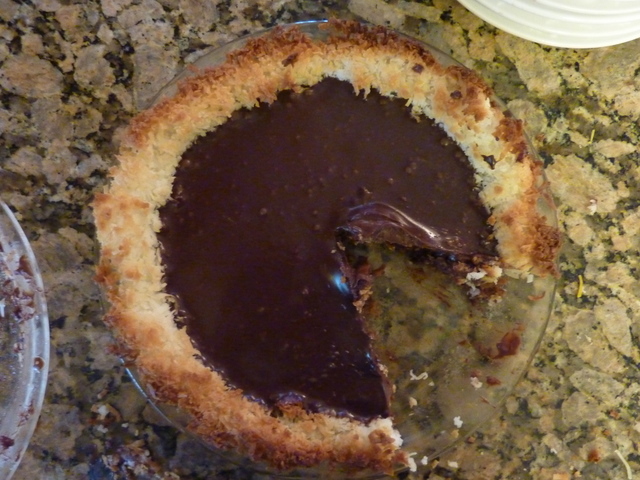 Oh!  I also just realized that I could have titled his post “Pie Napple.”  This is probably a sign that I need to go to bed.