Did you know that November is Picture Book Month?  At least according to a variety of kidlit gurus.  It’s partially in response to those that say the picture book is a dying art form, with fewer being published every year.  (Oh, publishers!  You do realize that to stay in business, you have to invest in future readers, yes?)

Who am I to not jump on this bandwagon?  I mean, just look at this cute little logo I get to use:

An owl reading to rodents instead of eating them?  Sign me up.

Here’s a off-the-top of my head list of Picture Book Gems — books that I’ve found throughout the years as a librarian and mother of small children, read over and over, and loved, loved, loved.  I’ve included quotes from other review journals to give you a taste of what the books are like and about.  Because I am lazy like that.

How do I know these books are great?  Because I can still remember them years after reading them, that’s why. 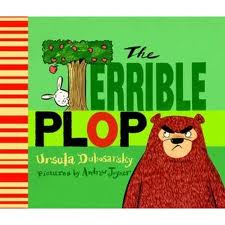 The Terrible Plop by Ursula Dubosarsky — Some books read aloud to large groups of kids well, but only after a fair amount of practice on the reader’s part. Other books feel as if they were made to be read out loud from the moment your lips form the first word. This book is one of those rare titles that does precisely that. The cadences bounce along absolutely perfectly. The length of the story itself is never too short or too long. There are plenty of chances to do silly voices, and a wonderful bouncy rhythm that will aid even the most rhythmically challenged amongst us. A boon to librarians, and the perfect companion for any parent or grandparent who needs a story that will amuse both children and adults alike. You cannot read this book aloud and not fall in love with it, at least a little. — Betsy Bird, A Fuse #8 Production (And in case your mind is in the snickering gutter, the “plop” is referring to the sound an apple makes when it falls into a pond, which manages to give a bunch of forest critters the heebie-jeebies.  Consider it the 21st-century Chicken Little story.)

John Willy and Freddy McGee by Holly Meade — “Run, John Willy! Run, run, Freddy McGee!” encourages the energizing, urgent narrative voice of this marvelous picture book that bursts into an explosion of color and festival of language as soon as the guinea pigs make their escape. “Circling the hassock, scattering the marbles, squeezing beneath the table they scooted!” Holly Meade’s scintillating text holds its own on dazzling pages of color showing the two small guinea pigs running through brilliantly decorated rooms that each have their own distinct and vibrant palette. — Children’s Cooperative Book Center  (Seriously, don’t knock this book until you’ve read it aloud.)

Bubble Trouble by Margaret Mahy — Mahy is clearly in love with language here, as she offers a text that flounces and bounces like the baby in the bubble: “But she bellowed, / ‘Gracious, Greville!’ / and she groveled on the gravel / when the baby in the bubble / bibble-bobbled overhead.” Dunbar uses watercolors accented with cut paper to chronicle the silliness. The story goes on a bit long for the youngest, but children will find their ears perking up at the tongue-twisting text, and they may become word lovers, too, after listening to this. — School Library Journal  (I would love to see this book up against Fox in Socks in some sort of tongue-twister  showdown.)

Elizabeti’s Doll by Stephanie Stuve-Bodeen — Set in a Tanzanian village, the story tells of Elizabeti, who watches her mother care for her new baby brother and longs for a little one of her own to cuddle. She has no doll, so instead she looks around for a suitable “baby” and soon finds a rock that’s shaped just right. Carefully mimicking her mother, she bathes, feeds (her doll is “too polite to burp”) and changes “Eva,” and when doing chores ties Eva to her back “with a bright cloth called a kanga,” just as her mother does. Downcast when Eva is misplaced (her sister accidentally uses the rock for the cooking fire), Elizabeti finds her special doll in time to sing her to sleep. Stuve-Bodeen’s well-balanced prose strikes just the right tranquil, gently humorous tone. — Publisher’s Weekly (The first in a series, too.  Based on the author’s experiences as part of the Peace Corps.)

The Baby Goes Beep by Rebecca O’Connell — From playtime to mealtime, bath time to bedtime, the active toddler in this on-target picture book punctuates a day’s activities with beeps, booms, splashes, and other irresistible words. Using bouncy text (“The baby goes Yum / The baby goes Yum Yum / The baby goes Yum Yum Yum Yum”), O’Connell plays on the delighted repetition and experimentation that are hallmarks of language development. Seasoned illustrator Wilson-Max, whose saturated colors and sturdy black outlines have earned him a following among toddlers and preschoolers, humorously extends O’Connell’s words. — Booklist (I should also say that Rebecca used to be my coworker at the Carnegie Library of Pittsburgh, and if she reads this, I’d like her to know that I’ve read this book to all four of my kids and they have all adored it.  Writing for babies: way harder than it seems.) 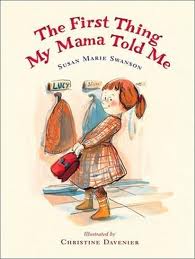 The First Thing My Mama Told Me by Susan Marie Swanson — A pleasing departure from the trend toward books that deal with a child’s dislike of his or her name, this title begins, “When I was born, the first thing my mama told me was my name.” Lucy’s name comes from a “long-ago word for light” and shines for her as a constant reminder of her uniqueness and special place in the world. It is iced on her first birthday cake, painted on the stool she uses to get a drink of water, and scribbled everywhere her three-year-old hand can reach . . . The final spread of Lucy’s name in the night sky is the only illustration in which color extends to the edges of the pages, filling them with her exuberance and contentment. — School Library Journal (My first daughter was almost named Lucy because of this book.)

Overboard! by Sarah Weeks — This rollicking picture book features one of the most beloved activities of older babies and toddlers: throwing, knocking, pushing or pulling things onto the floor. “Drippy, slippy-slidey peaches. Peachy peaches, nice and fat. Peaches going . . . overboard! Peaches, peaches, splat! splat! splat!” Author Sarah Weeks captures the delight in a lilting text about a young bunny who can’t get enough the game. Crinkly raisins go over the edge of the stroller tray, rubber ducky soars out of the tub, and stuffed animals fly from the crib. The clean-up may be exhausting for adults to contemplate, but young children will just relish the fun. Bright, cheerful illustrations provide a lively accompaniment to this terrific read-aloud. — Cooperative Children’s Book Center (Seriously, you may find yourself chanting this book in your sleep.  The rhymes are Just. That. Catchy.) 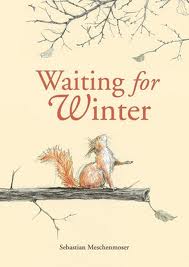 Waiting for Winter by Sebastian Meschenmoser — Deer nonchalantly mentions that, “Winter is almost here. I think it is going to snow.” Since Squirrel has never seen it, he decides to forgo hibernation, and see what this “white and wet and cold and soft” substance looks like. He waits and waits and waits—but to no avail. He decides to do some exercises in order to stay awake, and along the way he wakes up Hedgehog. They wait and wait, but still no precipitation. Soon, their boredom-busting antics awaken Bear. Based on Deer’s definition, each animal finds what he thinks is snow, but readers will know that they’re wrong, and will be as delighted as Squirrel, Hedgehog, and Bear when the real flakes begin to fall. — School Library Journal  (The review fails to mention that this book is also FREAKING HILARIOUS.)

Always in Trouble by Corinne Demas — Emma’s dog Toby is incorrigible. Each day of the week brings a new indiscretion: Monday he gets into the garbage, Tuesday he runs into the road, Wednesday he eats a loaf of freshly baked bread, and so on. By Sunday, he’s worn out and rests, but on Monday it starts all over again. Emma’s parents have had enough and Toby is enrolled in obedience school, where he turns out to be the star pupil. But the following week he’s back to his old tricks, and special training with the teacher is required. Toby returns from his lessons with “a strange twinkle in his eye.” A new week brings many surprises from Toby: “On Monday, he took out the garbage. On Tuesday, he baked some bread . . .” Corinne Demas’s fresh, funny story is matched by Noah Z. Jones’s blithe illustrations that have a cartoonlike simplicity perfectly suited to the whimsical spirit of the text. — Cooperative Children’s Book Center (I should also mention that when Eleanor was four, she loved this book so much that she drew a picture of it to hang on her “About Me” poster at preschool.  And as a bonus: it features an African-American family even though the book has nothing to do with being African-American.  That’s rare, alas.)

A Glorious Day by Amy Schwartz — Filled with child-centered details, Schwartz captures the busy-ness of the lives of young children, giving weight to both the routine within each family and the rhythm of the larger community in which they live. There is comfort in the small moments that define a young child’s day (for Henry, lunch is followed by a nap, followed by a trip to the park where he plays with his friends); and excitement in the unexpected (everyone pitches in to look for Princess, Henry’s pet bird who escaped into the halls when the apartment door was open). The text’s terrific pacing is complemented by the vignette-like illustrations, which effectively use white space to distinguish between the activities pictured within the diverse families shown on each page spread. — Cooperative Children’s Book Center (This is a book that I totally dismissed until I read it aloud.  That text is more nuanced than it first appears.  I find myself quoting it all the time when interacting with my children’s day-to-day activities.)

Annnnnd that’s ten.  For now.  Perhaps more gems to follow?  What do you think?