I don’t think any of our other children’s third birthdays were celebrated at quite the level that Katie was on hers.

This is mainly due to the efforts of a doting big sister.  Eleanor planned the Katie-fest for weeks in advance, cutting and pasting in the craft room, planning games and thinking of what Katie likes best.

The theme of the party would be “pink,” Eleanor decided, “because that’s Katie’s favorite color.”  (I had to talk her down from other themes based on Eleanor’s favorite movies.)

The celebration began when Katie woke up.  Eleanor had made a trail of paper hearts leading from Katie’s bedroom downstairs to the kitchen, where there was a special breakfast waiting — a piece of toast cut into the shape of a dinosaur and spread with Nutella.  (I had to talk Eleanor down from chocolate waffles.) A birthday crown lay on the high chair.

And if that wasn’t enough, there was a special birthday dinner (Aunt Kristen & Uncle Sven were in attendance) with a big chocolate cake.  (I used a bit too much pink food coloring in the frosting, so it was a bit day-glo.) 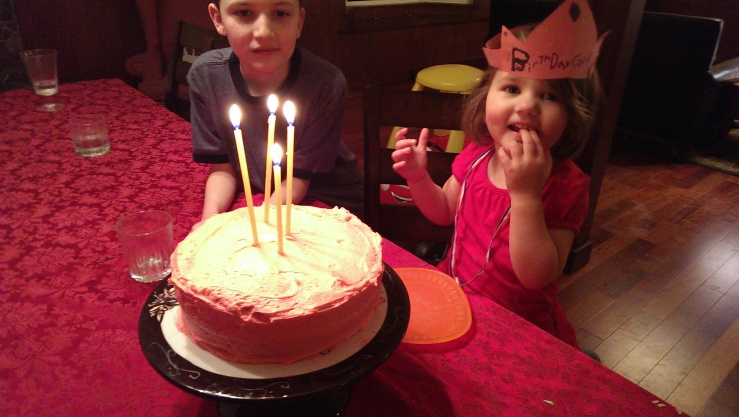 . . . followed by games.  Eleanor did everything; it was probably the easiest birthday party I ever hosted.

First, Katie got to go on a treasure hunt.  She followed a pathway of (more) pink paper hearts to a little suitcase full of all the shiny things Eleanor had managed to collect: a little gold foil box, fake diamonds, glass marbles, a medal on a ribbon, etc.  Totally charming (and yes, we were digging paper hearts out from under the chairs for days).

(Sorry about the blurry photos.  It’s difficult to photograph kids when they won’t hold still.)

Then we played “Chase the Bee,” which is a game I had never heard of, mainly because Eleanor made it up.  She had drawn a picture of a bumblebee on a piece of pink (of course) paper, and tied it to the end of a long string.  To play she shouted, “okay, Katie, chase the bee!” and ran around the house, trailing the “bee” behind her like a kite.  You’ve got to hand it to her for innovation, I guess. 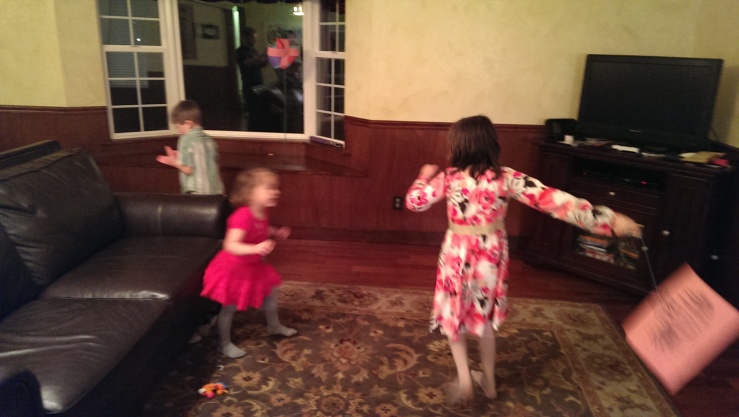 Then we broke apart an intentionally weak-structured pinata.  It was a pinata designed for a toddler wielding a felt lightsaber, but there was enough candy inside for about 15 children, not the 4 on hand.  Sugar rush for sure.  I think I audibly gasped when it all came pouring out. 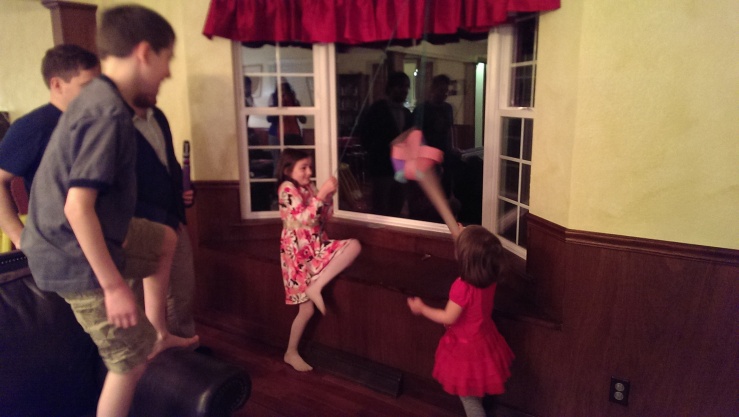 I love this little baby elephant that is Katie.  She is such a sweet, spunky little thing.  It’s great to have a three year old, and even greater to have two great sisters in my family.