Brian and I had planned for years to take some kind of special trip to celebrate the end of the M.D./Ph.D/residency/fellowship slog. Something far away, without kids.

. . . we decided to take a trip to Italy. (That’s the Alps in the above photo.) It was either this, or Japan, and we decided that Italian was a lot easier to learn than Japanese. Ha! Fooled you! We attempted to learn Italian but never had the time. Fortunately, with my high school French and Brian’s rusty Spanish, we figured we could bluff and cognate our way through. Plus, we had our trusty copy of Rick Steves’ Italy at hand, which we referenced as fervently as the Bible. We could manage our way around, right?

Or to at least walk around in circles our first day in Venice. Hey, we managed to get on the airport shuttle to the train station okay. And then on the vaporetto (water bus) without any incident. (Except I had forgotten how that whole “standing in line” instinct isn’t as strong in Italy. Time to be more ruthless with my crowd-surging!)

The first vaporetto ride down the Grand Canal was lucky — we were able to squeeze in the open-air seats in the back.

Venezia is easy to appreciate — the beautiful architecture gave me a false sense of my photographic skills — but ho boy, disorienting.  On that first day, we were forcing ourselves to stay awake until at least 8:30 p.m., which didn’t help. (Our waiter at the restaurant that first night kept offering us coffee, since we were visibly drooping into our food.)

I had read about how “there are no roads” in Venice, but I didn’t fully comprehend what that meant: the islands are so heavily built up that it’s just little alleyways and footpaths squeezed in between for walking. And yes, canals.

The full implications of this means: no north-south directions, landmarks that disappear and then reappear in places you don’t expect, dead ends and bridges that you can see but somehow can’t make your way towards. Google Maps was nearly useless. Shop owners must be bombarded with “where am I?” questions because they would often display maps of the city in front windows, with a giant “You are Here” arrow.

What I also hadn’t comprehended was how insanely touristy this place is. The local population has halved in the last 20 years; there are only some 50,000 people that live in the old city, and pretty much all of them work in the tourist trade (on average, there are 200,000 tourists in Venice during the peak April-October season). It felt more like Colonial Williamsburg than a real city. 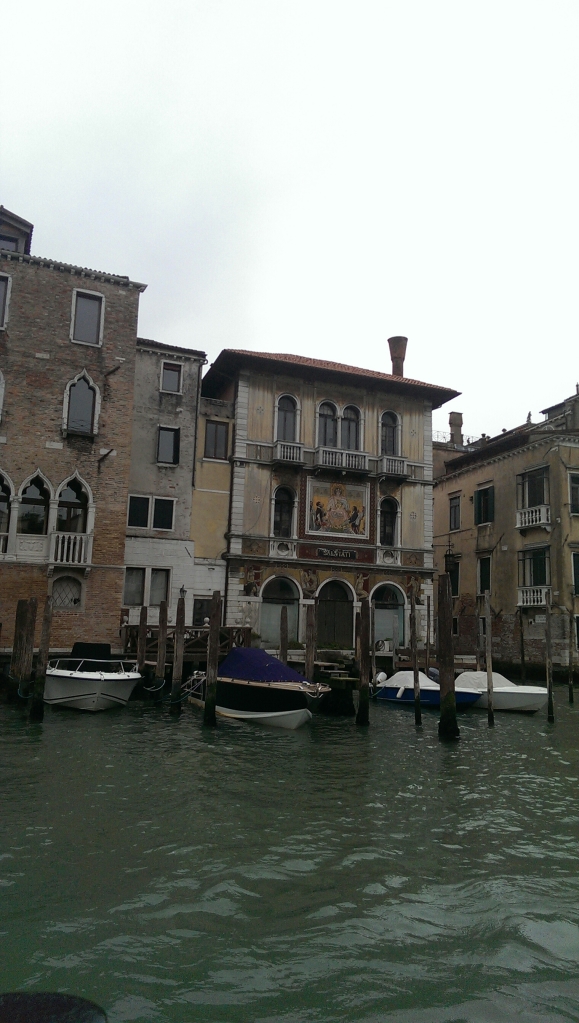 And yet the history of the place fascinated me. It’s really difficult to comprehend the reality of Venice: where a group of swampy islands in a sheltered lagoon — where fresh water is scarce and all food must be imported — would be the ideal place to set up an empire that reigned supreme in Europe for 400 years. (How scarce was the fresh water? Before plumbing, all of it had to be collected in rainwater cisterns like this one:

The water drains through holes in the piazza, then is filtered through a layer of sand to purify it before being drawn up through the cistern. There were laws on the books to prevent water waste: aristocrats were only allowed to wash their heavy Renaissance-era clothes on one designated day a year, and that had to happen off-island.

I suppose the real lesson to be taken away from Venice is this: if you want to have a super-powerful empire, then it’s important to have a kickin’ city mascot. Which Venice certainly does: a winged lion holding a book.  You can see it over the door of the Basilica de San Marco:

This lion pops up pretty much everywhere in the city. The words on the book say “Peace be unto you, Mark my Evangelist” in Latin, referencing the prophecy made to St. Mark in the Bible that he would find eternal rest. Since the bones of St. Mark are considered to be in Venice’s main cathedral (aforementioned basilica) then Venice gets to say that it is the city that fulfills the Biblical prophecy.

But back to the travelogue. This where we stayed: the Hotel Locanda Silva. We were lucky enough to get a room with a view of the canal. 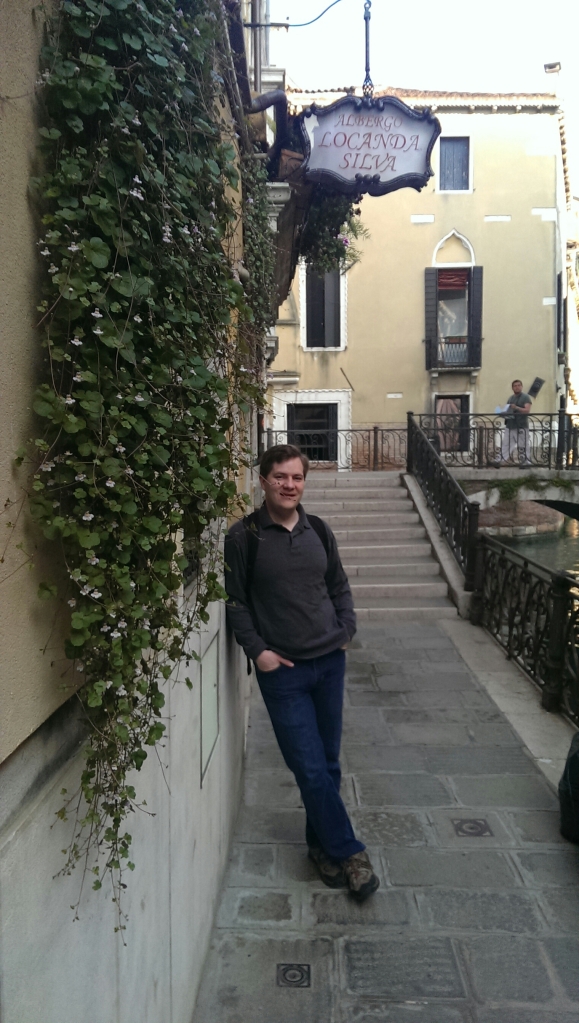 The canal intersection was a popular route for people taking gondola rides, and we would often hear the gondoliers calling out as they turned a blind corner. It was fun to stand on the bridge and watch them go by, one after another. Alas, the romantic image of solitude with a loved one in a gondola is a fantasy: seeing the boats drift by one after the other was more like the log flume ride at an amusement park. (I was still impressed by the one-oared skill of gondoliers.) We didn’t bother taking a ride ourselves.

During one afternoon, we saw a gondola with a wedding party aboard — bride and groom plus in-laws. Cute.