One of my goals for this summer is to visit all the unusual playgrounds in the Seattle area.

On Memorial Day, we went to the Beacon Hill playground, which has slides built into the side of a hill, and two long, fabulous zip lines:

Plus, a great place for Katie to show off her outfit:

I was also a fan of this loopy red statue:

In early June I had the chance to take the kids to the new “Artists at Play” playground at Seattle Center. It’s certainly the tallest playground I’ve ever seen. A giant web of ropes lead to the tops of twenty foot slides.

Plus, there was this basket swing:

And a painted labyrinth on the ground. William insisted on doggedly walking the whole thing without skipping over any of the lines. When I asked him to move closer to me so I could take a photo, I had to wait for him to sloooooowly work his way around.

THEN we made another visit to the “castle” playground at St. Edwards’ State Park. I mean the castle itself is pretty great:

But what the kids were really interested this time around was the giant weeping willow tree. Eleanor and William climbed on it for a good hour. 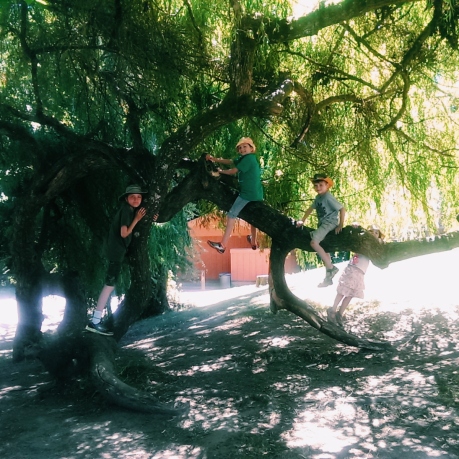 This week, however, we decided to travel a little further afield. I’ve been meaning to get to the “adventure playground” on Mercer Island for years. It’s only open on Tuesdays and Thursdays from 1-4.

If you don’t know what an adventure playground, let me explain it for you. It’s based on the idea that kids need “junkyard” play, a place to build forts and roam around and be a little wild.

Our adventure playground is a fenced-off section of forest with a giant pile of lumber at the entrance. Kids can check out boxes of real tools, then go build whatever they want in the forest.

I let my kids work on their own for a while. The only thing they managed to build was a good argument. So I stepped in.

After a lot of hammering and dragging giant pieces of wood through the . . . woods, we managed to build this thing:

Yeah, it doesn’t look like much, but it isn’t going to fall down. The kids like the fact that they can climb the “lookout ladder” at the back. I tried to convince them to use the big pile of sticks in the background to cover the front of the fort, but they weren’t interested.

William, however, was very interested in using the sticks to cover the “rat trap” he had dug.

Katie was very fond of the safety glasses. “I look like a grandma with glasses on!”

Although the drive home was brutal (we left at rush-hour, so it took forever), we totally want to go back again. One of the playground rules is that you aren’t allowed to tear any of the structures down. I’m curious to see if our fort is still there next time . . . or if someone has added on to it!