We’ve had a lot of dressing up and performing over the last week.

First, Jeff spent the week attending a week-long “Shakespeare, Combat & Comedy” camp. He and his classmates rehearsed and performed a 30-minute version of “As You Like It,” and Jeffrey was . . . Lord #2 and the Holy Man. What, you’ve never heard of those characters? Well . . .

See, he specifically requested a part with as few lines as possible because he didn’t want the bother of having a big part in the play.

This is pretty much the opposite of me at age 12.

The other half of the camp was spent learning “real stage combat” from the official, certified combat master from the Seattle Shakespeare Company. Our week was spent with Jeff pretending to fake-pull our hair and take a lot of fake punches. The end-of-camp showcase featured Jeff and a classmate “fighting” with the use of some random props. Many fake punches were had.

It’s a fun coincidence that “As You Like It” was the play Jeff studied, because not only are we studying that play right now as part of our morning “Shakespeare Time,” but all the youth in our ward are going to a public performance of the play in the park this Wednesday. Rosalind’s popping up all over.

But that’s not all! We also had MOOOORE of the Bard at the Seattle Outdoor Theatre Festival this weekend. We saw an hour-long production of “Hamlet” (“which is just as long as ‘Hamlet’ needs to be,” my friend Margaret said) and then an original play that combined a lot of Hans Christian Andersen fairytales.

The second production was also an hour, but unfortunately felt much longer. (I struggled to stay awake.)

In other costuming news, we also attended our neighborhood’s ice cream social this week, and once again the face painting was on point:

Katie LOVED being a tiger. She spent the remainder of the evening jumping out and growling at anyone who crossed her path.

ELEANOR: I’m a butterfly because I like to fly! 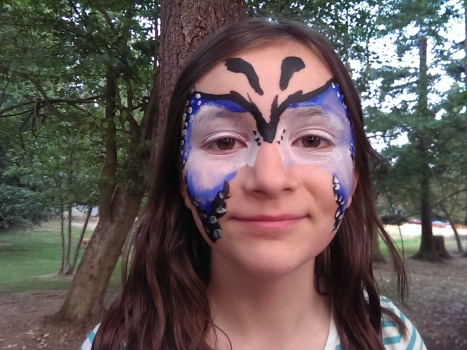 KATIE: I’m a tiger because I like to KILL!

Meanwhile, I spent my time at the ice cream social introducing myself as a member of the library board and handed out library swag like silly straws and sticky-note pads. The idea is to spread awareness of the existence of the library board. For a shrinking violet like me, this was nerve-wracking, but I DID IT, and MANY A SILLY STRAW WAS STREWN.