This week we accomplished a Seattle summer tradition: an afternoon splashing in the waves on Jetty Island.

The island is a two-mile long manmade island in Puget Sound just west of Everett. It was built as part of an attempt to turn the bay there into a freshwater bay. Shiploads of silt were dug up and dumped in a row, and over time more silt collected on the island’s edges. This means that the beach is a true sandy beach, and the water is very shallow, so much that the water is warm enough to splash in. This is not the case for most Puget Sound beaches. 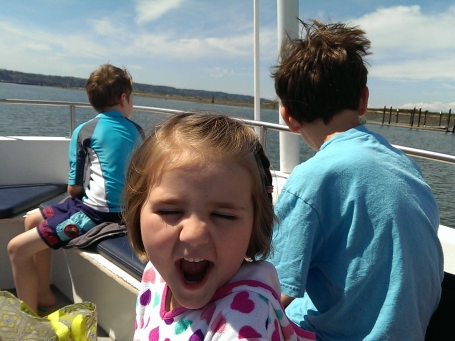 The reason why we haven’t been there before (and aren’t there every day) is that the only way onto the island is by a walk-on ferry run by the city of Everett. You can only make a ferry reservation if you have a group of eight people, so it takes some coordinating to schlep over there, and you need flexibility in your plans in case all the ferry times are already booked.

The island functions as a wildlife preserve now. There is no electricity or running water on the island, and the only vent toilets are next to the ferry dock, so you have to plan ahead. But if you take the trouble, the island is loads of fun, a real beach!

We had so much fun that I pretty much forgot to take any pictures besides these random snaps. We were lucky enough to travel with a bunch of friends from church, and Eleanor was overjoyed to see several friends her age. She’s been having a tough time at home lately, and often sulks when she grows tired of her siblings.

I realized my lack of picture-taking when we got back to the parking lot. So, we posed on top of this whale tail statue. Ta-dah.