Our first “summer camp” coincided with the last week of school this year. William and Eleanor auditioned for the annual theatre production produced by the Missoula Children’s Theater, and got in — but all the rehearsals were during the last week of school. The play is sponsored by the Shoreline Arts Council (the performance of the play is done as part of the Shoreline Arts Festival), hence the lack of coordination with the school district.

The play this year was “The Frog Prince,” with extra moral lessons about Friendship and Being Yourself and a million extra small parts added including an anthropomorphic aspen tree that only speaks in rhyme.

Eleanor was Flamingo #8 — part of a troupe of flamingos that also know how to flamenco — and William was a Turtle. He was so excited about his part.

WILLIAM: Mom! I got into the play! And I get to have a SOLO!”

ME: What, you get to sing a song onstage?

WILLIAM: No, I get to say a line! All by myself!

Yes, just the one line, but for a boy who as always been part of the faceless chorus, this was a big deal. His “solo” was to walk slowly forward, and then say “What’s the rush?”

But unfortunately, his costume didn’t fit him properly and he could not stop squirming the entire time he was onstage. Ah, theatre.

Jeff missed the performance because he was off doing his First Real Backpacking Trip with the Boy Scouts. They hiked 9 miles and camped on the shores of Ross Lake. Even though we taught Jeff how to use his little backpacking stove, he was nervous about it and therefore ate nothing but beef jerky and dry ramen (dry! ramen!).

Because of all this busy activity, we didn’t get to do our traditional last-day-of-school activities until the following Monday. Namely, eating way too much sugar at Menchie’s: 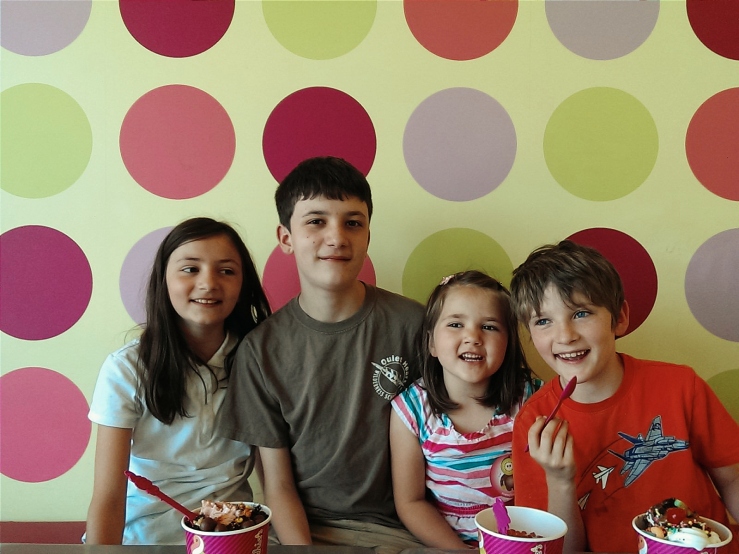 Followed by a trip to the grocery store to pick out Summer Cereal. When Brian came home that evening, he took a look at the four sugary cereals on the counter and guessed which child picked which cereal. He was correct on all counts. Can you do the same?

I would also like to add here that French Toast Crunch is the cutest little miniature toast cereal ever. Makes me almost not-sad that my favorite website, The Toast, closed down this week. (With a sign-off from Hillary Clinton! Never have I been pandered to so effectively.)

The kids didn’t have much time to munch on their cereal because we took off for Utah the following Friday (which is where I am now).

The only remarkable thing about the drive here is that we needed to make an emergency bathroom stop, and the only place we could find at the time was the Chamber of Commerce building for the tiny town of Glen’s Ferry, Idaho. The volunteer working the desk said we were lucky they were even open that day.

And then she gave us all free lollipops, pins shaped like potatoes, and happily marked down in her ledger that the CoC had six visitors that day. Also, half of the postcards for sale there were of places in Utah. And when I wanted to buy one of the interesting mural in Glen’s Ferry, she said, “But did you see the one with the train? That train one is so lovely, it shows how we have the desert and the farmland here,” and she was so bursting with hometown pride that I am now the owner of a very boring postcard of a train going through a field.

Also, the mirror in the bathroom was made of a horse yoke thing:

And there were benches made of wagon wheels outside. My mom’s response to this story was “That is so Idaho,” but come on, Mom. You know the Syracuse Historical Museum is basically the same thing.

We’ve had a happy couple of days here in West Point so far. My mom made a tipi for the kids to play with, and the fairy garden is bursting with little figurines and play houses.

Best of all, we were able to “kidnap” Sol and Joseph, who moved away from our neighborhood and moved to Utah a few weeks ago. Jeff and William have been missing their best buddies, and relished playing Edge of the Empire all day.

I even got to visit Danielle in the evening and take a spin on her new baby grand Baldwin. It sounds so great! My performance of the 3rd movement of “Waldstein” was terrible, but hey! I know how to play it now! (More on that later.)