I’ve noticed that we’ve fallen into a pattern these last few years. During the odd-year summers, we visit Yellowstone; during the evens we attend the Utah Shakespeare Festival. As traditions go, it ain’t so bad.

This year was a Shakespeare year. But before we headed down to Cedar City, we spent some more time with the Neweys in West Point.

Specifically, the rockin’ 4th of July festivities of West Point. Oh, how I love that small-town parade.

Horses and antique tractors and a million little girls in sparkly leotards with their jazz dance teams! Since Katie refers to this holiday as “America Day,” my dad kept hollering “HAPPY AMERICA DAY!” at the people throwing candy. Hence, we scored about 8 lbs. of saltwater taffy, plus several frisbees and a t-shirt. 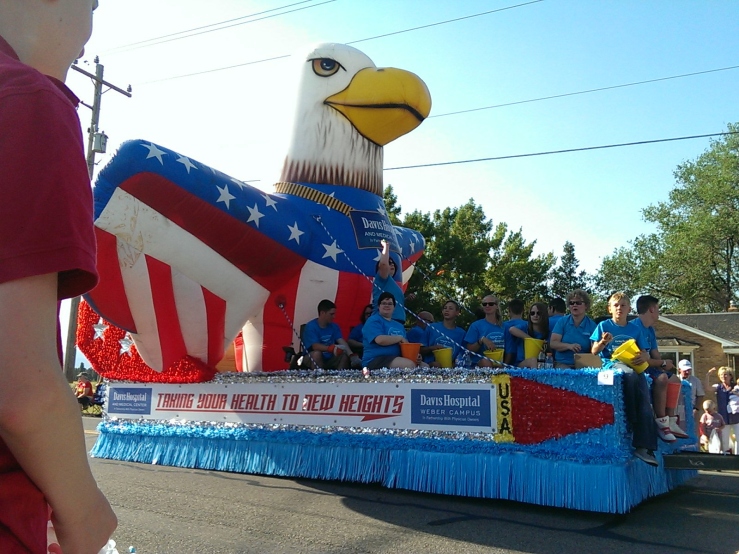 My dad also hollered “HEY WATER! RIGHT HERE!” at the people on the floats holding squirt guns. Not quite as amusing (buuuuuut I will admit the cool water did feel nice in the hot sun).

The rest of the day was spent watching “Finding Dory,” then gorging on burgers & baked beans, then collapsing in a nappinh heap while the children watched “Voltron: Legendary Defender,” and then groggily collecting ourselves together to watch fireworks.

Poor Katie! She had been looking forward to America Day for weeks, but then took sick when it finally arrived. We let her come to the fireworks display anyway, although she spent most of it curled on a blanket with Huggy Bear.

Pat was visiting with his daughters for the weekend, and glorious Cousin Times were had by all.

Katie wasn’t sick for all of the Cousin Times. She and Emmy played for a long time together in the fairy garden:

The only downside to the holiday (besides Katie’s illness) was the unfortunate fact that Utah has legalized arial fireworks. It was like the friggin’ Battle of Antietam all night long. When we left the West Point fireworks, we discovered that idiots had set off smoke bombs in the parking lot. One of them set a patch of nearby dry brush on fire, but fortunately Brian and another man were able to stomp them out before it grew into a wildfire.

July 5 was a Salt Lake kind of day. We began with a picnic lunch at Silver Lake, at the top of Big Cottonwood Canyon. Katie was still feeling a little under the weather, so she insisted on carrying a bucket around the trail with her, “in case I get sick again.” We got lucky and saw two moose!

This was followed up by a visit to Banbury Cross Bakery:

and then a turn through Gilgal Gardens. My mom (who had come along for the day) had never visited this wonderfully odd collection of “outsider art.” We had to rectify that immediately.

By this time we were parched from the heat and still had 3 hours to go until we were to meet our friends for dinner. My mom voted that we head down to the City Creek Center to hang out at the Disney Store. Who am I to resist that? (No photo evidence of that part of the trip, but everyone walked away with Tsum Tsums. Which meant we had to carefully keep track of Tsum Tsums for the remainder of the trip.)

Our final stop in Salt Lake was at the Seven Canyons Fountain. It had been two years since we had visited this place, and I was a little dismayed to see that my older kids didn’t play on the water structures in quite the same way they had before.

Jeff and Eleanor were far more inhibited and at a loss for what to do at first. I had to keep making suggestions for how they should play (“try making a dam in one of the water streams”). But eventually all our Plethora friends arrived and they got along as well as they always have.

We had a fabulous picnic with various Pleth people until it began to get too dark and nearly all the other park patrons went home. It was a devil of a time getting the kids out of the water. But the lure of the next grandma’s house did the trick.