My parents decided to spend their Spring Break with me this year. It was a delightful surprise, since their original plans were to take a cruise to Alaska this summer.

You hear that, Alaska? I totally beat you.

This, of course, meant that extra effort was needed to show off Seattle in all its springtime glory. This was pretty easy considering that the cherry blossoms at UW hit their peak this week.

Bask! Bask in the petal snow! 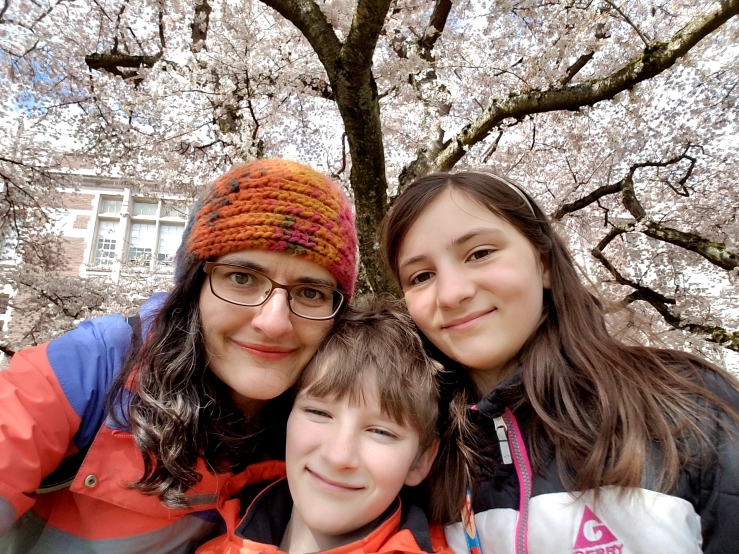 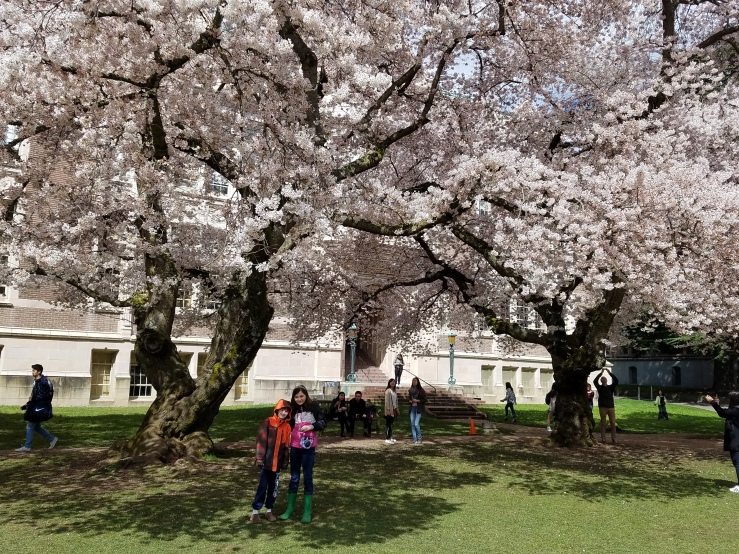 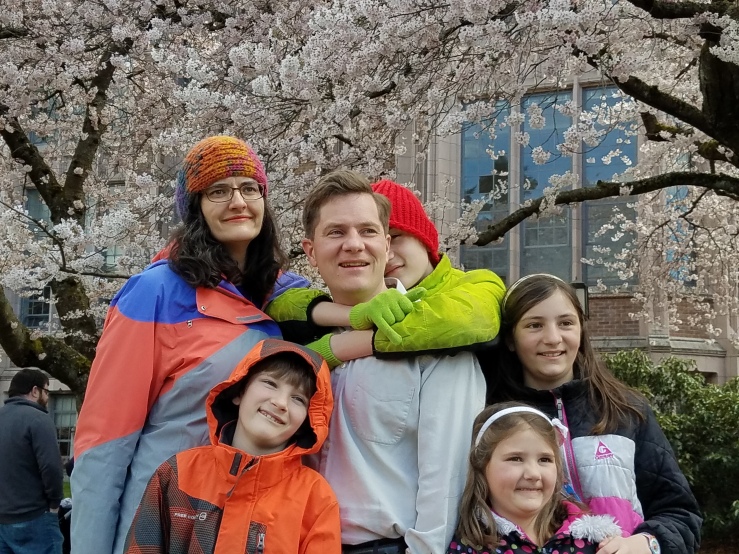 If you’re wondering why the kids are with us, it’s because the school district had a non-student day on Monday. My parents were happy to have a grandchild day right off the bat.

We also took time visiting the Burke Museum of Natural History (this actually happened before the blossoms). It was odd — I’d never realized that my parents hadn’t ever visited the UW campus before. Well, we can check that off the list now.

The best thing we did at the Burke was take turns “flying” in front of this bird mural. 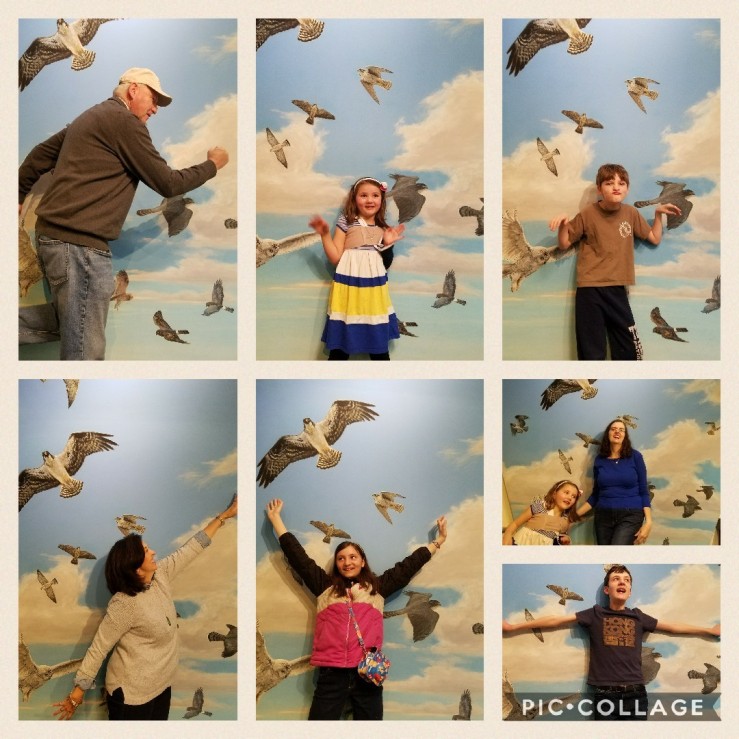 We also bought the kids giant apple fritters at the Burke cafe. Have I mentioned how much I love the Burke cafe with its genteel wood paneled walls and paintings and stone fireplace? I’m going to miss it when the new museum is built.

We were starving by the time the cherry blossom time was over (sooooo many multi-generational Japanese-American families! It was adorable!) so I decided to share another Seattle cultural institution and take them to Dick’s Drive-In for lunch.

I warned my parents that the burgers were mediocre, and the fries a travesty. They were happy that I gave them such a warning, because they absolutely agreed with me. I describe Dick’s food as “the best thing to eat for someone who’s been out drinking all night,” and I stand by that. And yet — and yet — there was still multiple long lines of people at the windows! Seattle, I just don’t get you on this one.

After lunch we headed to the Seattle Japanese Garden. I was hoping to see more cherry blossoms, but no luck there. It was still a lovely place to explore. My kids always enjoy going around and around on all the little pathways. Jeff took time to read the self-guided-tour brochure as he scooted around, which I found charming.

Yeah, once we returned home we all collapsed on couches. Oh, and Katie lost a tooth! Her very first. She took time to write a note to the Tooth Fairy, asking her to please leave money but please also leave her tooth behind. I understand — when one of your body parts spontaneously falls off, it’s understandable to not want it carted off in the night by a stranger with supernatural powers. Even if they offer you a cash bribe.

Tuesday morning was spent here at the orthopedics clinic at Children’s Hospital.

I am totally impressed by this place. Beautiful facility, great security, streamlined check-in process. We were only in the waiting room for 30 seconds before Katie was called back to the “casting room,” meaning where you “get casted,” or have a cast put on your broken bones. Orthopedists use the verb “to cast” in their own special way, I’ve learned.

The great thing is that Katie now has an efficient Velcro-strap mini sling which will stay in its darn place without needing me to readjust it every 30 darn seconds.

Once Katie was checked back into school, I took Mom and Dad to the place they always want to go when they come to Seattle: to get bibimbap from the Korean restaurant in the Uwajimaya food court in the International District.

I mentioned this to the guy running the counter at the restaurant, and he was so pleased that he gave us free kimchi. So, thanks Mom and Dad for your consistently dependable tastes in food!

That evening was Astronomy Night at one of the local high schools, and my mom and I took the three younger kids to check it out. I love going to this activity because it’s intended for young children, but hardly any little kids actually go. This year it was organized by one of the youth volunteers from the Library Board, so I was happy to support her. She did a great job!The high school students manning the activity booths are therefore usually very pleased to see my family. 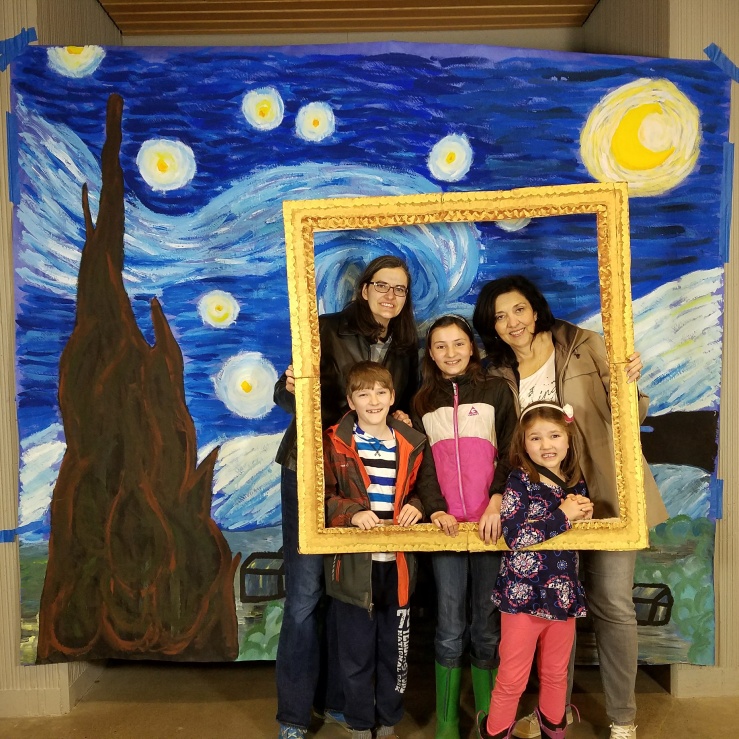 We made planets out of styrofoam balls and old CDs, snagged some free solar eclipse glasses, watched a presentation in the inflatable planetarium, and played an astronomy trivia game against a bunch of teenagers.

William and I were on the same team (“Team FloppyFish”) for the trivia game, and we TOTALLY SCHOOLED everyone. Yes, I do know how many moons Jupiter has, thank you very much.

I needed some office time/errand-running time the next day, so after sending out a bushel of e-mails and phone calls, my parents headed up to Lynnwood with me for an Old Navy/Target run. I bought new clothes for myself for the first time in ever. I’ve lost 40 pounds since Labor Day so the experience was happily un-fraught with the usual anxieties. Yay!

That evening Jeff was awarded his promotion to Star Scout at the Green & Gold Banquet. Brian was also given a surprise award for his volunteer work as YM president, which was very kind.

My dad picked out our Thursday activity, and he picked a good one: touring the Boeing airplane plant up in Everett. I’ve always wanted to do this! It was so cool! It was like watching the assembly of a fifty-million-piece LEGO set. 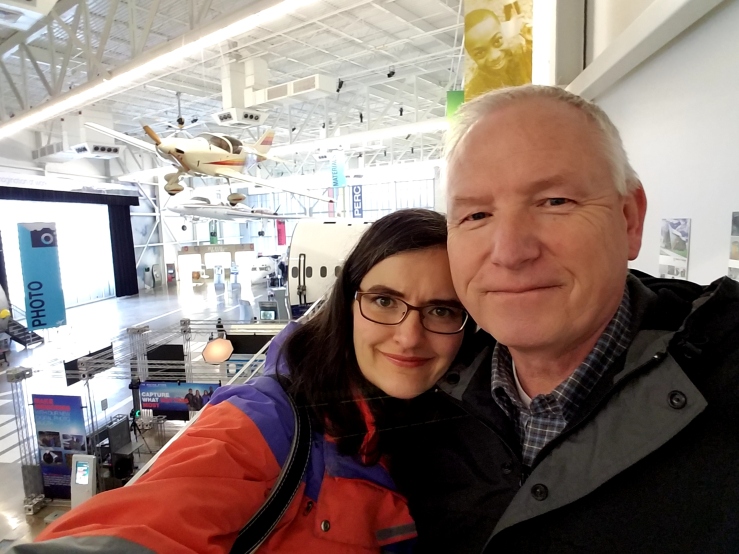 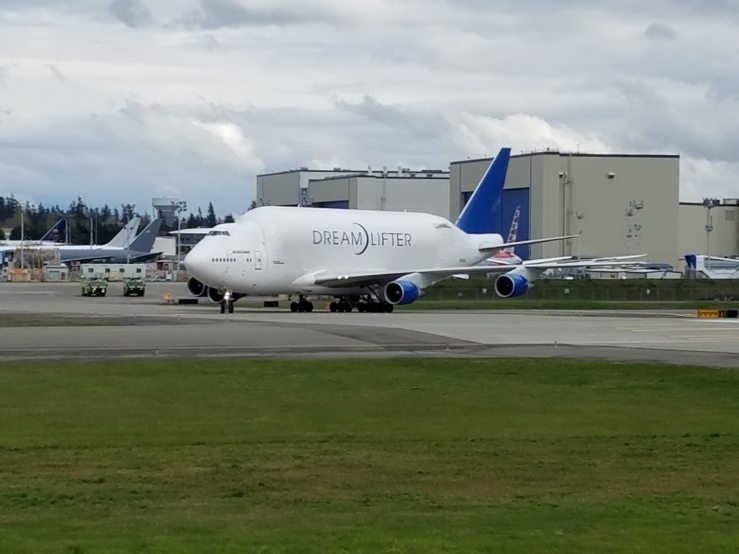 Boeing doesn’t allow any pictures to be taken on the tour (not for fear of corporate espionage, but because tourists have a history of dropping phones and cameras down on the factory floor) but I found this one on the internet: 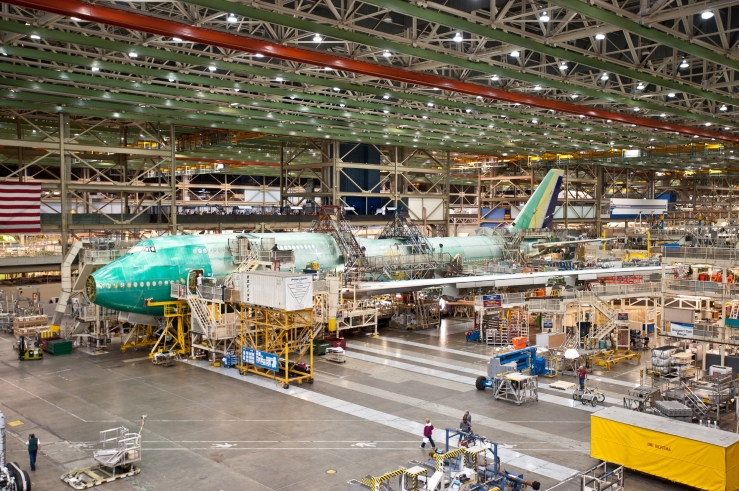 We spent a long time that evening watching “Put Together Quick” time-lapse videos of airplane construction. It was so fascinating — just the sheer amount of engineering, planning and coordination between thousands of people to make these machines come together boggles my mind.

On my parents’ last day in town, we headed up to the Skagit Valley Tulip Festival to see if there were any blooms in the fields. Well . . . there were some. We were a little on the early side for tulips, but there were some. And the daffodils: whoa. 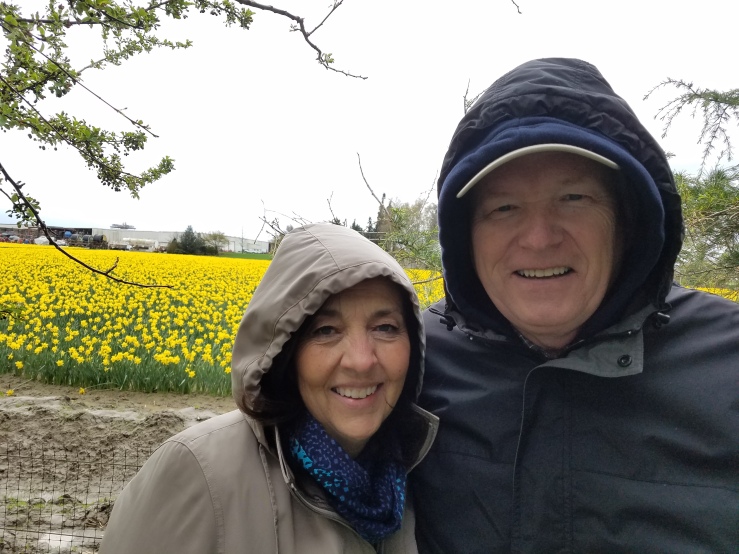 After the gardens, we drove up to Edison. I recently read that there was a really good Mexican taqueria there, and a legendary bakery. It was totally worth the extra bit of a drive. This is the best Mexican food I’ve had since moving to WA state. 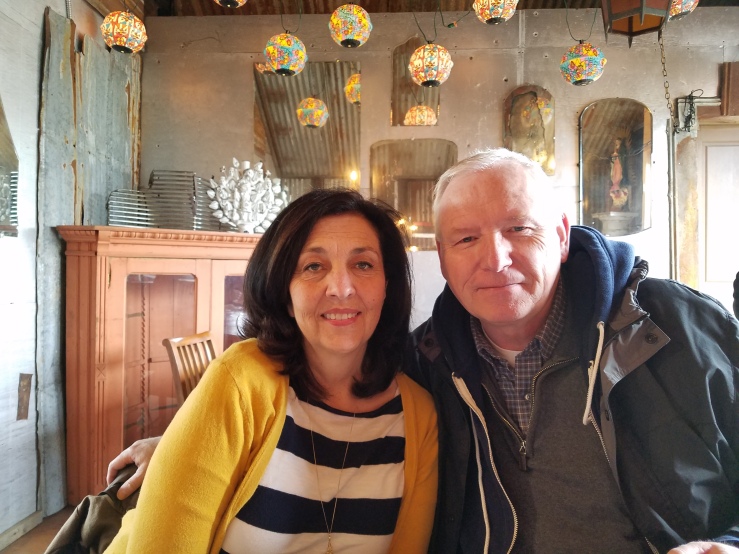 And the bakery! OMGosh, I’d read about Breadfarm in magazines and in my friends’ Instagram accounts, and it still managed to exceed my expectations. A little on the pricey side (seriously, $1 for a tiny cookie?) but such high quality. 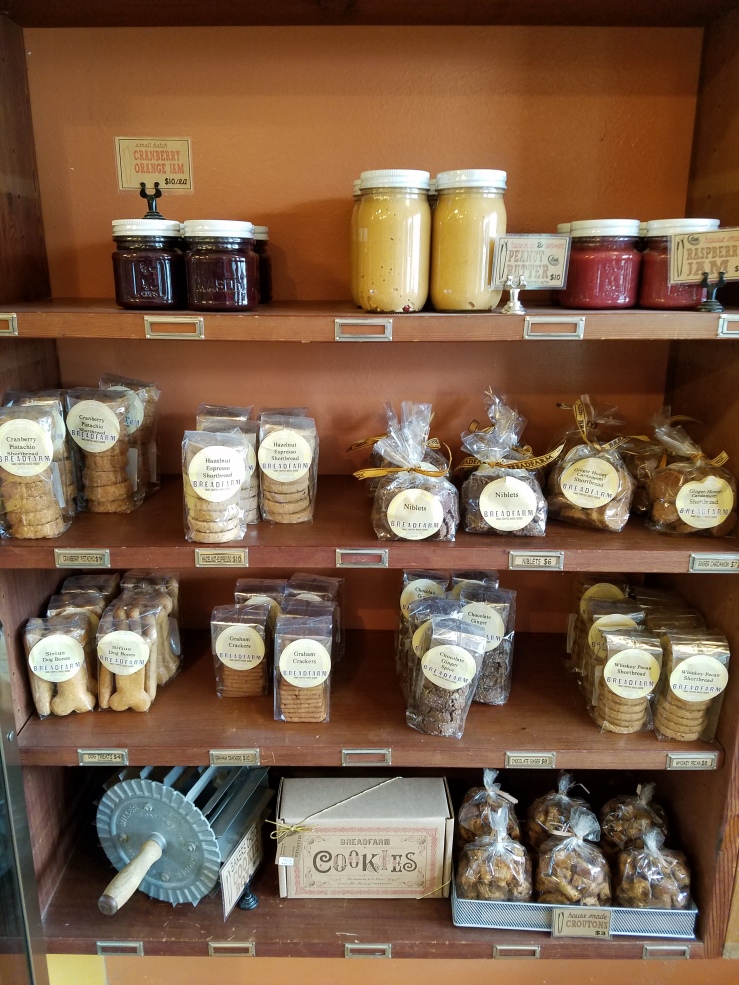 I bought a package of their homemade graham crackers (since I’d read that this is what they were famous for). They looked like little unassuming brown squares but tasted like crispy wafers of spiced butter.

I intended to just have a couple and share the rest, but instead I merely shared 10 of them and ate the remaining 15 by myself because CARPE DIEM, PEOPLE.

Lastly, on Friday evening my parents were real troopers and came along to watch the Pinewood Derby. Eleanor, William, and Katie all had cars to enter into the competition. We once again had the professional derby-runners getting the show going for us (it goes so much faster it’s wonderful). The decorations were so cute this year!

And amazingly enough, I didn’t get any pictures of my parents at the Derby, which is a shame because they went back home early the next day. But it was a wonderful trip, and I hope they can make it back up to see us sometime soon in the future!