My 40th birthday came and went this week. I wanted to do something on the big side (or at least bigger side) to celebrate.

Four decades! It seems more impressive than it feels.

So, I decided to throw my friends and their kids a dance party. This was a bit of a big swing for me. I’ve held many, many gatherings over they years, and I don’t think I’ve felt quite as much anxiety as I have over this one. What if nobody danced? What if everyone just stood around and stared at each other? Or worse, stood around and stared at me while I danced awkwardly by myself?

But fortunately, none of that happened, although I danced pretty much every single song in a row in order to try and keep things happening. It went pretty well, if I do say so myself.

Plus, I also had a keg of gourmet root beer on hand so people could have all the floats they wanted. (It held 20 liters. When the party was over, we drained the leftovers into empty bottles and found that the crowd drank 15, wow.)

I made my own playlist using YouTube videos, which we streamed onto our television via the Chromecast. The disco light from Eleanor’s birthday party was back on the ceiling, and, well . . . 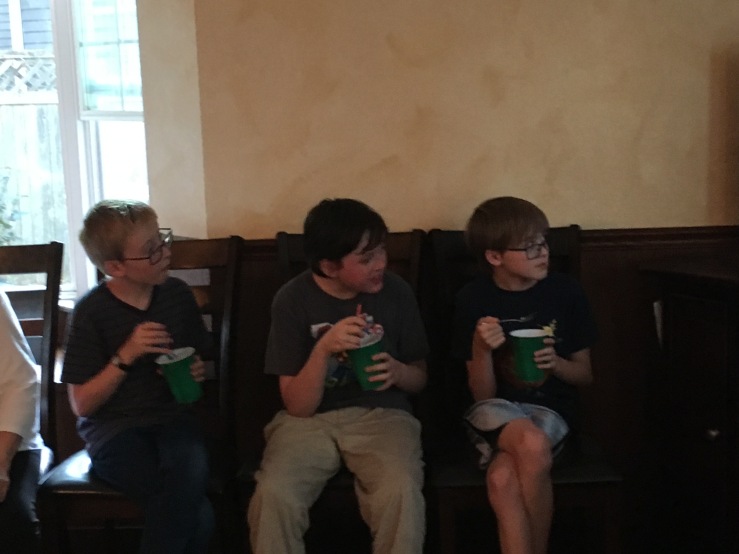 It looks pretty awesome, right? I was lucky enough to have a passel of extroverts show up, so all the old warhorse dance moves got pulled out. A conga line, the Macarena, Electric Slide, and even the horse-riding bits for Gangnam Style.

(By the way, there is nothing in this world like standing next to your stake president and his wife in the middle of your dance party and seeing their faces as they dance to the Gangnam Style music video for the very first time.)

Tips for next time: when I made my playlist, I kind of randomly threw together a bunch of songs that were all danceable, some well known, others not. If I were to do this again, I’d choose only the familiar songs. My guests felt more comfortable dancing to the songs they already knew.

No matter how much I love “Let’s Dance to Joy Division” by the Wombats, it caused pretty much everybody to come to a standstill and scratch their heads. “What’s this song?”

Also, sometimes the music video for a song was so outlandish that it proved a big distraction. On the other hand, if a video included the lyrics to a song, it often inspired everyone to sing along.

All the old dusty classics made everyone very happy. The groans and cheers of pleasure when “Livin’ on a Prayer” came up on the playlist was worth every penny. Soon people took turns trying to guess which decade the next song would be from.

If I were to do it again, I’d add things like the Bunny Hop or the Chicken Dance. They are corny, but are a great way for people who don’t feel confident about dancing to join in and feel like they are part of the group.

(Oh! We should have done the Virginia Reel!)

At the end of the set, everyone was, ah, shall we say . . .glowing . . . and likely slept very well that night. We had to open every single window and door on the first floor. At its peak, there were 35 people dancing at my house.

Anyway, it was a wonderful way to kick off what has become the best days of my life. Seriously — I no longer suffer the social awkwardness and anxiety of my twenties, or the lingering depression (and lack of autonomy caused by rearing toddlers) of my thirties. I have so many friends it astounds me! And an incredible family who is pretty darn fine if I do say so myself. I have the freedom to spend my time on the work and projects that I choose, and to go where I wish. A big house full of too many “books, socks, and the little wheels off things” (as Shirley Jackson would say). The luxury of time to exercise and have a healthy body. I get to live in an interesting city in one of the most beautiful parts of the country. How on earth did I get here?

Here’s to hoping the next few years are just as fine as this one.

MY BIRTHDAY PLAYLIST, FOR THE HISTORICAL RECORD:

Rock the Casbah – The Clash

Rock With You – Michael Jackson

Fly Me to the Moon – Frank Sinatra

Don’t Stop Til You Get Enough – Michael Jackson

Livin’ on a Prayer – Bon Jovi

Dancing in the Streets – Martha and the Vandellas

You Spin Me Round (Like a Record) – Dead or Alive

I Want You Back – The Jackson 5

You Shook Me All Night Long – AC/DC

Nobody Really Cares If You Don’t Go to the Party – Courtney Barnett* (at this point, I had learned my lesson about obscure songs and skipped this one. All other songs with * were ones we skipped, mainly for time because it was past 9:00 p.m. at this point, and little kids needed to get to bed)

Get Down Tonight – (KC & The Sunshine Band)

What Does the Fox Say? – Ylvis (this was not part of the original playlist, but Jeff begged me to put it in)

Golden Years – David Bowie (The last song we played that night. It’s my favorite pop song, and I wanted to end with it)

Remainder of Playlist (but which we did not play that night)

Fell in Love With a Girl – The White Stripes

(Don’t worry about these songs at the end, we didn’t ever really think we’d play them, it was a just-in-case measure.)