Last week we were a bunch of homebodies, so this week I decided to make up for it with a series of adventures.

The tricky thing is getting my kids up early enough so we can all get our practicing done before heading on the road. Since my two oldest have morphed into teenagers, it’s a challenge. I miss having breakfast with everyone at the same time, but nowadays the kitchen is a revolving door of mealtimes. I keep finding plates of half-eaten bagels in random places all over the house.

But we did manage to go strawberry picking. It was a perfect sunny day for it (as opposed to last year, when we paid for rainwater along with our berries). You could smell the ripening berries in the air! I loved it. 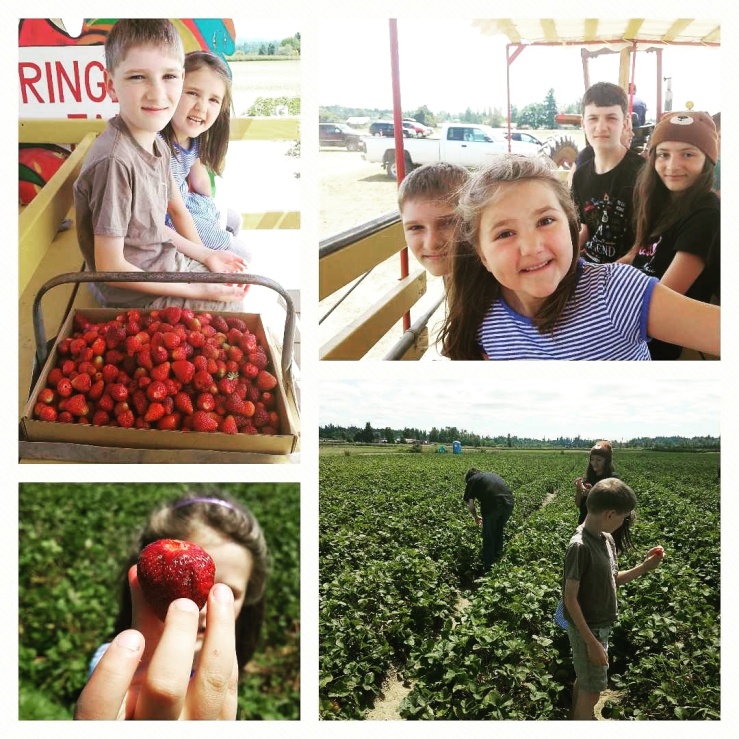 I managed to limit our picking to only 11 lbs. this time around. (And yes, this once again coincided with the arrival of the 25 lb. cherry box Bro. Soumpholphakdy brought us.) 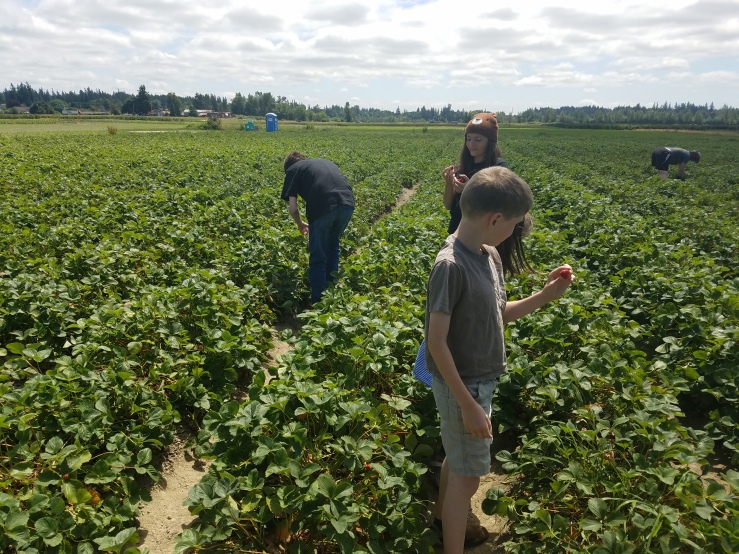 The kids were all cheerful pickers this year. Katie spent her time searching for “The Queen of the Strawberries,” defined as “the biggest berry of all.” When she determined that she’d found the Queen, she then went on a search for the Princess, Prince and even Baby of the Strawberries. Which was darn adorable.

Eleven pounds was just right for making strawberry pie, jam, and enough frozen berries for all the smoothies I want.

BUT — I admit that if I hadn’t gotten my dates mixed up, I’m not sure if I would have gone berry picking that day. For some reason, I had it in mind that July 4th was a Wednesday, not a Tuesday this year. So I thought I had an extra day to cook and process the berries before the holiday. Whoops!

So I was busy cooking barbecue sauce and pressure-cooking ribs alongside the strawberry pie.

This was one of the most delicious cookouts I’ve ever made. Babyback BBQ ribs, pan-fried corn, amazing salads (family and friends brought those). Strawberry pie for dessert, along with this cool dessert-drink I found in a cookbook: cherry sorbet floats made with lemon-thyme lemonade. 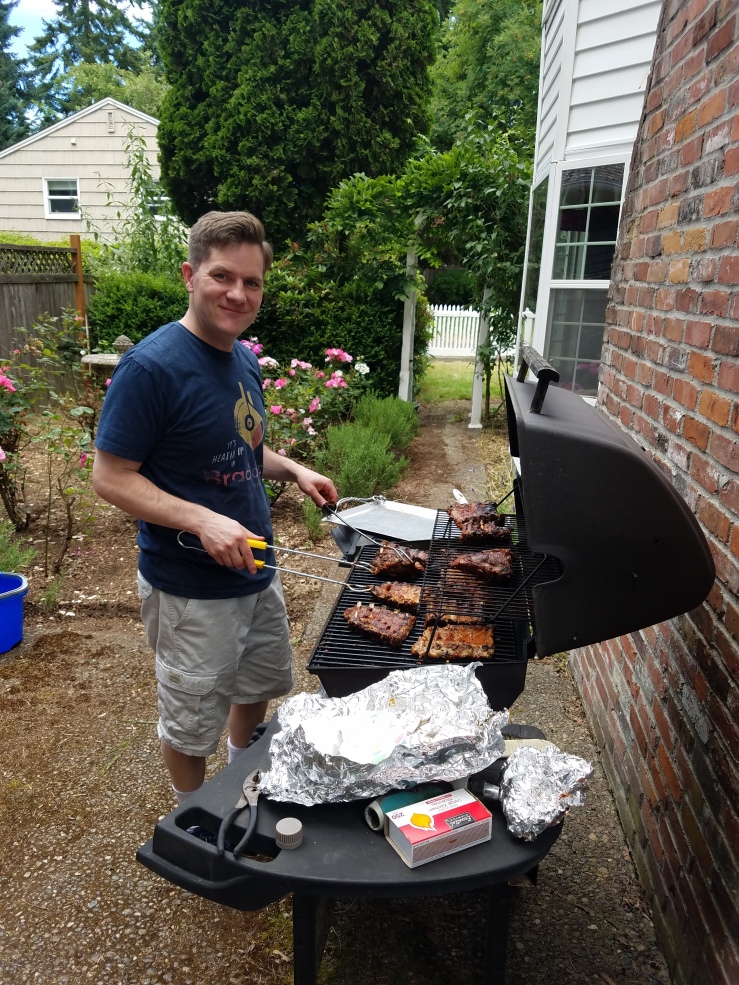 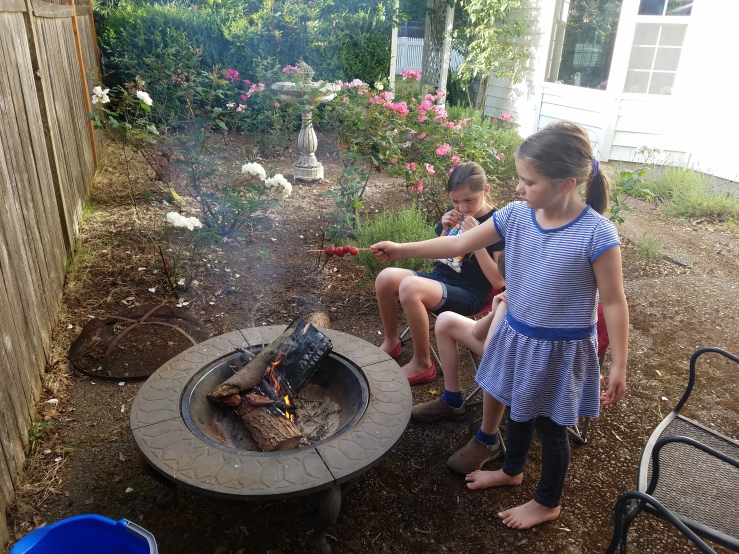 We considered going to the UW hospital to watch the Seattle fireworks out the big windows, but that didn’t seem very July 4th-ish to me. So we went to the same park in Edmonds that we went to last year. It’s juuuuust the right distance away from the show to still hear the popping sounds and a bit of music, but not so loudly that it scares Katie.

The next day we were rewarded for doing chores by going to St. Edwards State Park, where the giant “super playground” is.

But we have a problem with Jeff. He’s in that in-between phase where he towers over other kids, but still young enough that he likes to play. He planned on participating with the other kids, but when he saw that there were a bunch of day-camp groups on the playground, he decided to sit and read a book instead.

Fortunately, I also brought along my book, Issac the Alchemist by Mary Losure. Jeff asked about it (fascinating biography of Issac Newton) and soon I was reading chapter after chapter of it out loud to him. But I still felt sad that he wasn’t playing with the other kids anymore.

But it was still a bummer to leave him behind. In the meanwhile, can I say how impressed I was that Eleanor passed off the swim test with the lifeguard on the first try? William didn’t, so Eleanor was sweet enough to stay in the shallow end so he wouldn’t be lonely with Katie.

(I stayed on a lanai chair and read a book. Heaven.)

FINALLY, on Friday I decided to coordinate our adventure with friends, and we met up with buddies at Lake Sammamish State Park. My friend Melinda, who lives in Bellevue, had talked up the beautiful new playground as an excellent destination for summer play.

I agree with her wholeheartedly (even though she, funnily enough, couldn’t make it what with being on vacation and all). The playground is adorable and beautiful. There’s one of the biggest zip lines I’ve seen on a playground, and the play-houses have little details like tiny fireplaces molded into the wall.

Again, Jeff didn’t quite know what to do with himself, but he enjoyed helping littler kids take rides on the zipline, pushing the merry-go-round as fast as he could manage, and then dozing on the big round accessible swing. 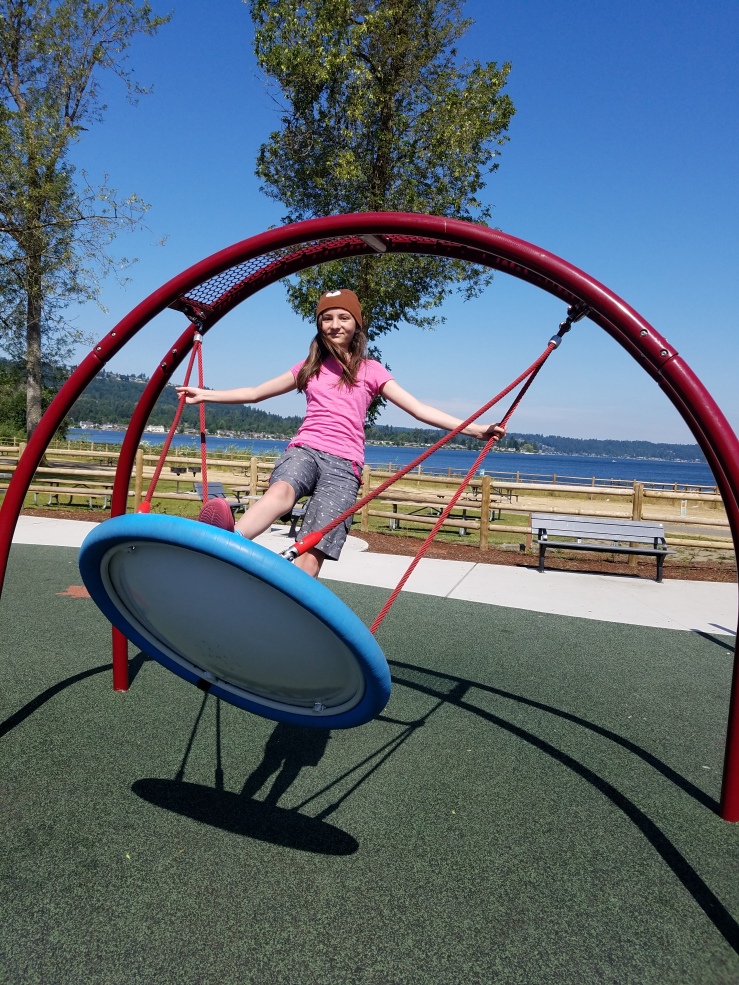 After a picnic lunch, we hit the beach!

What a great spot! The water is so much warmer than Puget Sound, and this swimming beach is nice and shallow. My friends and I waded a bit, then stretched out on the sand to doze and chat while the kids splashed together. As a bonus, the bathhouse is new, with nice clean restrooms for changing clothes. (I brought my swimsuit, but didn’t bother changing once I saw how shallow the water was.)

I know I’ve mentioned before how much I love Jetty Island, but I think I like the beach at Lake Sammamish even more. This summer I can’t muster the energy to plan a Jetty trip. The hassle of dealing with the ferry reservation system, how competitive it is to get tickets, how there’s always the chance you’ll be stranded on-island until evening, and how if the tide is out the water is so far away, drives me crazy. Plus, there’s only one bathroom on Jetty, and it’s on the opposite side of the island from the beach, so bleh.

I think the lake will be our go-to spot from now on. 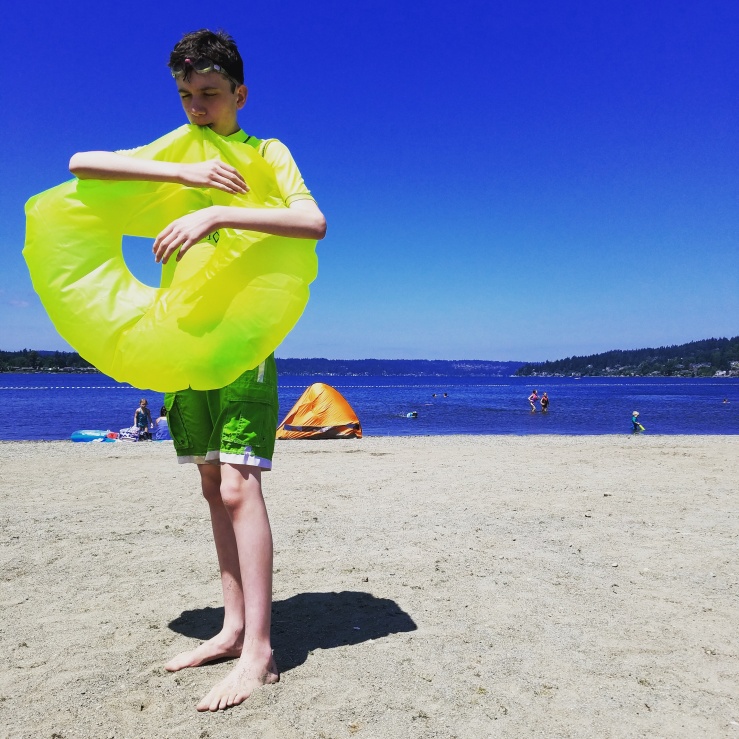 To cap off Adventure Week, the whole family went on a day trip to Tacoma on Saturday.

I’m always telling my friends that Tacoma is a surprisingly fun place to go. In the past, we’ve visited the Museum of Glass and its amazing furnace/workshop, but this time we headed to Point Defiance Park.

. . . and then we went to the Fort Nisqually Living History Museum. On the drive south, the kids didn’t quite understand where we were going, and so whined a bit, but when we pulled into the parking lot, Jeff eagerly sat up straight.

“THIS is where we’re going? A HISTORY MUSEUM??”

It made me laugh, because I couldn’t figure out why Mr. History Face wasn’t excited about it before. But he bounded out of the car with glee once he realized where we were. 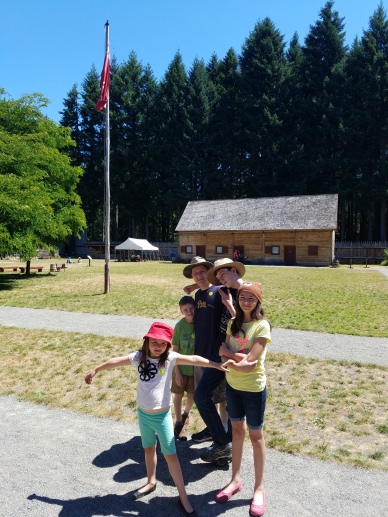 Fort Nisqually is a recreation of the British trading post that was around in the early 19th century (I think the 1830s were its heyday). It specialized in the fur trade, and shut down when Washington was later signed off as part of the U.S.

All the usual great history stuff was there: the general store (with a surprising amount of real fur pelts to touch), the carpenter’s yard, the blacksmith shop, an archaeological dig, the kitchen garden, and some women weaving/stitching on the porch of the head officer’s house.

Jeff was a little disappointed that there wasn’t more of a military aspect to the museum. (“Where’s the armory?” he kept asking) but it was a trading post, not an army post, so there wasn’t much in way of guns or cannons. Sorry, Jeff!

After the museum (Katie wore out quickly, and I had to drag everyone else away from their checkers games) we discovered an old-fashioned soda fountain a little ways down the road from the park. 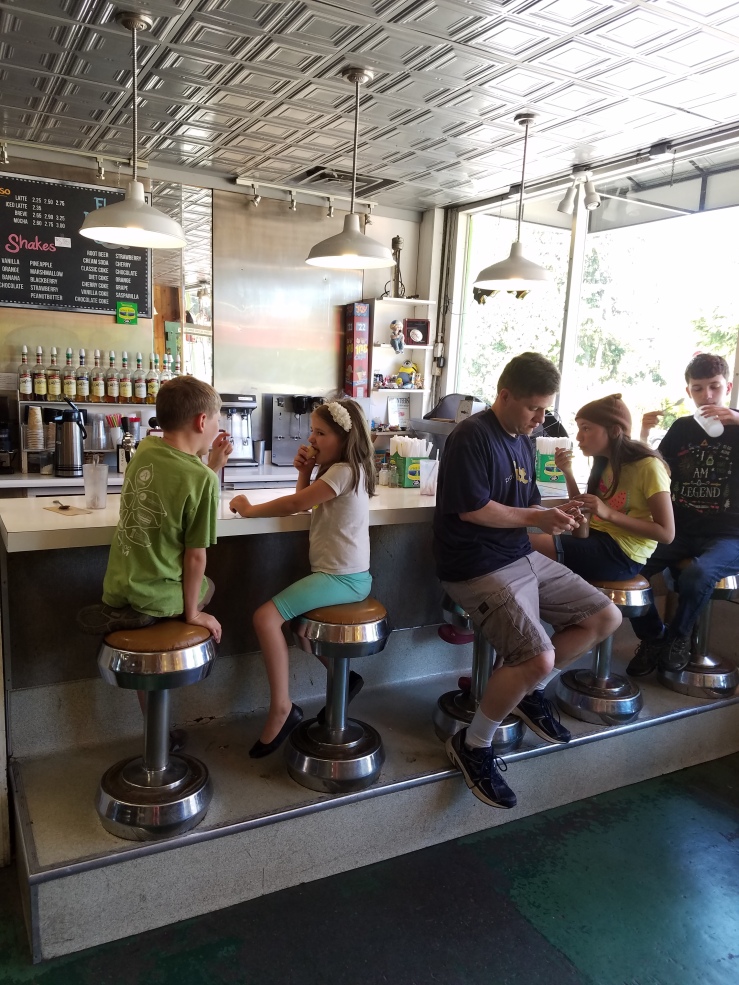 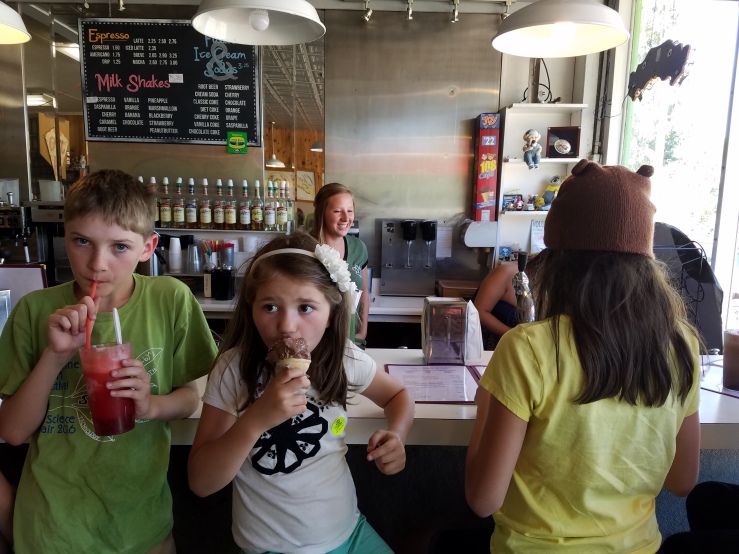 It has swivel stools and everything! You can order a phosphate and an egg cream! They make sodas by spraying soda water into glasses of syrup!!

I was too chicken to try the egg cream or phosphate, but we all wanted to try different ice cream floats.

So refreshing! We had a little extra time before our final destination, so we decided to swing by the Brown & Haley factory store, i.e. the Almond Roca store.

This was all about Brian, folks. Almond Roca is his favorite candy (just like his dad) and there was a certain light in his eye when he realized he could pick up bags of factory seconds for $.99 cents. (Also, Elvis was once in that building. There’s a plaque on the wall and everything. Just so you know.)

For the end of our day, I wanted to try something very new: a place called Tinkertopia, which is an art supply shop/studio for kids . . . but all of the supplies are recycled materials. It’s run by two artists, one of whom is a former preschool teacher, so it’s incredibly well-organized. 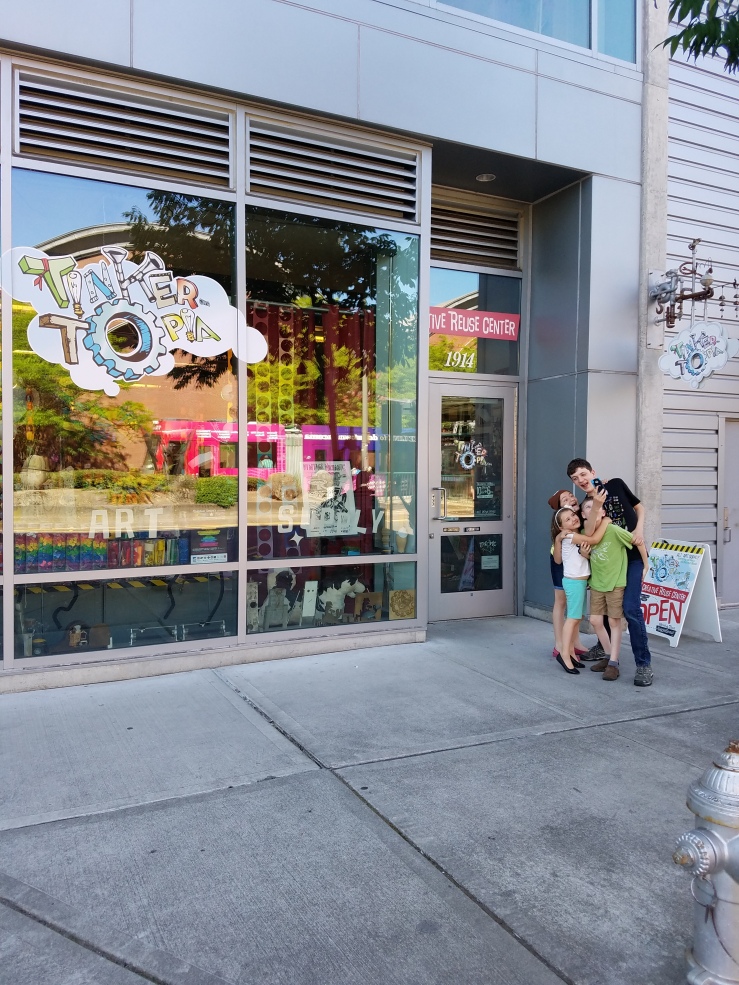 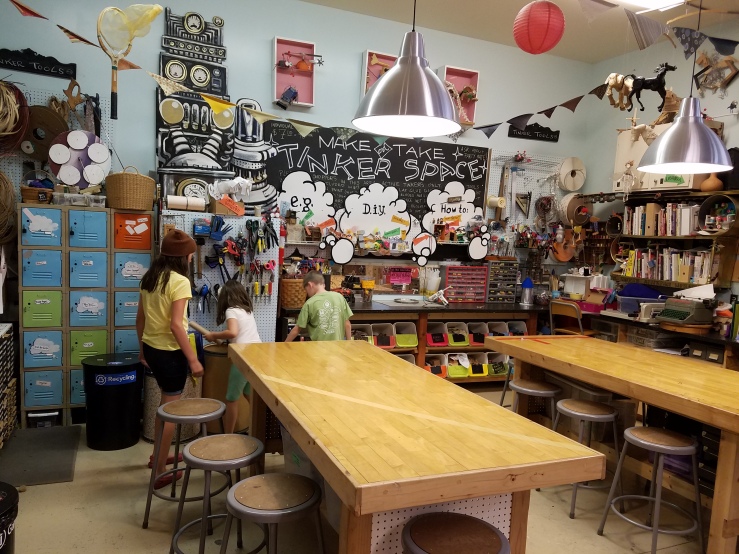 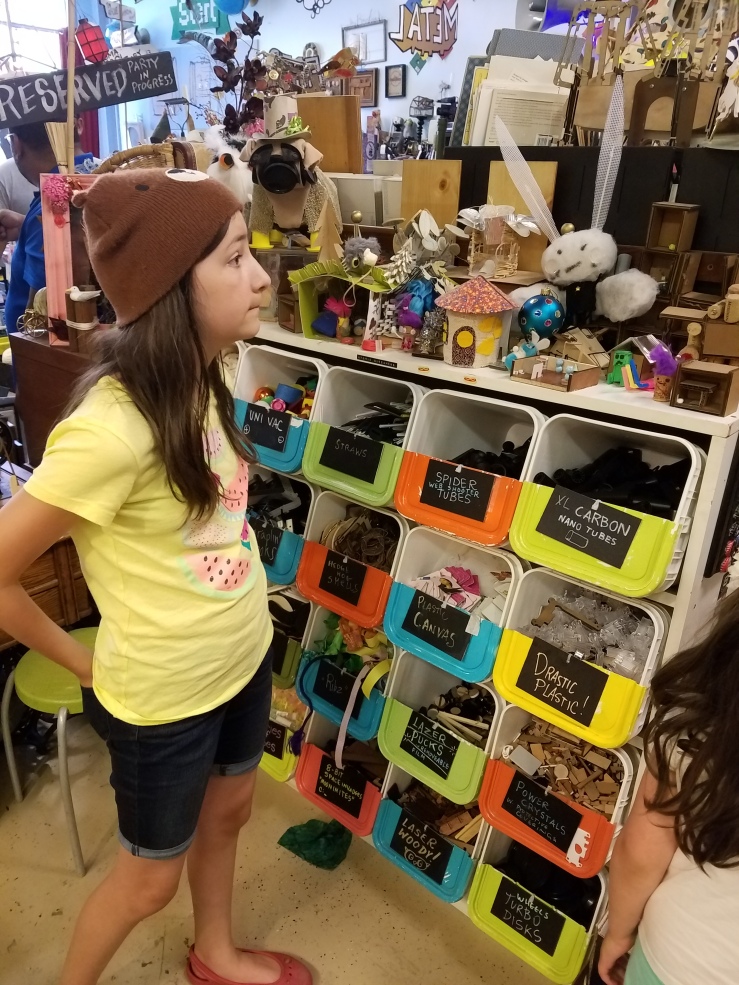 For $7 a kid, they were allowed to spend 90 minutes using anything in the store to build anything they wanted. There were drills, saws, glue guns, wood bits, reams of tape and stickers, baskets of pipe cleaners and staplers, fabric scraps, piles of paper, every kind of plastic doo dad imaginable, and a whole wall of Ellison paper-cutting dies. (My first library job had an Ellison die-cutting machine, and I still miss it.)

Jeff was skeptical until he realized he could use a hacksaw, and promptly got to work making a broadsword out of a mailing tube. It has a handle that slips out of the hilt and becomes a poisoned dagger!

Eleanor was a bit at a loss for ideas at first but eventually decided to make a little elephant statue. The head is on a bolt, so it can turn from side to side. So cute!

William didn’t have anything in mind, but simply started building and adding things at random. He made what he calls a “puppet thing.” There’s a handle on one end that makes the pipe cleaners on the other end retract in and out of the tube. 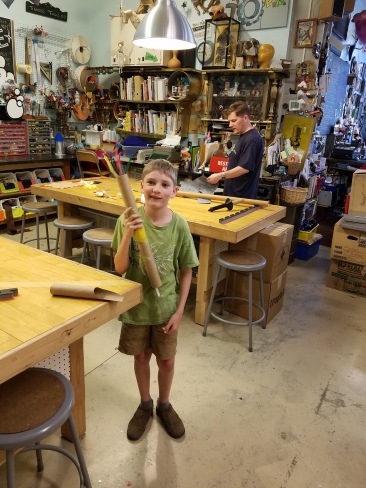 He then spent his remaining time making a cat “that shoots cuteness lazers,” which Brian and I think is also an apt description of William himself.

Finally, Katie! She’s the one who dove into building right from the get-go, making a bird sitting in a nest. But then she wanted to build something else, and roped me into helping her. 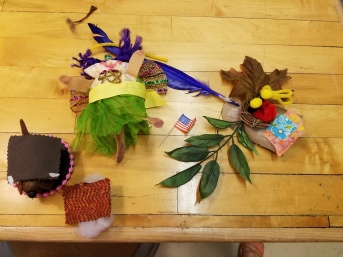 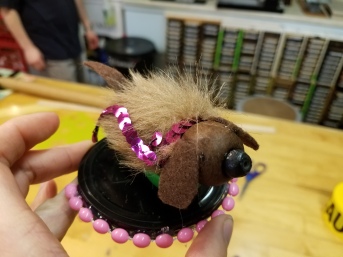 We decide to make a “stuffie fairy doll” — meaning a soft stuffed fabric toy — which was challenging, because while there were a lot of tools available in the studio, a sewing machine wasn’t one of them. I glued together a folded square of fabric, stuffed it, and glued it shut. Katie then found a string of sequin ribbon to cinch around the square to give it some head-torso definition. Katie drew on a face, and I glued on felt arms and legs. Katie found glittery ribbon, which I glued on as wings. And so on. Katie would find some spangly, sparkly thing to be part of the fairy ensemble, and I’d figure out a way to glue it on.

The gold star on the fairy’s tummy is a “wishing star” (Katie made an earnest wish that “she and the fairy would be best friends forever” before we glued it on.)

I honestly had a lot of fun adding more and more little details to the doll, like the silver crown, or the yellow sash, even if the ideas had to be negotiated with a six-year-old.

When the dolly was finished, we even had time to make accessories. Katie asked for a pet, so we fished some fake fur out of the fabric scraps bin and glued it to a cork for a doggie pet. A plastic Easter Egg half became a doggy bed, and a scrap of felt a blanket. Katie even found a bin of Christmas lightbulbs and chose one to be the “shot” that the dog will get when he goes to the vet.

While Katie picked out medicine, I hastily slapped together a matching silver crown for Katie to wear home.

And yes, I did fall asleep on the way home, why do you ask?