For the second year in a row, I fell into a fit of temporary insanity and decided to take my children camping at Moran State Park in the San Juan Islands. With a group of other moms and their kids.

And the insanity must have been more intense than usual because I decided to organize the dang trip this year as well. This was probably the most stressful part of the trip. It was really hard to get a firm “yes” or “no” out of people. Even up until the last few days before departure, I had a few yesses, a few nos, and an overwhelming wave of “oh, gee, I don’t know, maybe, keepmeintheloopI’mveryinterested.”

As a person who builds her comfort out of giant slabs of Planning Ahead, this was maddeningly stressful. But I get the reluctance. I think camping — even car camping — is intimidating to a lot of people. Yes, I’ll admit that it’s a headache to pack all of the stuff. But I’ve discovered that group camping with other women is really wonderful. We took turns preparing dinners and breakfasts, which makes packing easier (it’s far easier to plan for one big meal for 20 people than six meals for five people).

Our kids never claimed boredom, since there were always a pack of other kids to roam the forest with.

But best of all — adult convo! All the time! We’d tuck the kids in their tents and talk around the campfire, we’d chat while hiking, we’d converse while the kids splashed in the water — it was the best!

Once again, we stayed at the coveted group camping area at Moran State Park. It has its own bathroom with flush toilets. Fancy.

It also has no next-door neighbors, so kids can roam and play without bothering other campers, and we also have a nice sense of privacy. This year I also made use of the coin-operated showers in another part of the park. Many blessings on my teenagers, who were able to look after Will and Kate while I snuck off to get clean. (Ha — I think they were still asleep when I came back.)

We spent time splashing at the little swimming beach at the lake (and eating divine peach ice cream from the Lopez Island Creamery). 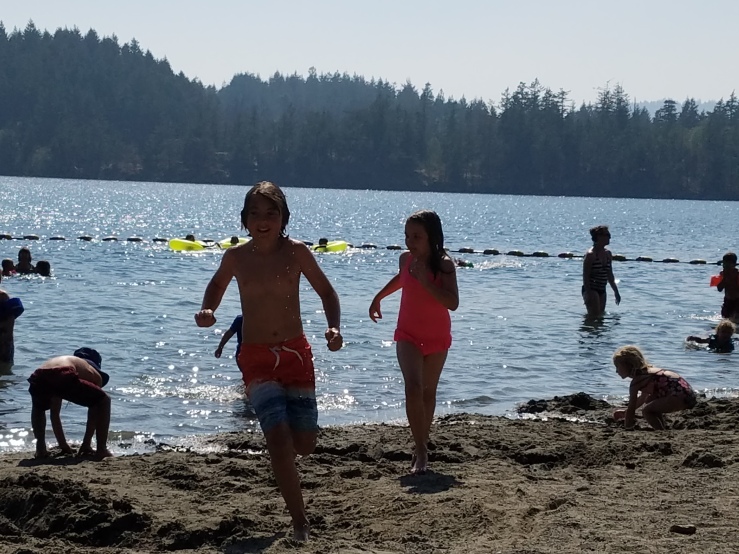 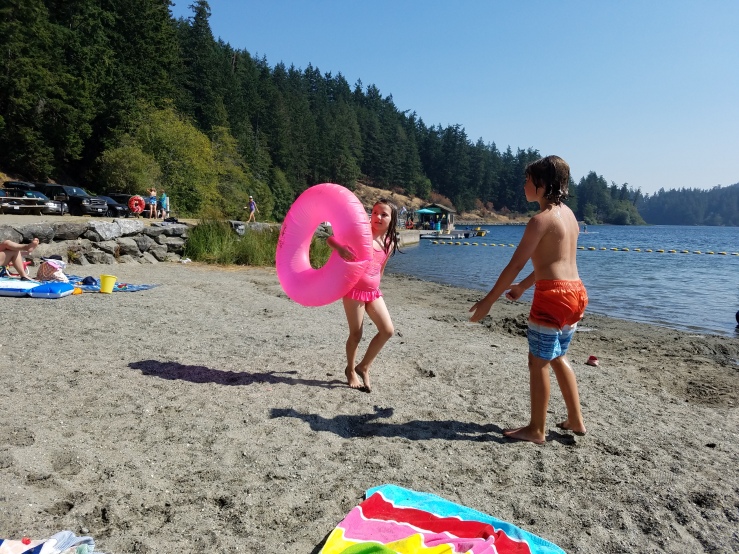 Another morning was spent hiking to a waterfall. I loved watching the kids swarm over the rocks to explore the water.

We took a different hike to a saltwater beach for lunch.

Evenings were spent toasting marshmallows and watching for bats to emerge from the sky. (So many bats! We loved counting them all.)

The next morning I had to head back early to get Jeff to the high school for Freshman Orientation Day. (Sigh, I wished I’d known about this conflict before I made the campsite reservation.) So we struck camp early (I hereby congratulate myself for correctly figuring out how to fold the tent back up into its infuriatingly tiny bag) and headed off to the top of Mt. Constitution to explore the lookout tower.

It was early enough that we pretty much had the place to ourselves. Which was great, but it also meant that we were so early that the ice cream stand hadn’t opened yet. Have no fear — we made sure to stop at the swimming beach on our way out of the park to get our cones. Dang, that peach ice cream is the best. My mouth is watering just thinking about it now.

Looking forward to 2018, I realize that our summer schedule won’t allow for this camping trip again — our school district is shifting the school year forward, so we will have a very short summer, and I’ve also come to realize that the two weeks before the start of school will likely be stuffed with cross country practices and “back to business” days.

Sigh. Maybe we can convince Brian to come along for a weekend some time. We’ll see. Glad I could take the opportunity for this adventure while I could.