We decided to close out our summer with EVEN MORE OUTDOORSINESS — a trip to Mt. Rainier National Park, coupled with a side trip to Mt. St. Helens.

And why not start out the visit with a hike? We headed out the door early so we could play in the park right off, before even checking into our hotel.

After picnicking at the Longmire Visitor’s Center, we hiked up the Pinnacle Peak trail, which starts across the road from Reflection Lake.

There were lots of huckleberries on the trail — and as we knew from our visit to Glacier NP, hikers are allowed to pick and eat them (soooooo yummy). 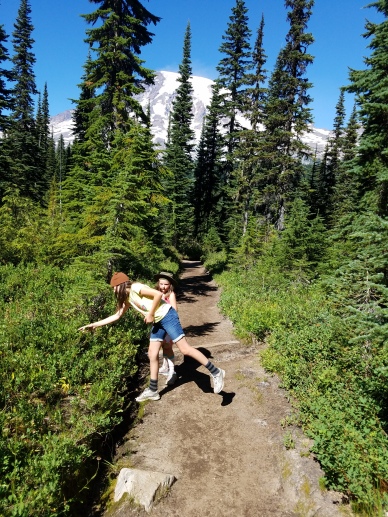 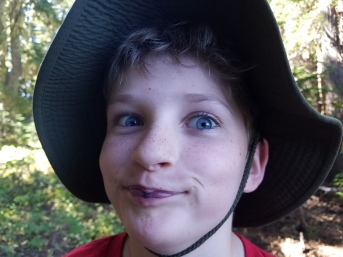 The bright, cloudless sky didn’t make for the best photos (too many shadows on our faces) but wow, the views. The views! Like stepping into a postcard. 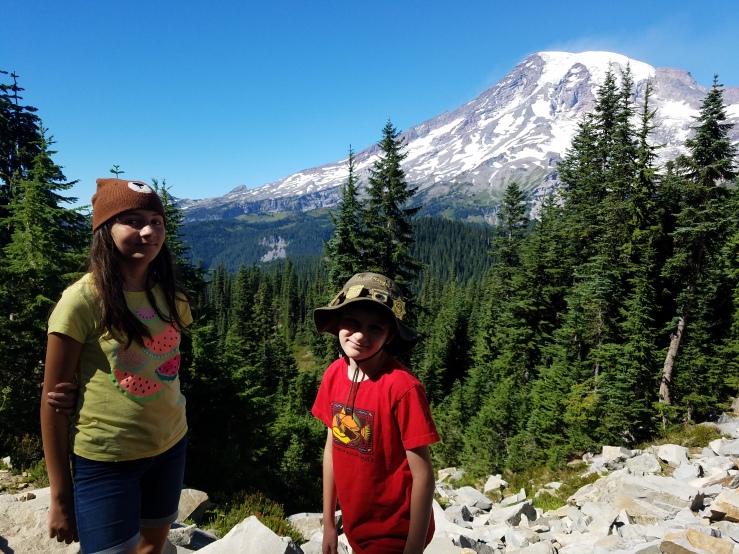 And impressive as the view was, I’m equally as impressed with myself — I had spent the spring and summer doing strength training/interval training, and found myself miraculously climbing up the hillsides without stopping for breath once! Wow, I’ve never been so happy with what my body can do. (Katie, on the other hand, had a very hard time hiking. But that’s life with a six year old.) 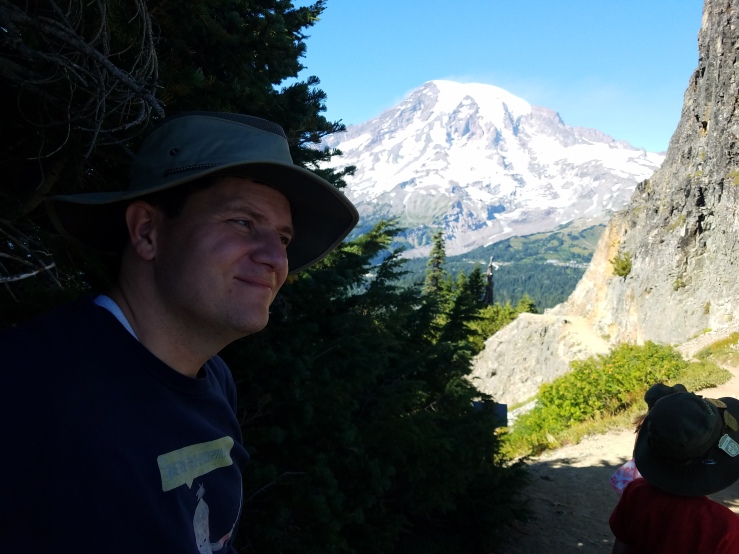 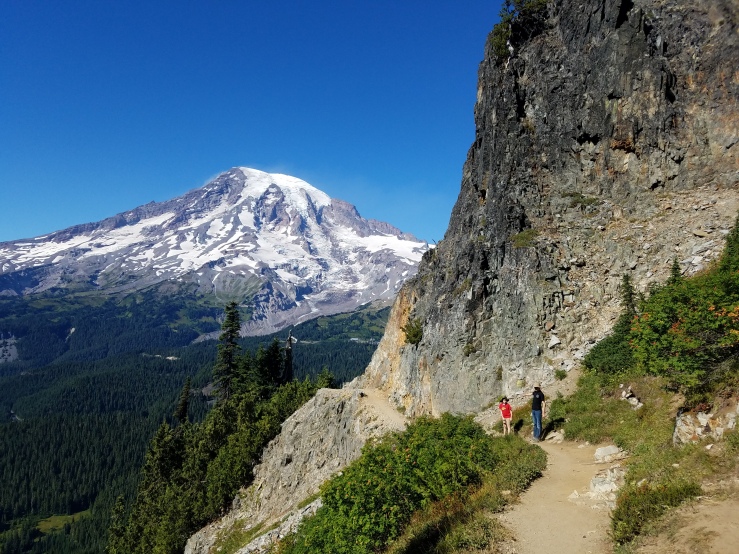 When we were finished with the hike, we spent a moment or two admiring Reflection Lake. It’s graced the cover of many a coffee table photography book. Although again the bright sunlight made it difficult to have both mountain and people in the frame. 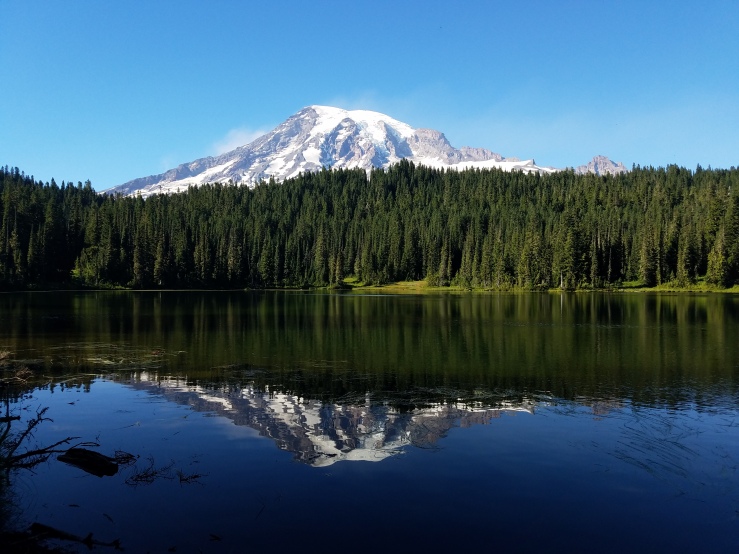 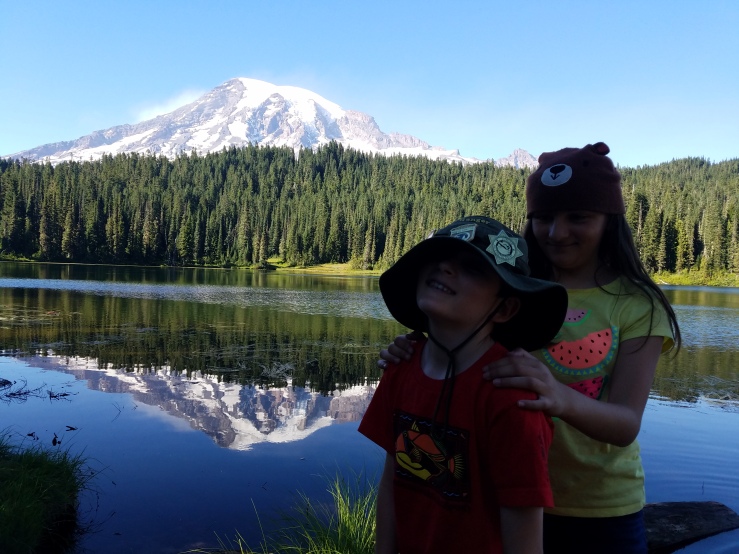 Our next destination was our hotel — or so we thought. We arrived at our destination only to be told a wild story about how the motel has new ownership and all records of previous reservations had been lost in a computer crash. When I expressed the appropriate level of dismay, the story changed to something about the previous owners being thieves, and the person at the counter’s daughter was the one who really knew what was going on . . . . and yeah. Something fishy was going on, and I think I was being lied to. It was obvious that they were trying to turn the motel into long-term housing, based on the number of people lounging in recliners outside the motel doors.

Anyway, we were able to book a room at one of the condos in the White Pass ski area, and it was reasonably-priced enough for a family of six. Still. I can’t shake the icky feeling. Eh, no harm done. I guess.

Since it was Labor Day weekend, the town of Packwood had a street festival going on. We decided to get dinner there. Wow, the best, most massive burritos I’ve ever seen. There were chunks of ham in the refried beans! Epic. 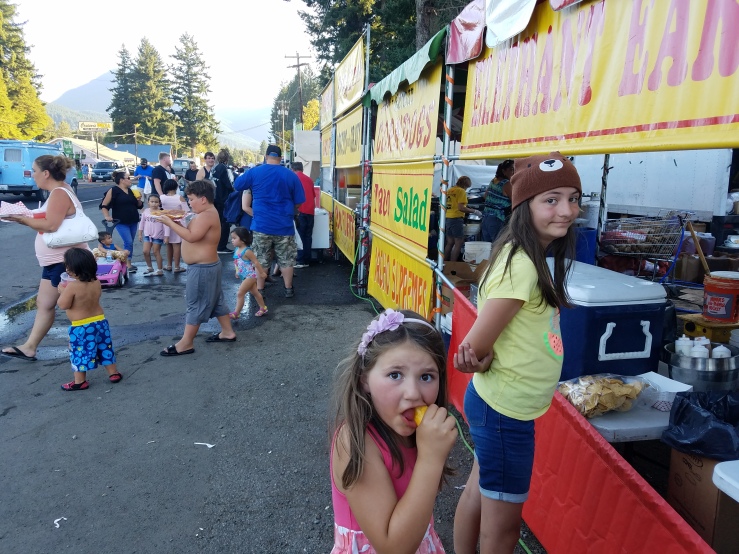 On the drive up to our new lodgings, we stopped for an evening hike in the Grove of the Patriarchs. It was fun, although it grew very, very dark on the way out. Silly us for not bringing a flashlight. 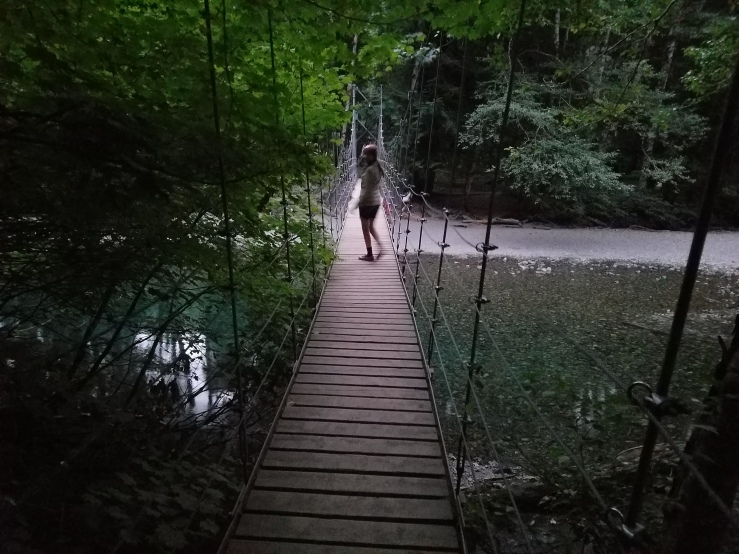 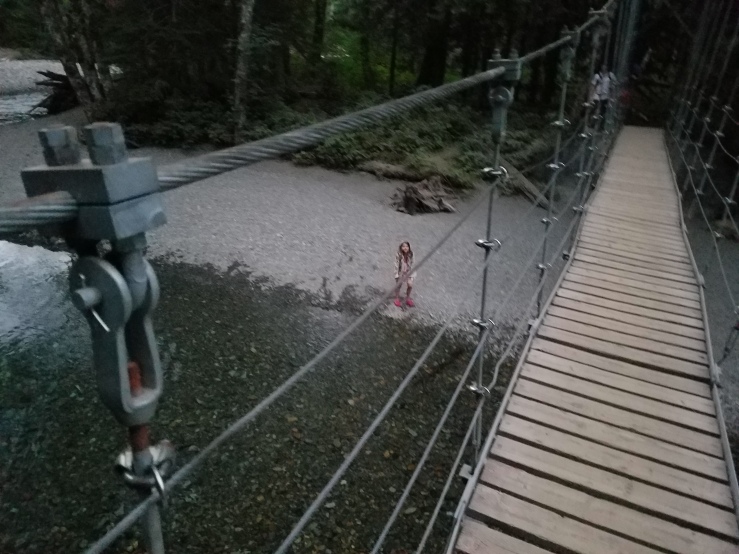 We also stopped at the Paradise Inn parking lot for a ranger-led stargazing session. Similar to our experience in Glacier NP, we got to peek at Saturn and Jupiter via heavy-duty telescopes. And once again we were all singing Ganymede. Someday our teenagers are going to wise up and throttle their nerdy parents, but not on this trip.

We designated Day Two of our trip for exploring Mt. St. Helens. Brian and I had spent a lot of our elementary school science classes studying the 1980 eruption. Because of this, we had the childhood impression that the eruption was something that had just happened, but in reality the event had to be at least 6-8 years old when we were learning about it. Still, I guess in geologic time that’s the same as something just happening.

I guess what I’m trying to say was that Brian and I were really excited to see this place for ourselves, after hearing about it over and over while growing up.

Since it isn’t a national park, visitor facilities are kind of limited around the mountain. We were running out of water after lunch, and saw on the map that there was water available at an off-the-beaten-path trailhead.

It turns out that it was a hand-cranked water pump, which was kind of awesome.

After loading up our water bottles, we headed into the famous Ape Caves. These are 2 miles of lava tubes that go under the mountain, and they were fascinating. Sadly, they are also difficult to photograph properly. Since it was also a holiday weekend, it was also very noisy with big groups of hikers passing through.

There were patterns on the ceiling of the lava tubes that resembled the bones of a rib cage, so the kids had fun pretending they were walking through the belly of a dragon. Minus the fire, I suppose — it was very cold in the caves and we were glad we’d been given the advice to bundle up in hoodies before going inside.

The rangers at the cave entrance were trying to educate everyone about the bats that live in the cave, and how they are at risk of disease brought in by hikers. So everyone was encouraged to sweep contaminants off their shoes before and after going in the caves.

Day Three of our hike began very early in the morning, as we were wanting to beat the crowds to score a parking spot at the Paradise trailhead. We did stop for a quick leg stretch at Reflection Lake again, though. The sky was overcast, hooray!

Our wake-up-early strategy paid off, and the usual cattle call of people at the Paradise visitor’s center were all still asleep. The famous Skyline trail was almost empty as we headed off. 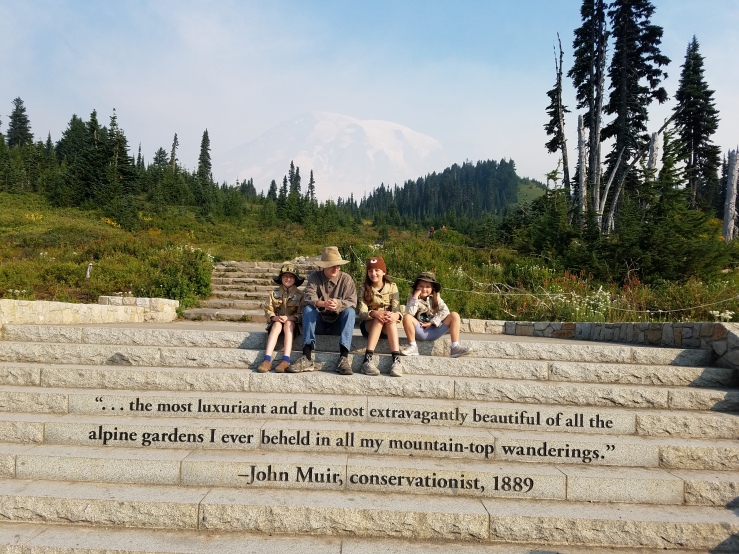 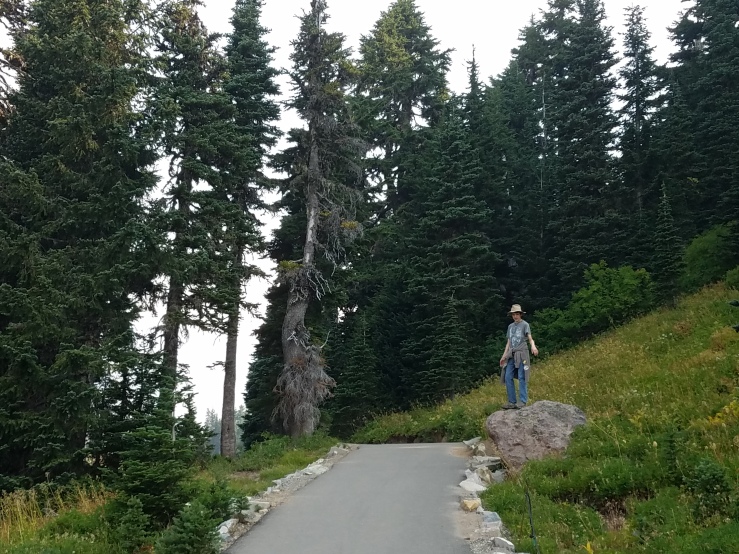 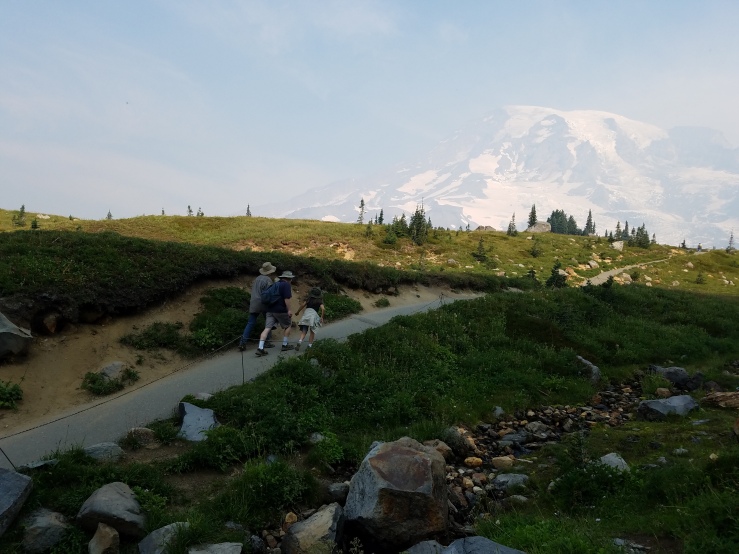 I know it’s almost a cliche in Washington State, but I really love the Skyline trail. Best of all, I was once again surprised at my body’s improved endurance. Four years ago, I wore myself out, gave up and turned around before reaching Panorama Point. This year it was a breeze. 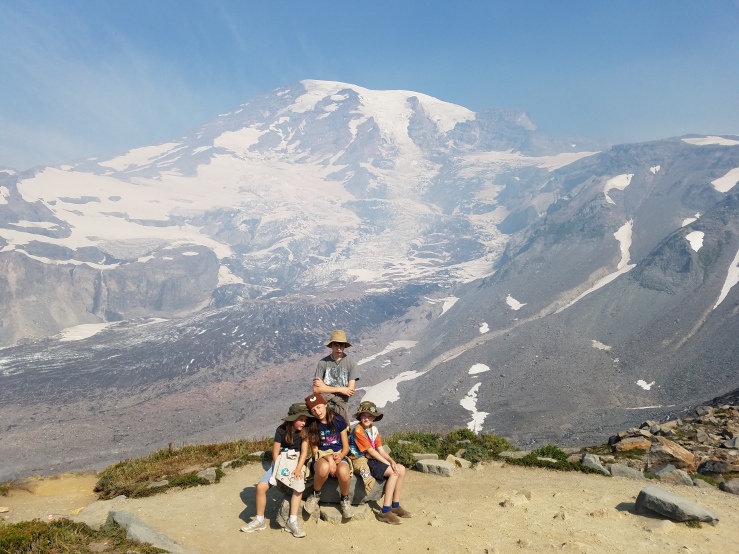 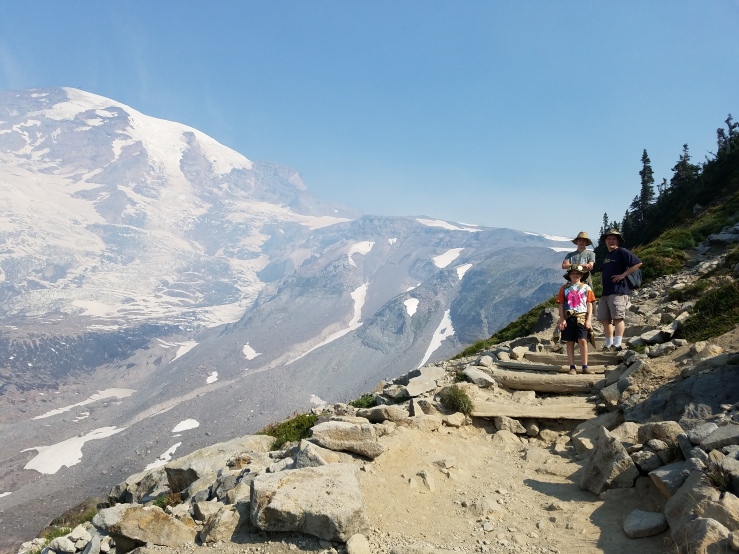 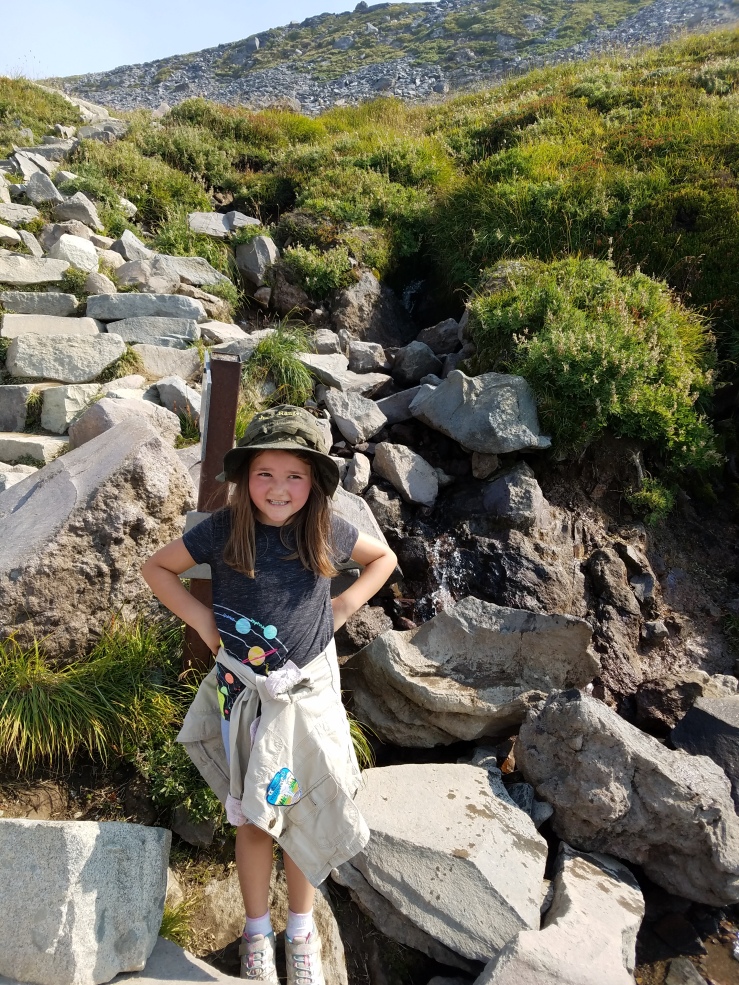 The only downside is that because of forest fires, Panorama Point was less than panoramic.

But we did get to use the funky experimental foot-pump trail toilet!

At least the views towards the mountain were still stunning. The hike downhill mostly tracked alongside a little stream as it wound back down the mountainside. We also got to pass alongside some snowfields. Occasionally we’d look down and see would-be mountain climbers training on the snow.  Absolutely delightful. 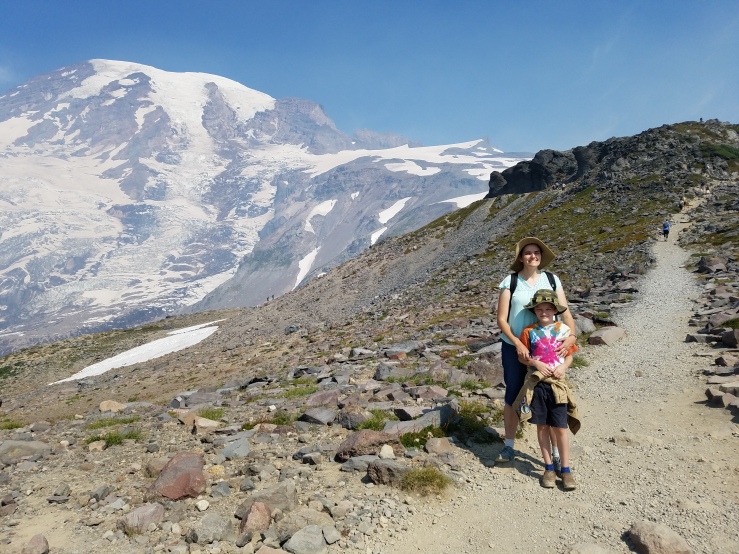 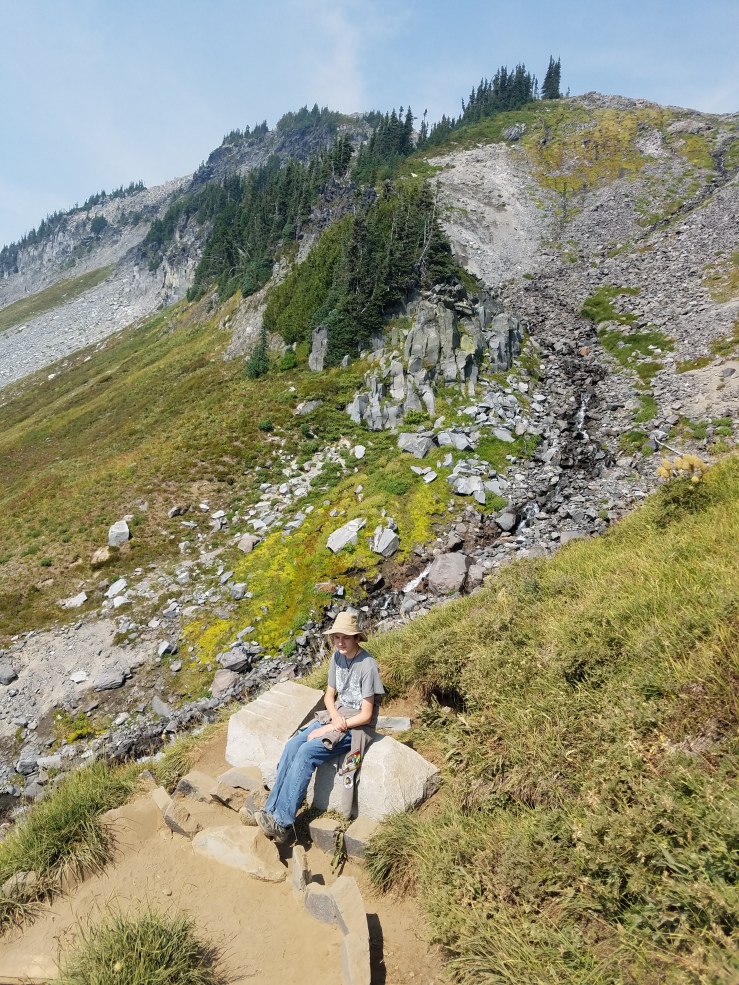 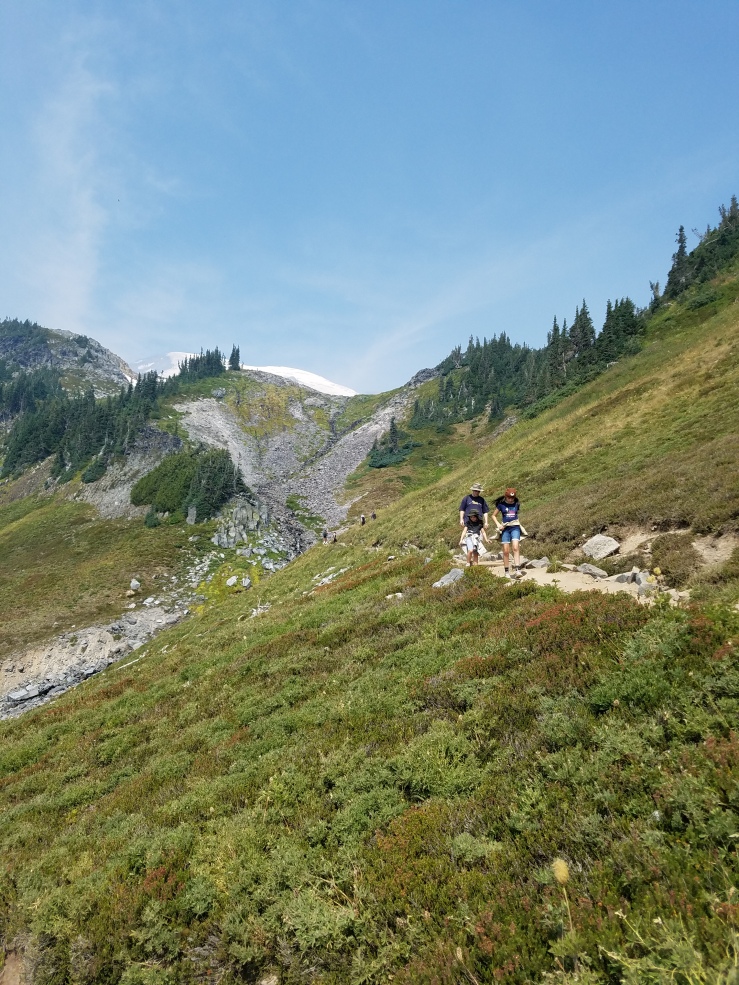 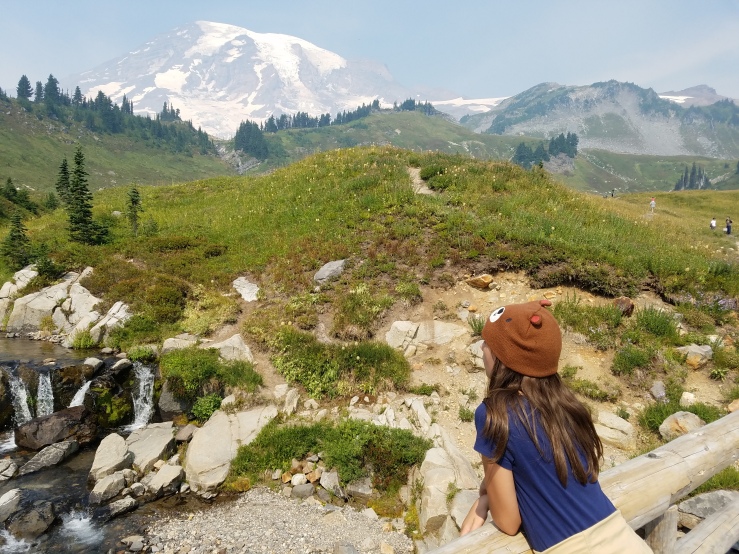 The Paradise visitor center was terribly crowded when we finished hiking. I’ve heard that national park attendance has increased at such a rate that park resources and infrastructure can’t keep up, and that was clearly in evidence there. Every garbage can was overflowing onto the ground. The lines for bathrooms did not quit. Every picnic table, bench or other makeshift seat was occupied. We had planned on eating there ourselves, but decided to just putter around the museum/gift shop for a few minutes and then get out of there.

We stopped in Longmire for lunch instead. It was a little sad — during our previous visit four years ago, the kids spent a long time playing in the forest around Longmire, pretending and imagining and having fun (I remember Katie waving two sticks over a log and saying that she was “cooking”). 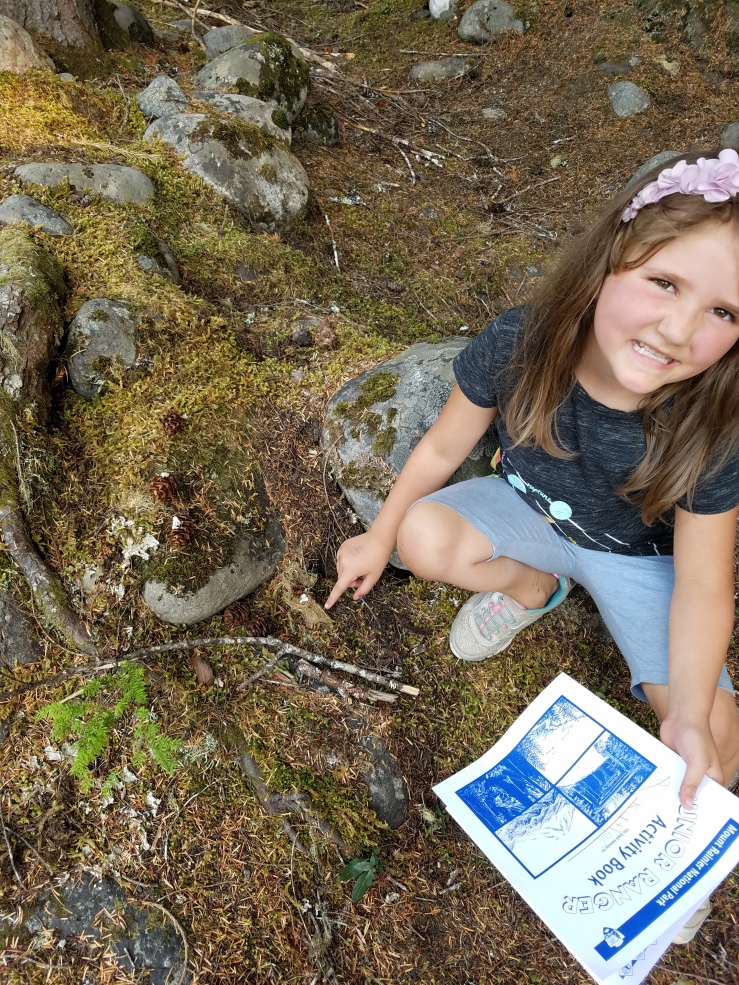 But this time around, only Katie still wanted to pretend-play in the forest. Which she did for a while (she made a “pinecone family”) but it just wasn’t the same. I know that part of what was going on was simply exhaustion — we had been up since the crack of dawn and all — but it was still a reminder that the days of pretend play are coming to an end, and it makes me sad.

At least we’re fostering a love of nature that won’t grow old anytime soon. Hooray for mountains and forests and the trails that take me there!