For the past few years, the only “summer” weekend we’ve found available to host a Backyard Circus is the one after school starts. Here in the PNW it’s still just baaaaarely warm enough for swimsuits and leotards, and all of our friends are back in town after a variety of summer travels.

Which means that the first day of school and circus shenanigans are becoming inextricably linked in my mind.

But . . . I mean . . . look at my kids in these pictures and you can see that the first day of school isn’t so dissimilar from a circus in the first place.

“Let’s All Stand Still for a Portrait Now, Children” 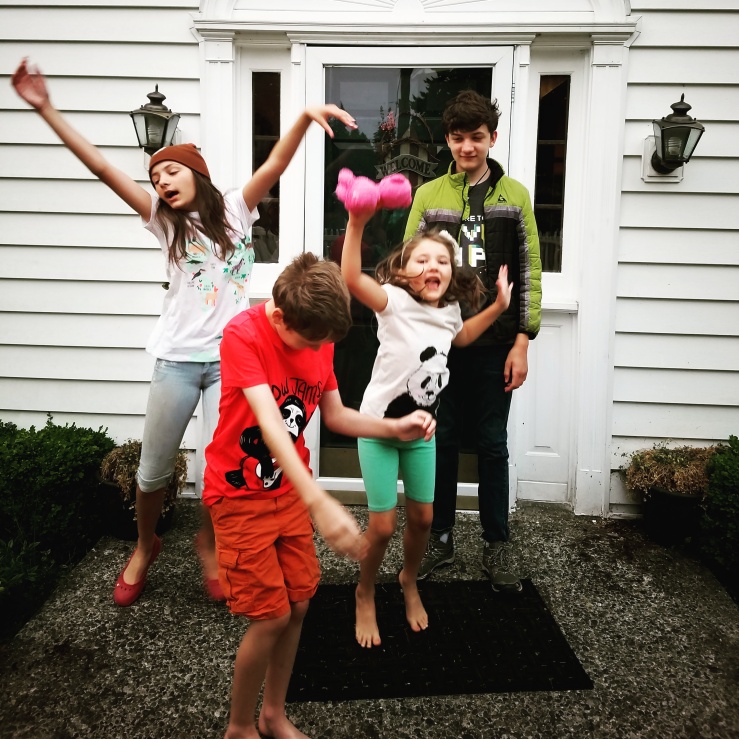 Sigh. This was Jeff’s first year of high school, but because of Seminary, I really didn’t get a chance to photograph him on his Official First Day. But I did get a picture of Eleanor riding her bike to the first day of middle school.

And a picture of Eleanor at cross country practice:

And a picture of Eleanor’s (recycled) Toadette cosplay from when she went to Geek Girl Con with her Girl Scout troop and apparently mopped the floor with the competition at the Super Smash Bros. tournament:

And I also snapped a pic of Katie on her first day of first grade. She picked the outfit herself. Yes, that’s a too-small Christmas sweater paired with teal bike shorts. After four kids, I’ve kind of given up on the custom of looking presentable on the first day of school, or anywhere, really. Let Them Be Quirky, I say.

Eleanor also got to come visit the elementary school for Back-to-School Night, and she was very pleased to see her 6th grade art project in pride of place on the wall of the “pod.”

Oh, and needless to say, I was so thrilled to have all the kids back in school that for a while I made them a fancy snack each day. Yeah, impressive. Don’t worry, things dropped back into normalcy soon enough. 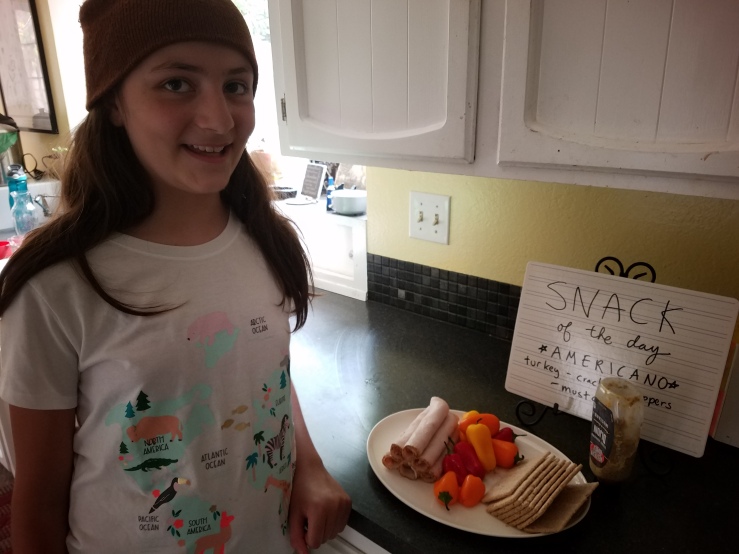 The best thing about this year’s Backyard Circus is that my friend Margaret won the services of a professional face painter at a silent auction, and decided to donate them to our circus! How awesome is that? 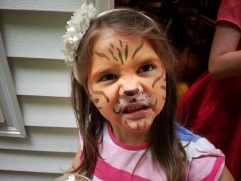 Katie chose to have her face painted like a tiger’s because her circus act was a tiger-taming routine. Eleanor was the “trainer.”

William’s contribution was a magic act. He took this very seriously, much to everyone’s delight. 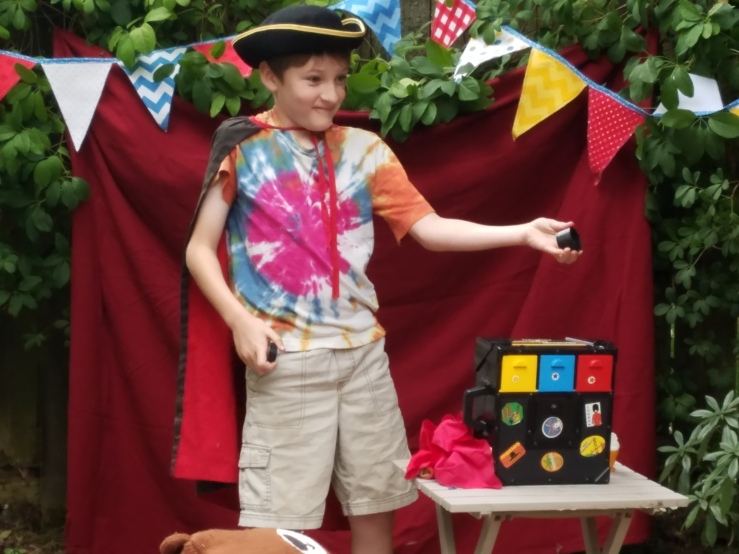 And this was the year that I finally, finally talked someone into being a “snake charmer.” Or at least, Eleanor’s interpretation of what a snake charmer is.

This was also the first year that we had a family put together a series of sideshow “freak” routines that was simply hilarious. (Just picture two kids in one giant shirt and you’re halfway there.) Plus two more magic acts, acrobats, and juggling. All in all, a great showing for the 2017 circus. (Come to think of it . . . I think this might mark ten years of doing Backyard Circuses. Wow.)

Other September Items of Note:

The September Piano Recital. We didn’t have to sit in the backyard overflow section this time! I think this was Katie’s first piano recital. I think. They’re all starting to blur together.

JEFF TURNED FIFTEEN! We had friends over for pizza/games/cake, but somehow I didn’t take any pictures? Probably because I was trying to avoid eating cake at the time.

I also finally finished knitting this blanket to donate to refugee relief. I’d been knitting the individual squares all over the place over the summer (at Glacier NP, in the San Juans, a barbecue potlucks, at the side of swimming pools, in a wheat field while waiting for an eclipse. . .)

William received a membership to the Museum of Flight for his birthday, and I took the little kids on their first trip. Airplanes and space shuttles galore! 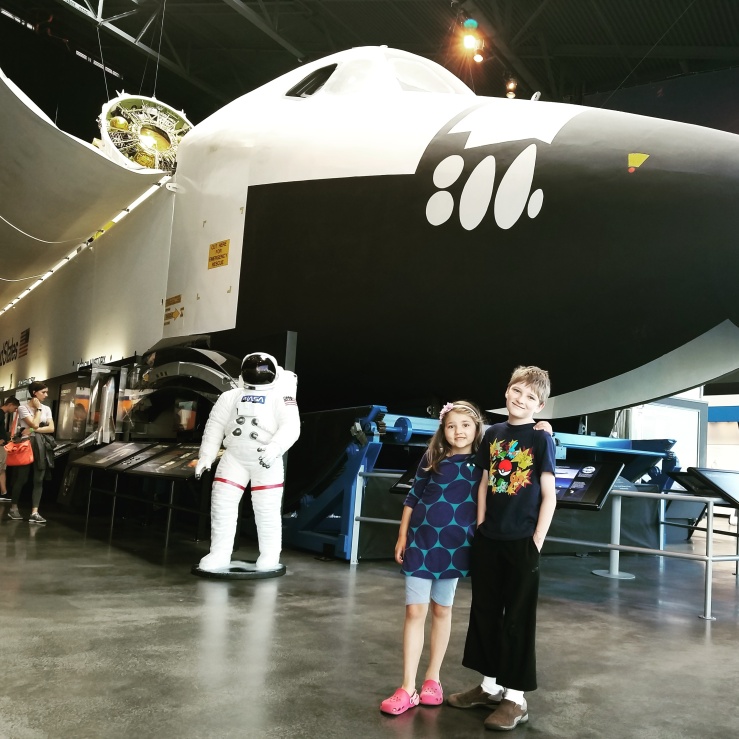 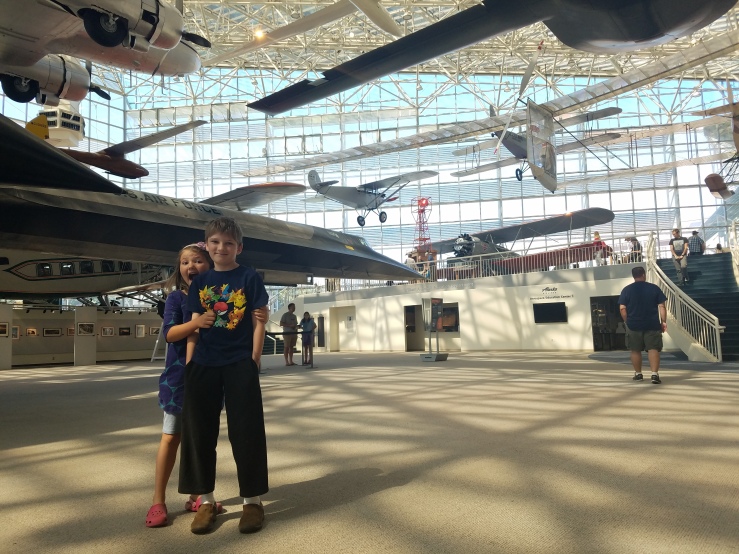 Katie and William participated in the Primary Program at church. (Sniff, only two kids singing this time!) 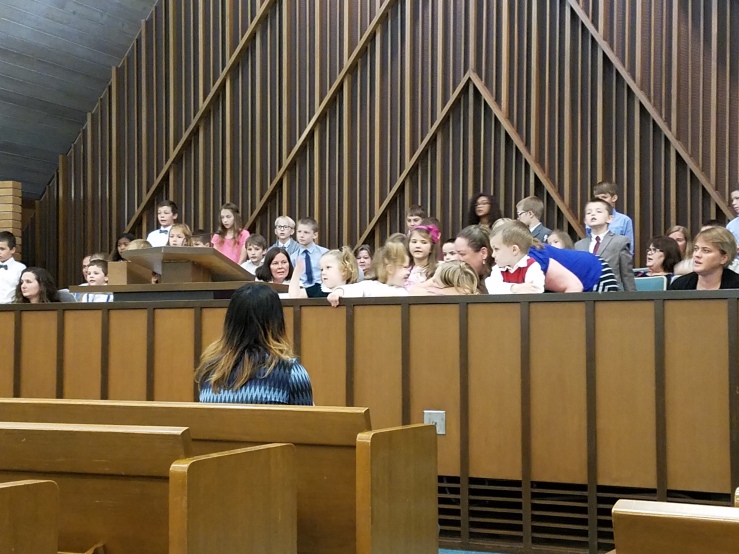 And Eleanor and I enjoyed the Women’s session of General Conference by eating hamburgers together. Thanks for the memories, September!